Clashing with this game, I was invited to go out to MONA and see Robert Forster. My gut reaction was noooo – its a huge game and I’ve got to watch it live. And Forster, aaaaah it’s great music but he’s such a knob. In the end, the gig won out. A night out with old friends can’t be recorded and experienced later like the footy. And Forster was actually great fun. I maintained radio silence and came into the house with no knowledge of the score; although I did sing Tigerland in the car on the way home. Optimism has become the new default. Turns out there was five minutes left and we were gone out of sight, it was our night. I have watched the replay and these are the highlights, celebrations and frustrations.

Embed from Getty Images
Clashing with this game, I was invited to go out to MONA and see Robert Forster. My gut reaction was noooo – its a huge game and I’ve got to watch it live. And Forster, aaaaah it’s great music but he’s such a knob. In the end, the gig won out. A night out with old friends can’t be recorded and experienced later like the footy. And Forster was actually great fun.

I maintained radio silence and came into the house with no knowledge of the score; although I did sing Tigerland in the car on the way home. Optimism has become the new default. Turns out there was five minutes left and we were gone out of sight, it was our night. I have watched the replay and these are the highlights, celebrations and frustrations.

It’s very wet which suits us. It’s Bachar’s 200th, and I don’t remember a player held in such universal respect by Richmond people for what he has brought to our club and the footy community.

@masonsixtencox gets a charity free immediately and does the right thing, shanking a behind. A note for the rest of the game: umpires guess ruck frees and so do commentators, because there are NO RETIRED RUCKS COMMENTATING. Why is this? I think Grundy has done a little bit of special comments; but tonight he’s out there grappling with Ivan II.

The inaccurate ones, Bruce and BT are competing from the go for the worst howler. “Short, missed out on that grand final last year”. Then Treloar goals, he has great hands in the wet. Dusty handpasses to stationary Ivan II who is unfazed and flicks it on – everyone in this group trusts everyone else, it’s amazing. Houli and Vlastuin exchange handpasses while galloping the wrong way, brimming with confidence that openings will appear around them if they hold their nerve.
Embed from Getty Images
Bolton gets it out wide and will always think of shooting first. In isolation this annoys me a little, when he has mates lining up in better positions; but in the big picture it’s good to have at least one goal guts. Vlastuin has started magnificently; his slalom run out of the back pocket another display of poise. A good sequence comes to Dusty who is a way out but the pure authority of his finish for our first goal lifts the team and the fans. Sidebottom has probably never had a worse quarter – his boots are on the wrong feet. Ellis hears his footsteps and Sidey takes possession but sprays his shot horribly. Bruce: “Crisp, strong in the hips” – I reckon he reads a lot of WH Auden.

Lord David Astbury absolutely nails Mihocek, everyone gets up with laughs all round. The wet footy is intense and even, the game hasn’t settled into any pattern yet. Then, Lynch is lucky twice. Goals from a cheap free, then is allowed to spin around and around in a tackle before dishing to Shai; goal. We’re off. “Graham, with his heavy hips” Bruce, I will pay you to stop talking about hips.

The soccer kick is the order of the day. Cotch and Dusty go to hoof the same ball off the deck – Cotch pulls out of it and I think that is when he gets a hammie twinge. He’s off for the day, but seems extraordinarily chirpy about it. He’s also waiting for news of his third baby being born. 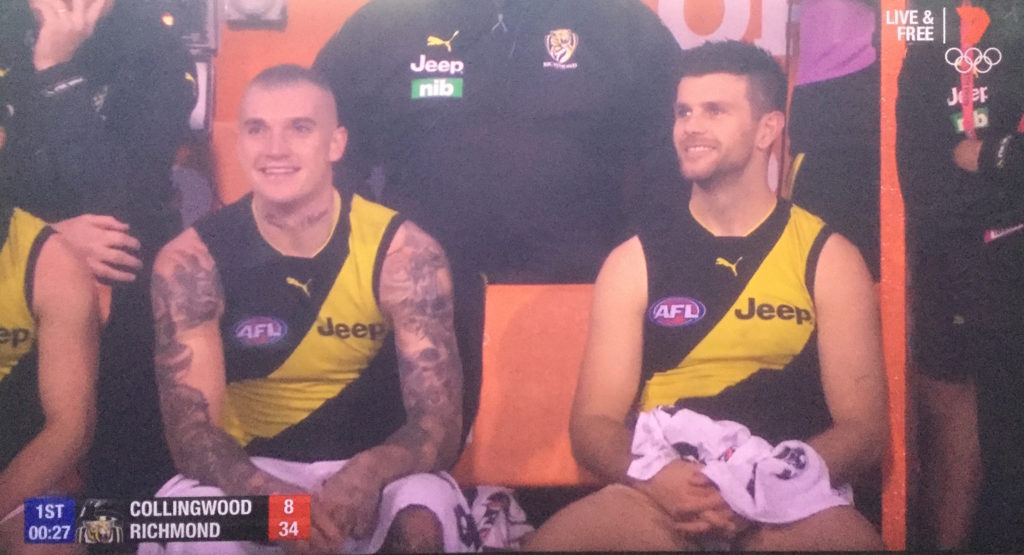 Unusual to see two gun players on the bench with big grins all round, a minute before quarter time. Especially when one is already done for the day.

Lynch is pretty slow in a straight line, but that’s not surprising. I hadn’t realised he has played every game this season – that is admirable coming off his serious injury and no pre-season. Sidey and Pendles are not firing and De Goey invisible, Stephenson and Moore missing. We should be flogging these guys.

More ruck free kicks. Grundy gets one and while Ivan looks to the ump for the mark, behind him Grundy just gallops away and kicks a point. Up the other end Ivan wins the ruck lottery, and goals from his free kick.
Embed from Getty Images

Broad kicks to Short, who kicks to Houli, who unloads with a huge woooof up the left wing to Riewoldt who outmarks Howe, spins and kicks it out in front of Lynch. Tom gallops onto it and goals, sensational team footy. 5.4 to 1.2 and quarter time.

In the 2nd Q we dominated every moment until one minute to half time, when we spoiled it by coughing up two quick ones.

Tiges win every one-on-one in the first 90 secs. De Goey misses and it goes down the other end for a stunning goal. Lambert kicked from the centre to Lynch on 50. Lynch turned and launched a kick to the vacant goals, but by the time the ball landed Lambert was there to toe it through. Insane running. Marbs sells a dummy, nonchalant. We are playing off Dimma’s short pitch, as Astbury is taking intercepting marks at the front of the square. George seems to be drifting into defence more, he’s everywhere applying pressure and linking up.

In defence a Pie marks, plays on but has no idea what to do, and drops it at Dusty’s feet. He holds the hapless Pie at bay while he side-foots the sherrin to Stack who goals, its 46 to 9. Collingwood are a rabble. Marbs executes an off-balance drop-kick. Lynch goals again after the ball goes straight through Crocker’s marking attempt. Soldo is matching Grundy.

Jack and Tom team up for Tom’s 4th. Lynch hacked it in Riewoldt’s direction, leaving him a lot to do. But Jack is up to it, and in return lays it on a platter for Tom who nails the shot on the run, 61 – 11. Then we take the foot off the throat and allow a couple of Pies goals for a half time score 61-24. I think Collingwood may have run up the white flag at half time otherwise, it’s been that one-sided.

I’ll be brief with the 2nd half, which was a little disappointing really. We don’t goal for most of the 3rd Q, then Martin marks and kicks it round the corner. He has been BOG. Grimes hasn’t had a mention yet but he has been just flawless in his timing, decision-making and leadership. Bruce compares him to Ben Hart, then Sydney Stack to Andrew McLeod. “If Grimes and Stack end up as good as Hart and McLeod they’ll be happy with their careers…” uhh respect to Hart but Grimes is a better player already, thanks.

De Goey goals, then Jack Riewoldt thumps a big goal from 55 after a delicate pass from Jack Graham who has hit his namesake on the chest twice this quarter. At 3QT it’s 78-40.
Embed from Getty Images
In the last quarter we are finessin’ in forward 50. We’ve got three tall targets, and Dan Rioli pinpoints Marbs who is a lovely set shot. The Collingwood president leaves as Crocker hits the post. It was a lovely touch from his Channel 7 rivals to linger on his furious red-faced antics. Final score 98 – 66.