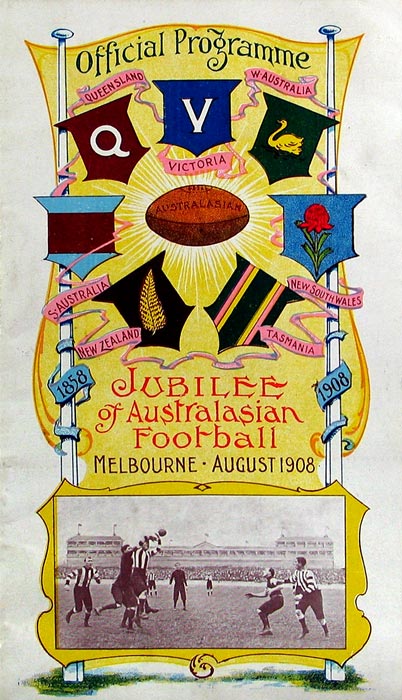 I was visiting a mate in West Hobart once, when he pulled out an old Interstate Football Carnival programme, I think from the 40s or early 50s. He found it under the house while renovating. (This is not it, I just found this on a fascinating site called Boyles Football Photos).

It listed the state team colours, and where I expected it would say “TASMANIA: Green, red and gold” it actually said “Black, primrose and rose”. Those were the days of course when the Dees were “The Fuschias” and the Hawks were “The Mayblooms”.

This is the first time I have actually seen the black, rose and primrose – I am guessing the shields more or less reproduce the guernseys. Interesting also to see that SA was a dark maroon and sky blue in those days. And, of course, that New Zealand were involved. Fat chance of recapturing their interest now when we send St Kilda and the Lions over there to showcase the game.