Writing this recap was not the only privilege I had bestowed upon me on Sunday, as we (Dad, Nan and I) were invited into Richmond’s Inner Sanctum. It’s a once a year sojourn where Richmond attempts to woo us, giving us a taste of the next level of membership, a dalliance with the upper echelon, in the hope that we’ll upgrade. It’s somewhat flattering. Sunday morning involved a pre-match briefing with Tim Livingstone and Andrew McQualter, walking on the hallowed turf itself
Embed from Getty Images

Writing this recap was not the only privilege I had bestowed upon me on Sunday, as we (Dad, Nan and I) were invited into Richmond’s Inner Sanctum. It’s a once a year sojourn where Richmond attempts to woo us, giving us a taste of the next level of membership, a dalliance with the upper echelon, in the hope that we’ll upgrade. It’s somewhat flattering.

Sunday morning involved a pre-match briefing with Tim Livingstone and Andrew McQualter, walking on the hallowed turf itself (or at least the astro-turf beside the hallowed turf), a wave from Cotch as he completed a solo warm-up and free fan-tales in a tiny National Storage box.

I was nervous about this game, as we always seem to be when terms such as ‘season-defining’ are bandied around. Sometimes it feels as though importance looms over Richmond like a dark cloud. But I’ll get back to the clouds.

I chose to frantically write notes in a small notebook, because I tend to get very caught up in the excitement, and I thought I would forget everything. In the first quarter my notes were mostly: Clearances??!!?!

Not an ideal start by any means, inside 50s 7 to 19. But this quarter didn’t feel as bad as some of our other poor quarters this year. There were little things to take pride in, such as Kamdyn’s desperation, throwing himself at the ball and at Giants willy-nilly. Broady bouncing back up after being kicked in the ribs, moving onto the next contest with barely a wince. Strong marking efforts from Astbury and Vlastuin and tackling pressure from Rioli.

On Astbury (DAAS always), the forearm to the throat of Mathieson last week, followed by the collaring and stern words on Toby Greene this week were almost as impressive as his improved marking. Almost.

Final note for the quarter: I hate Toby Greene.

In our briefing with the coaches, a fan posed a question about Rioli’s output over the last few weeks. The response was that while Dan hasn’t had as much direct scoreboard impact in the second half of the season, his GPS stats had not declined at all, indicating that he is still moving, running and creating.

I don’t like to talk about Cyril when talking about Dan. I don’t think comparisons are fair or necessary, but I did have a little think about Cyril today. In the second quarter Dan Rioli was everywhere, and his possession count and goal tally won’t tell you that. His pressure, his tackling and his presence in marking contests were really important. The little things count.

At the top of the page I’ve written rain and circled it. It was only a drizzle, but it was a start.

We came out more attacking, our pressure lifted, our kicking became more direct. Lambert goaled after being denied a holding the ball call (so maybe he was in Mzungus’ back a little) and the crowd began to lift.

Dusty and Cotch too had lifted, our captain beginning to put his stamp on things with 6 tackles, and a crazy mid-air grab of a ball he had no right to get his hands on. Our Bull bringing the pressure, the breaking of tackles and a goal.

VLAS. Capital letters at the bottom of the page, as Nick puts his body on the line again and again, taking marks and stopping everything that comes near.

Desperation and a lift in physicality, our pressure returning to the high standards of earlier this year.

Wet weather has become something of a gift, it rewards brute strength, hard work and quick thinking.

We looked stronger, worked harder, thought quicker.
(That should probably be ‘more quickly’, but it ruins my motif) 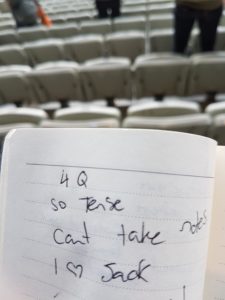 Notes for the last quarter were brief

Jack was well-held by Davis in the first half, and was pretty well-matched in the air. There is something about Jack and the rain, probably born from soggy Tasmanian mornings. He has always been an incredibly smart player, and when it rains he truly gets to showcase his genius. The swift taps, knock-ons and pokey soccer kicks to advantage – he gives everything he has, heart and soul and sweat and tears. I just love him.

Toby Nankervis is a very physical player. I may have described him as an animal at some point.

Soldo, on hands and knees, handballed to Prestia through a Giant’s legs. I just thought it was cool.

Short’s kick i50 to Riewoldt was a thing of beauty.

Nathan Broad is a tough cookie, I’m really liking him.

Upon rewatch, in the commentary: “Alex Rance, who will swallow anything that comes near him.” Thanks Huddo.

5 Dusty – That sharp in-take of breath that echoes around the MCG as he gets near the ball is exquisite. I got an absurd amount of joy from Tom Scully missing a shot on goal, and Dusty kicking one immediately after.

4 Cotch – Just keeps rolling along, doing Cotchy things. Stood up in the second quarter when we really needed a Firestarter. Gets down and dirty, tackles like a maniac, shows crazy cat-like reflexes and never gets a hair out of place.

3 Vlastuin – the great wall of Ranga. Marked everything, crashed packs and was seriously impenetrable. Has an excellent beard.

2 Jack – Worked tirelessly to get himself into the game, and impacted heavily where he could. His work at contests to get the ball to ground was noticeable, and his wet weather footy is impressive, and just plain fun to watch!

1 Kam Mcintosh – In the first quarter we looked sleepy/absent. Kam was noticeable because of his early efforts, his run at stages, and his work on Tom Scully. Loves the wet almost as much as Jack.

Special mentions to Brando for his run and carry, and Georgie who despite having some issues with goals in the last few weeks, laid 9 tackles, showing great desire to have an impact.