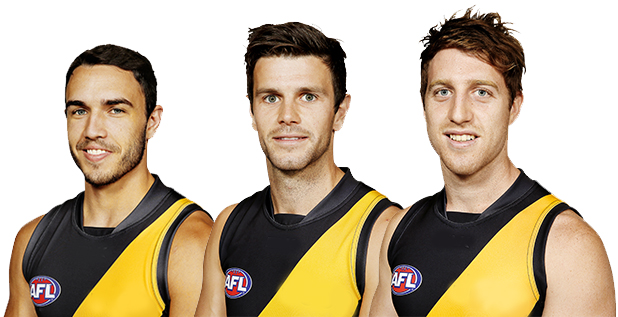 What do we all want from our footy club? First, sustained success. And nothing else is remotely close. It’s daylight second. We want the club to win flags. But at any cost?

A few years back Cronulla were scratching for a jumper sponsor. An online dating agency pounced, offering a lucrative sponsorship. Catch: they specialised in extra-marital affairs. Cronulla said no. Did they go on to win the premiership proudly sponsored by the RSPCA or a local orphanage? I don’t think so. But I think they made the right call.

When people are asked why they love Richmond, people frequently mention the jumper. It’s a beautiful thing. The club have a video of 100 years of the sash – and it’s really inspiring. All the guernseys look so clean on the old footage, pre-sponsorship. But as long ago as the 1980 premiership we had the first logo sneak on, Tetley. Here is Newy talking about how the players feel about the jumper.

I’d like to do a business case for returning to a clean Richmond guernsey. Nothing on the sash. No green Bingle on the back. Straight away of course the club loses income, but let’s have a look at it. (To be clear I have no financial qualifications or interest in club administration. I am strictly a kicks and marks and goals and tackles man.)

Looking at the RFC annual report, the club got $3.9m last year from sponsorship. That buys a lot of footies and tackle bags. If we assume 75% of that comes from jumper sponsorship, then clean jumpers are going to cost three million dollars.

RFC got $6.4m from memberships, and $750,000 from merchandise sales. Will more people buy a non-sponsored jumper? Will more people sign up to the club? Will people pay 10% more for their memberships to be part of a club that values members above sponsors?

Because that is what I am really on about. I would want this move to be a symbol of a new Richmond that values its members and listens to what they have to say. That tries to embody what made the club great in earlier times. That is strong and bold and prepared to be different. Going back to my opening question of what members want, I suggest after success they want access and influence. We want to be able to communicate with the players without being treated like stalkers. We want a channel of feedback and response so we know the club has heard what we have to say.

The clean jumper is a maverick move, no doubt about it. No professional sports team that I can find in the world has ever turned it’s back on sponsorship on the uniform. Once advertising arrives it stays. (There are some examples of Championship clubs in the FA donating the space to charities for a season or a few games.) Of course there is more involved than the jumpers, apparently the boys all ‘drive home proud’ in their Bingle-insured Jeeps after games such as the 50 point loss to Essendon. So they’d probably have to take the train a la Riewoldt or maybe buy their own cars.

But think of the attention it would gain for the club! Think of the ‘First Adopter’ advantage. I can imagine fans of other clubs saying “I wish we had been the ones with the guts to do that”. The club is in a strong financial position right now but it’s culture is muddled and there feels like a disconnect between the club and the fans. On field we seem to be stuck in a 10 year loop of minor success, major face-plant. Strong and bold leadership is required. What have we got to lose at the moment?

Sometimes the one thing that grabs your attention in amongst all the noise is a bit of silence. Football has never been visually noisier – it’s a logo nightmare as this fantastic piece of work by John at Holy Boot’s Emporium shows.

Imagine if Richmond had something no-one else in footy could match – that is actually something that would attract sponsors. But they would be sponsors who understand there is more than one way to engage with a footy club, and to have a mutually beneficial partnership.

What if RFC could embrace the community and put the fans at the centre of the club for one year. They might find they don’t need to spend $2,867,546 on marketing and promotional activities like they did in the last financial year.

One year with no jumper sponsor, with slightly higher memberships. A player in that guernsey is representing Richmond and nothing else, not a car or a bank. After one year the CEO and the COO and the CFO etc can sit down and decide on a proper financial basis whether to continue. What do you think?