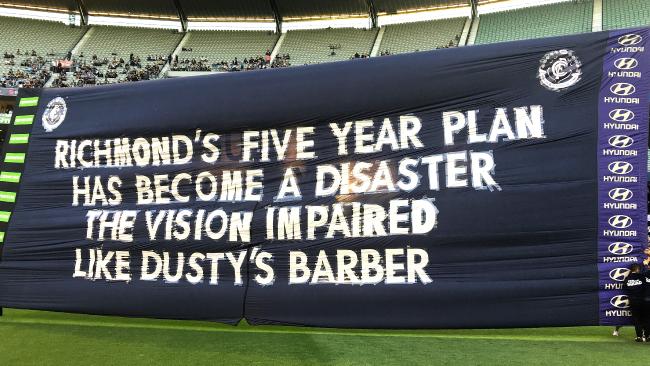 Wrangling children, I arrived at the game minutes before the bounce, as the run-through banners were shouldered away, torn crepe paper carted back into the bowels of the MCG. Dennis Armfield kicked a clever, tumbling goal for them, nice roving off the pack, and their supporters found voice, and Mrs TTBB – at the ground early to reserve our seats, watching the early autumn light lower, the stadium fill, both banners raised – commented in protest: “what about his haircut?”.

It was a reference lost on me, until after the game.

I know what Carlton were trying to do.

They’ve seen the rising popularity of the Western Bulldogs’ banners, the handiwork of stand-up comedian Danny McGinlay, who with rhyming couplets and a chisel-sharp wit has reimagined what a run-through banner can do, and say. From a cult following on social media, his bon mots have gone prime-time, on TV and radio, giving him spin-off jobs, and serendipitously following the soaring fortunes of his football team, and club.

For all the old hard-luck Footscray supporters, their banners now rise, and everybody talks about them, and their chests puff in pride (or sometimes bewilderment), because their funny man does what Teddy Whitten once exhorted, he stuck it right up ’em!

And the best bit is, his club have backed him. They’re unafraid to take risks, to flirt with the risqué, knowing with his comedian’s knack for timing they can poke fun at just about anyone.

The Bulldogs play Sydney at the SCG, and he touches the raw nerve of lock-out laws:

WE’LL WIN THIS GAME
AND PARTY TILL LATE
OR AT LEAST TILL ALL
YOUR PUBS CLOSE AT 8.

They play in Perth and his quip is about the end of the mining boom, or the price of coffee in the west. And for a cut-throat finals game at Homebush against the GWS Giants, one of the league’s corporate start-ups, he pairs BLOOD AND BOOTS with AFL FOCUS GROUPS.

My favourite is when the Doggies played Melbourne, a club long-pilloried for its supporters with their trust funds and old school ties, with housing affordability the week’s hot-topic issue, and his response:

A few years back I looked up Danny McGinlay, met him in a café in Swan Street, in Tigertown, and he said the trick is to play the room.

“The joke is for the crowd, for the tens of thousands in the stalls, not the twenty-two players.”

But there’s another thing he didn’t say.

He doesn’t play the man. 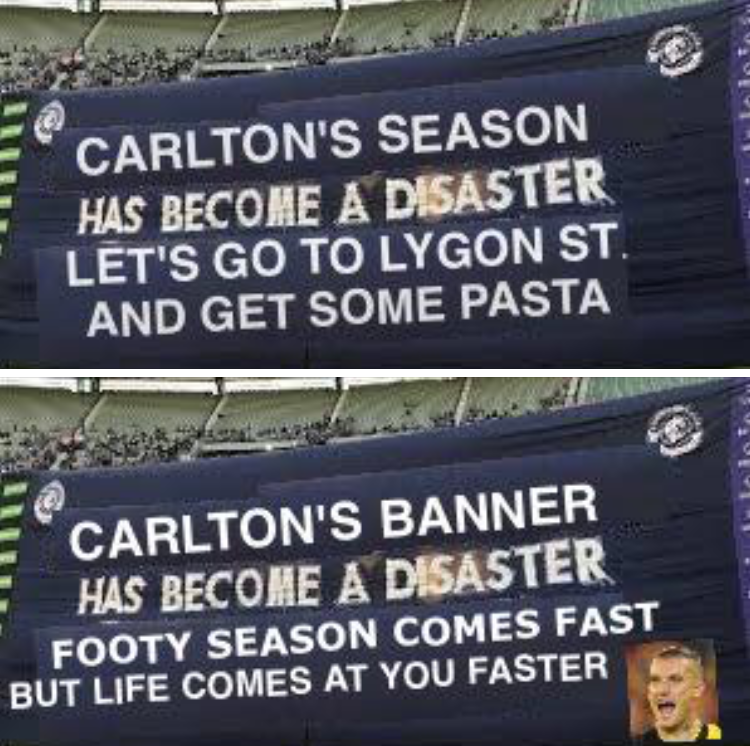 Josh Pinn came up with these alternative banners. Much better and more accurate.

Much about Carlton’s banner on Thursday night was wrong. The typesetting, for one. It was all over the place, too cramped. And it didn’t rhyme. And mentioning the ‘vision impaired’, a bit awkward. But mostly because it singled out a player from an opposing team for his appearance. It’s a slippery slope, especially when that player has Maori heritage, and much of his culture may be conveyed in visual gestures, as with his tattoos, the haka war cry and dance, and yes, maybe even the way he opts to wear his hair.

Carlton is a club, because of its demography, with a large Jewish supporter base. Would they be comfortable if their run-through banner made a joke of a payot, the Hebrew sidelock?

I don’t care much for those who are cavalier with language, with words, hiding behind the catch-all excuse of ‘political correctness’. They’re usually dullards, white men, middle aged, those who control the pervading culture (politicians, lawyers, the monied) without even knowing it. And none of them can kick a ball like Dusty.

The Carlton banner didn’t work. It wasn’t in the spirit of the game, or the night. It was too pointed, too mean. Ugly. And stones in glass houses? You don’t wag the finger at an opponent’s hairstyle when you’ve got manbuns running around, and whatever Dennis Armfield likes to call his get-up.

He turns me on. He makes my heart skip. He makes me want to hug him, cast a protective wing over him.

These footballers, they do something to us. They wear the colours of our team and show courage and honour and we want only the best for them, in football and in life. They take us elsewhere. The narrow, upset win that’s better than sex, a premiership that might be better than anything in our mortal lives.

I’ve stood in the outer at the game, shoulder-to-shoulder with the raw cacophony of the ‘Grog Squad’ behind the goals at the Punt Road end of the MCG, and when they sing about Dusty they sing louder than they do for any other player. It’s primal. He is their spiritual totem, their pagan god. He is the one they worship the most.

I’ve sat at the game and seen middle-aged and middle-class woman swoon for Dusty, rise from their seats, raise their arms for him, reaching for the sky. He stirs something within.

We love Jack and Cotch and Alex, and Dan Rioli is fast becoming a new favourite, and this new ruckman of ours – what a sterling lad, big and strong and honest – but it’s Dusty who’s our saviour, our heartbeat. When he gets the ball, and opens his chest and runs forward, we surge with him, alive to all the possibilities he creates.

Did you hear the crowd roar in the third quarter when he offered our season his first fend-off?

He is our man. You cannot touch him. He carries our hopes and attachments on his shoulders. He instils confidence. He can do things most footballers only dream of. He is unbreakable.

He is our tribal warrior. 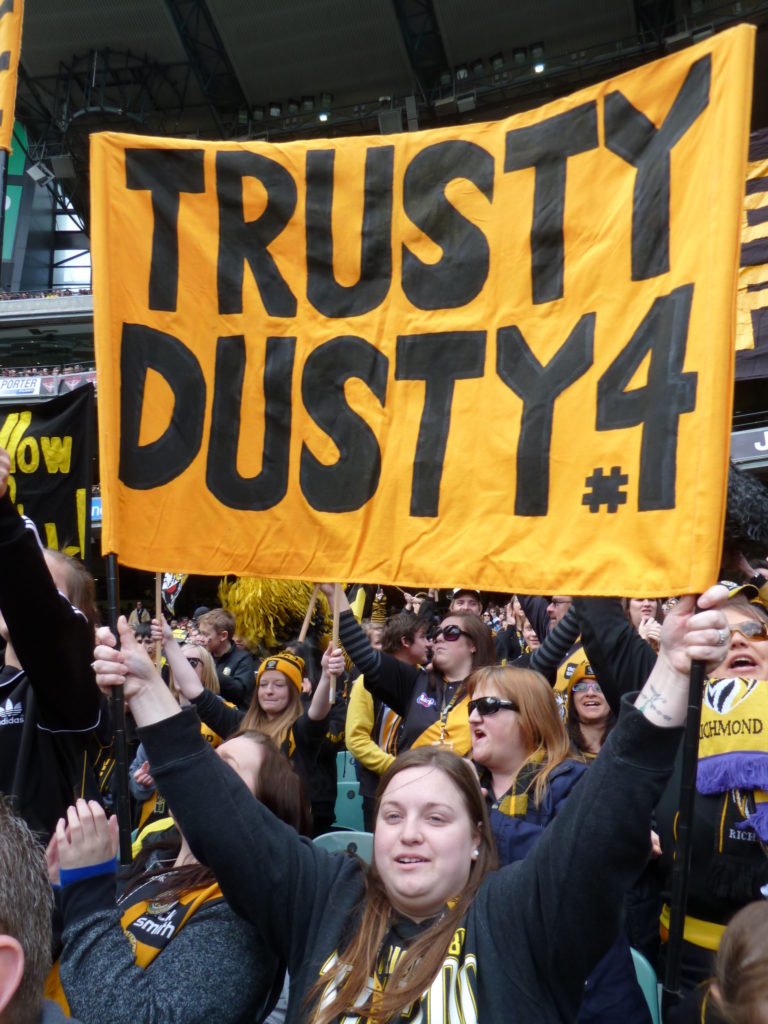 Rightly or wrongly, each football club in the AFL is of its place. In history, there is belonging.

Richmond, as with Collingwood, have always been clubs from the lowlands, a workingman’s haunt, with the stains and smells of tanneries and breweries, and tomato sauce making, and burning malt. Poverty and prejudice welded its people into a richly human community, its social fate determined by its topography.

And the character of a suburb has come to embody the spirit of a football club, an essentially community organisation that we identify with.

We are not Carlton, the blue-bloods from higher ground, bankrolled with all their money.

We are Richmond, the hard-knuckle boys from old Struggletown, playing as if our very lives might depend on it.

And in Dusty we have our romantic hero. Our beloved outlaw, our hunter, our lone wolf, our rock and anchor, our boy-man who takes us to higher places, who has us believe.

And we are beguiled by him, by his actions, by how he looks, who he is, by his social awkwardness, his fragility. Rarely have we known a footballer who looks so poised and natural on the football field, look so uncomfortable and displaced when put on life’s other stages.

For two hours each week, you are our footballer, and you are everything.

And those who judge you on your appearances ought to know this. I’ve always known you as a selfless footballer, looking for a teammate in a better position, and so often winning the ball for others.

And you’ve always been an unscrupulously fair footballer. I’ve never seen you throw a punch, or do something unfair or malicious. I can name so many champions who I couldn’t say that about. Chris Judd, two Brownlow medals. But us fans don’t forget the chicken wing holds, the pressure points, the competitive meanness.

They can’t say that about you Dusty.

You just slay all before you with all your gifts.