A small pre-cursor.
I was invited to the wedding ceremony of my best friend from primary school, just a few days before this match.
I was behaving myself in the gorgeous church, my phone buried deep in my pockets.

Two blokes in front look at a phone and giggle, but I don’t look.

My fitbit vibrates, excited to share with me its new feature – displaying my texts.

So far so good?

Towards the end of the ceremony I catch a glimpse of the phone held by the guy in front, the score reads 58 – 4.

So I watch the replay. 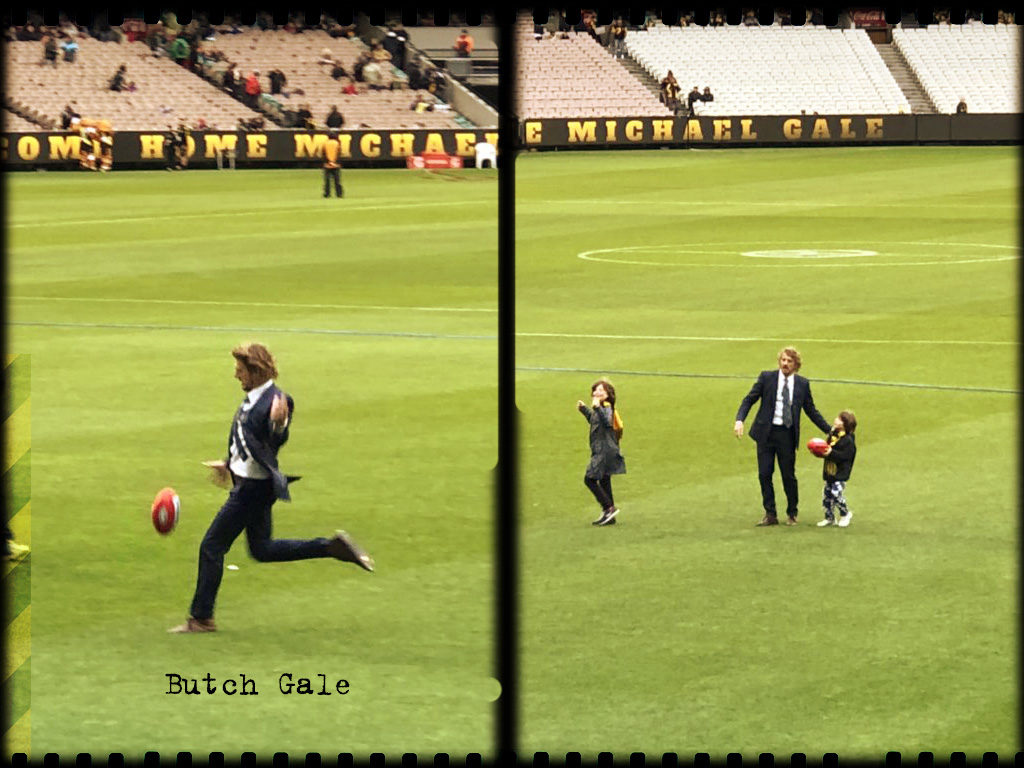 A strange start – Charlie Cameron kicks a goal, the umpire calls it a goal, the review says it’s not a goal. From my couch it sure looked a goal.  Then we get a free and Dusty kicks a point, gets called back to his mark and kicks a goal.  We may be in a universe in which this game both does and does not exist.  Eric Hipwood is high up the ground, still looking like a young Rafa Nadal. I think his hairline is just as doomed as poor Rafa’s too.
This is a missed opportunity for us to be playing baby Nick Kyrgios (Shai Bolton)  Oh look it’s Premiership hero Jack Graham with a nice shepherd, collect and inside 50.  JACK. (we have multiple Jacks now, but there is only one ALL-CAPS JACK)
A Huge pack mark in the goal square and HE goals. Some pretty poor defending by the lion cubs there, and that’s going to become a running theme.  Heh. Cotch in the ruck.  Caddy marks and goals, and gets a clearance at the next bounce, because stuff going to the bench for a rest. This year FoxFooty has little player poses after certain players kick a goal, and in his, Caddy appears to be applauding himself.  Zorko gets penalised for picking up the ball as Ellis lays a messy tackle. Mmm. Questionable free kicks. Delicious.
Ellis works hard to get forward and ends up on the end of it, but the kick isn’t his best.
No double cobra for that one, and we are all poorer for it 😔  Dwayne Russell inexplicably calls George Castagna ‘Cutler’ and despite (or perhaps in spite of?) this disrespect, George slots it on the quarter time siren.   Q2  Oh hey it’s the 2nd quarter and we open it with forward line pressure and a goal to George.  I don’t remember what the Brisbane forward line looks like.  Jack with another set shot and another miss, and even though this is delayed, I swear I can hear my Nan groan affectionately.  Oh hey Brisbane forward line. Hi and goodbye Josh Walker’s hairline.  We are seven minutes into the 2nd quarter and the score is 42 to 3. This is not a great day for the Lions’ pride.

Heh. See what I did there?  Towner and Nick Robertson are wrestling and I agree with the commentators, I would pay to see that.  We are dominant, and it’s looking a bit like a training run, Towner goals after Dusty flexes some muscle.  Nick Dal Santo full of praise for Rafa Hipwood, who is working very hard trying to help out the back line, then getting forward when they actually get the ball.  Ellis, possibly discouraged by his previous set shot, plays on from a mark and gets all in a tangle. Castagna moves give support but misses. We are 1000 points up and yet I’m almost annoyed we’re not winning by more?  Nick Robertson is the Lions best player so far. Funny what happens when you focus a bit more on the ball and less on kneeing Cotch and Dusty in the backside 🤔  Oooh, Bachar has a run and bounce, and George gets a very, very kind free kick. A Brisbane player spoils. Defending!

Nick Dal Santo is interviewing Jack who is halfway through a banana and just wants to sit down. He’s still sharp and funny, because he’s a good lad.  Our players have been a bit more visible, are we giving the media a bit more access? 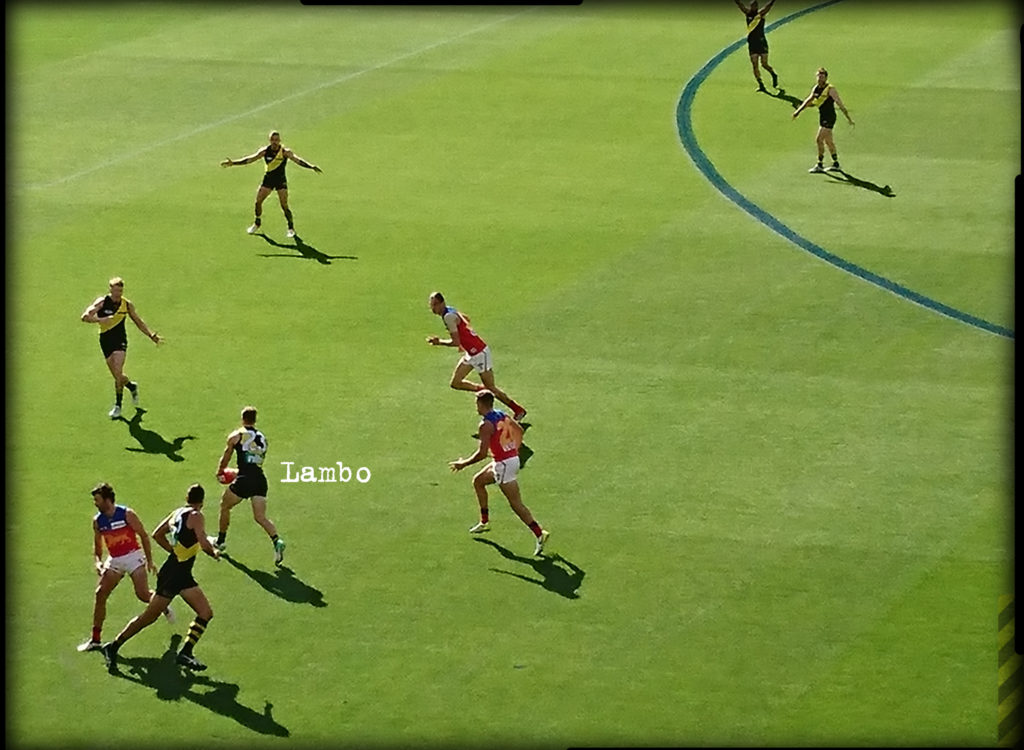 Kane Lambert has no shortage of options. Photo by Jason Dowling.

At this point I was driving home from the wedding and flicking between 3aw and MMM. MMM would spend the next 20 mins trying to find out the last (only?) time a team was goalless at 3/4 time and mocking their stats guy when he couldn’t find it immediately. Champagne radio.

A few minutes into the 3rd and George has another goal, and a few uninspiring minutes later Dusty has his fourth. If someone takes a chest mark at the back of a pack, you’re having a bad day.   But truly, the third quarter belongs to DYLAN GRIMES.

This is a fumbling training run of a quarter, and the highlight is definitely our defensive efforts.
3/4 time is closing in, and suddenly it becomes imperative that we deny Brisbane a goal. We’re mad, all of a sudden, and it’s as though a Lion’s goal would undo everything we’ve worked for. Enter Grimey, in all his glory.

Desperation, say the commentators, as Grimes leaps for the spoil in the goal-square , bounces up from the ground and lays a brilliant tackle on the other Martin, who was absolutely just centimetres from getting a goal.

But the tiger faithful know this man, they’ve been heart in mouth for years as he defies belief time and time again with his ruthless attack on the football.  Desperation is all Dylan Grimes has ever known.

All you need to know about the 4th quarter is that Dusty kicks goals five and six for the day, the poor lion cubs are witches’ hats and we win by 93 points. It is a comprehensive victory, with Brisbane only allowed to kick two goals. We are so lucky to see this group of defenders do their thing each week.

It all reminds me a bit of losing to Geelong by 157 points.

It’s nice to be on the other side. 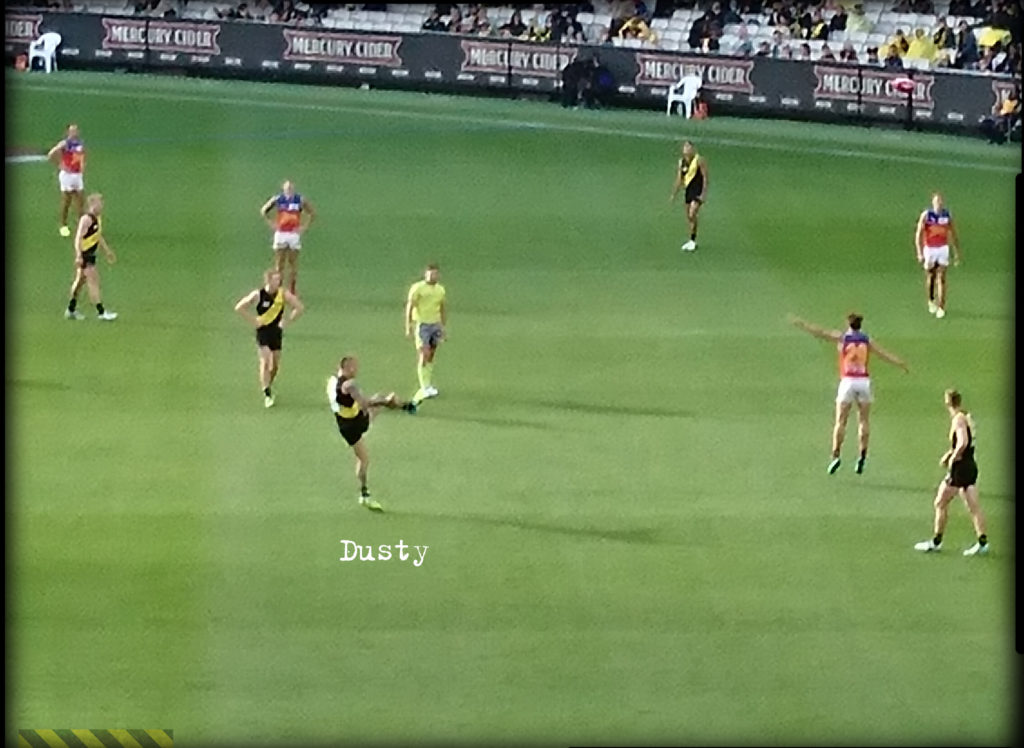 Dusty piles on the pain for the hapless Lions. Photo by Jason Dowling.

VOTES
5 Trent Cotchin. Our fearless leader is killing it at the moment.
4 Dustin Martin. Jet.
3 Kane Lambert. Putting it all back together after a slowish start.
2 Dave Astbury. Just so happy to see him out there, doing the work and doing it well. #DAAS
1 Jason Castagna. I googled him the other week, but typed George Castagna. True story.