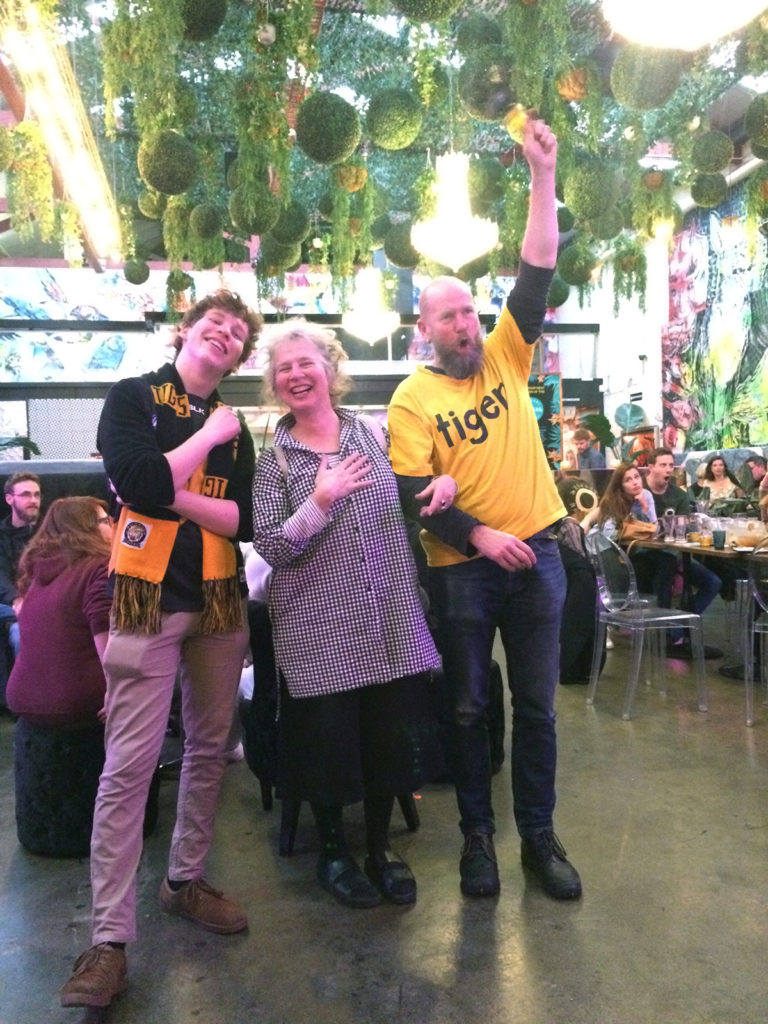 My high-school football coach was one of those blokes who could instantaneously transform from mild-mannered geography teacher to manic, hot-gospel zealot. Foaming at the mouth, he’d shower us callow sportsmen with a fine litany of motivational clichés. Two of my favourites were “A champion team will always beat a team of champions” and “It’s not the size of the dog in the fight, it’s the size of the fight in the dog”. (Come to think of it, this latter exhortation isn’t too far removed from Tommy Hafey’s famous line about the ‘tigerishness of a wounded bloody tiger’.) Now, decades down the track, I’m reminded of these fine motivational mantra because both of ‘em applied to the Tigers’ inspired performances throughout the recent finals series.

A month after the big event, we’re still pinching ourselves. Richmond Tigers are reigning premiers. How the f#@% did that really happen?

I watched the Grand Final at a beer hall with a big screen, just round the corner from my place in Fitzroy. There was the odd table of Crow supporters. My table accommodated the noisiest bunch of Tiger fans in the joint. The projected TV image was in the wrong aspect ratio, so the players looked a bit squatter than they should have. But we were nervous and excited so we didn’t really care. Some of the more impartial characters in my grand final coterie opined that the game was no great spectacle, but of course we Tiger fans disagreed. As the game went on we became overcome with excitement and joy. The odd involuntary tear was shed. And the Crowbots turned out to be a mob of chocolate teapots, dropping their collective bundle with surprising alacrity.

Like many Tiger fans long starved of on-field glory, I’ve spent an inordinate amount of time over recent weeks reliving those glorious three games our team reeled off at the business end of the season. These three football matches inspire awe and wonder, most particularly because our team played with such impressive self-belief and never looked like losing, even in those inevitable periods when the run of play was going against us. For a club with such a well-deserved reputation for choking and capitulating in big moments, this indefatigable spirit seemed truly amazing. Who were these manic men in the yellow and black? Let me sing the praises of them all because they were simply magnificent, and then let me extol a few in particular.

Our September team was unchanging and rock-solid. Everyone seemed to play out of their skin. Everyone played for their teammates. No-one shirked a bump, a tackle, a smother or a knock-on. Everyone seemed to run like a maniac from opening bounce to final siren. There were never any passengers and, to my eye, the difference between our acknowledged stars and our so-called second-tier players was largely negligible.

Jacob Townsend exhibited an incredible knack for bobbing up in the right place at the right time, always calm and collected, whether slotting a goal or driving an opponent into the turf.

Trent Cotchin transformed himself from silky virtuoso to bloody-minded maniac, throwing himself head-first into countless contests that he simply refused to lose. For a guy whose hair never seems to move, our Trent brings time-warp closing speed and mad-dog endeavour to his game. (And then, talking to the TV reporters afterwards, he can calmly put forward a string of almost proper sentences!)

Jack Riewoldt was a phenomenal on-field leader, seemingly filling the role of at least two key forwards for most of the season and especially throughout the finals run. He kicked only four goals across those September games, but he set up many more for other players and exerted enormous influence in each game. Like Cotchin, he’s learned how to focus his immense passion as a productive force, always inspiring his teammates.

I worried, last year, that Shane Edwards (one of my personal favourites) had somehow lost the magic spark, that ability he has to extract the football with freakish speed and make something from nothing. So it’s been heart-warming to see him back at his best, performing subtle miracles fast enough to be frequently missed by TV commentators blinking at the wrong time. For a bloke with sleepy eyes, it’s incredible how he seems to have a spare set in the back of his head.

‘The Human Meatball’ seems an unfortunate nickname, but Dion Prestia does exhibit an impressive ability to just keep on rolling, often taking the ball with him. He’s a perpetual motion machine, and his occasional lack of polish is more than offset by his relentless ability to win the ball and keep it moving in a Tigerly direction.

I’ve noted many commentators opining that our team has been incredibly lucky to avoid injuries in season 2017. There’s some truth in this, but also some significant counter evidence: Ben Griffiths effectively going down for the rest of the season in round 2, Reece Conca ditto at some early stage of the year, Shane Edwards missing a run of games, Riewoldt out for a couple with a freak eye injury. Bachar and Nank both missed games through suspension. Nick Vlaustin missed nine weeks with a broken shoulder, but his courage, skill and creativity was phenomenal once he got back on the park. He played a critical role in our defence and was superb in all the September games.

There are so many other players whose praises I might sing, including those we’ve heard much about already in every other forum (Dusty, Alex, Bachar, the so-called ‘mosquito fleet’) and those less copiously eulogised (Lambert, Astbury, Grigg, etc, etc.) but, as I say, the point is that every member of our team was truly magnificent. ‘A champion team…’, as my old footy coach would say.