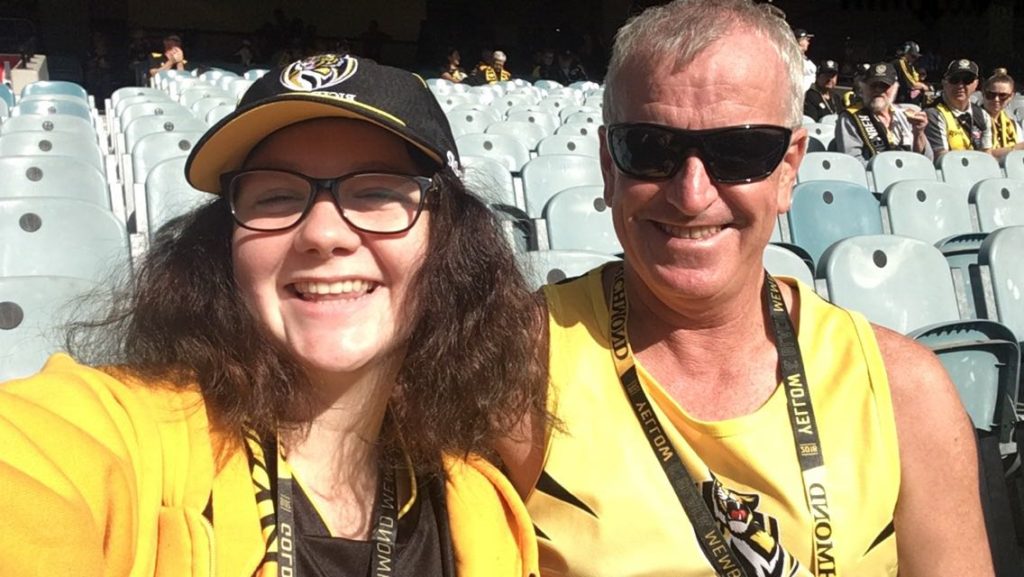 The author and youngest daughter Emily

I was making a planned journey home to see my mum and was reading TTBB during the trip. I sent Chris and Dugald an email asking did they need anyone to do the Benny this week as I’d be at the game and would be happy to do it. Chris said yep why not, Dugald reminded him of the roster; the game and the Benny was booked back in March by Malcolm. Chris said no worries, just pen a side story if you want to, and we might give it a run.

My first effort got a run a couple of years back. It was about 4 generations of my family not liking Collingwood. Let’s see how we go here.

My journey home to see mum starts on the south coast of Kenya on Wednesday before the Freo game. I’d emailed Dugald, Skippy Girl and Chris saying I’ll be home for a bit hopefully we can catch up.

First stop Nairobi and a trip to ICU at Aga Khan Hospital. A good friend of my family had been involved in a horrific car accident. Jane is pretty banged up but she’s as tough as a Tommy Hafey era Tiger and is slowly healing. She is surrounded by her own family and other friends and on my way back she’s getting another visit; and a Tiger scarf, she’s earned it.

Nairobi to Doha, onto Melbourne and finally after the train ride I arrived in Sale. I had a day to work out how to get from Sale to the MCG and home again; my plan found me back on the same train Sunday morning at 08.30. It was then it hit me. This game, this round last year was to be my dad’s last game as a spectator at the MCG. I remembered the game, I remembered him raising his ailing body out of the seat when we hit the front and I remember Mundy’s goal shortly afterwards.

Freo 2017 post game dad walked up the stairs from M-15 with his oxygen in tow and a mate from my primary school days, Duggo. Before reaching the top of the steps he turned to look at the ground and when Duggo asked if he was OK he said I’m just having one last look, I won’t see this again. Dad died about six weeks later.

The other thing I remember from that day is our eldest daughter, my best mates son and another Tiger we sit with; Olly, his eldest daughter. These kids had grown up at the footy with us, they used to have jam donuts and juice and they’d yell and scream at the Tigers of old. What I remembered though from last year was these three “kids” were adults and were sitting in the sun with us enjoying a beer and watching our Tigers. Our ambush had been solid for almost 20 years. Bear, Duggo, Olly, George, Spiro, a bunch of kids and my dad. Throw in the occasional visit from our wives and that’s our ambush. (An ambush is a family or group of Tigers……true story). 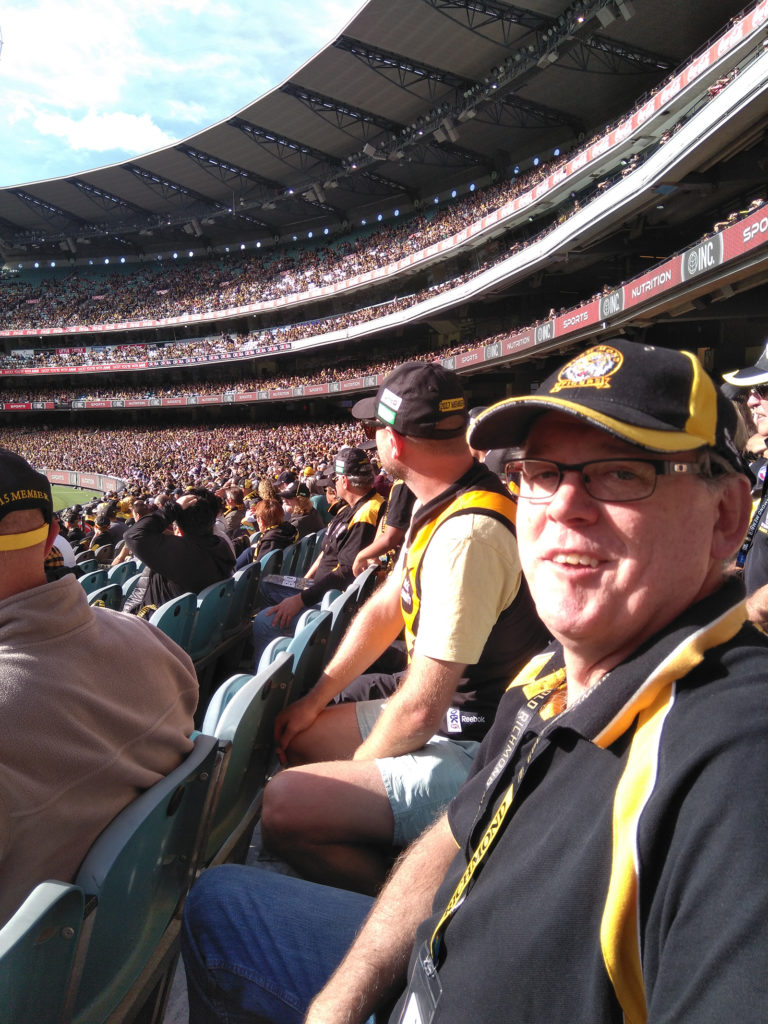 Duggo, a mate from Primary school days. Duggo, Bear and I have been going to the footy to watch the Tigers since the 70’s. (unfortunately Bear couldn’t make Sundays game) 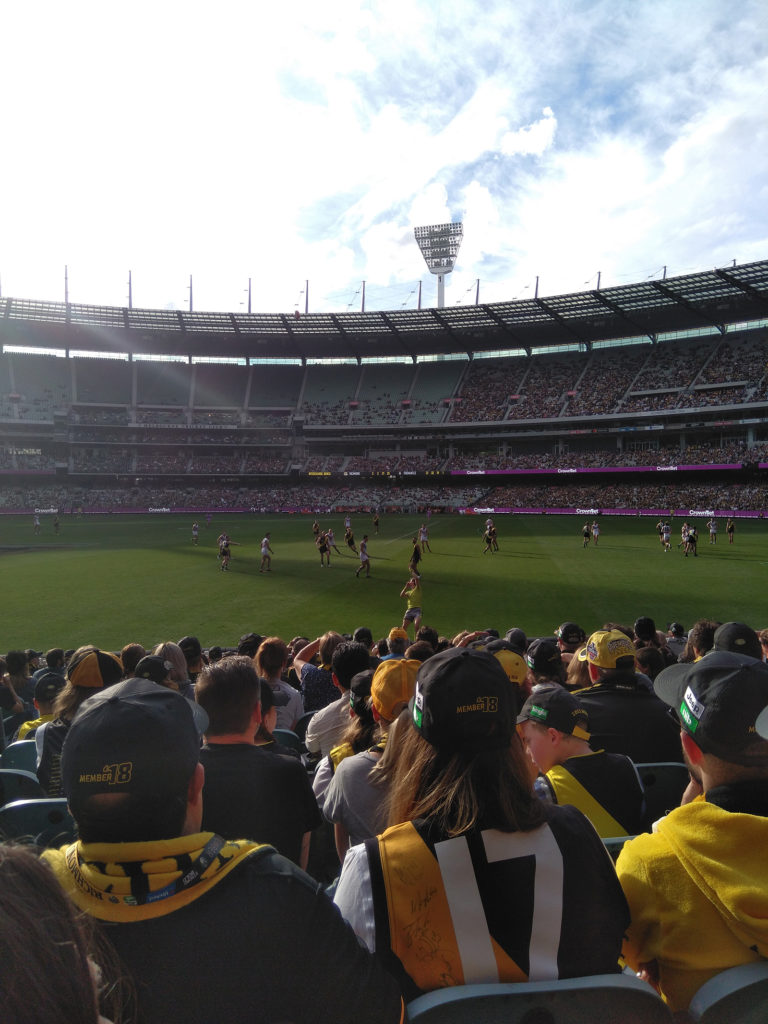 Some of the “ambushes” around M-15 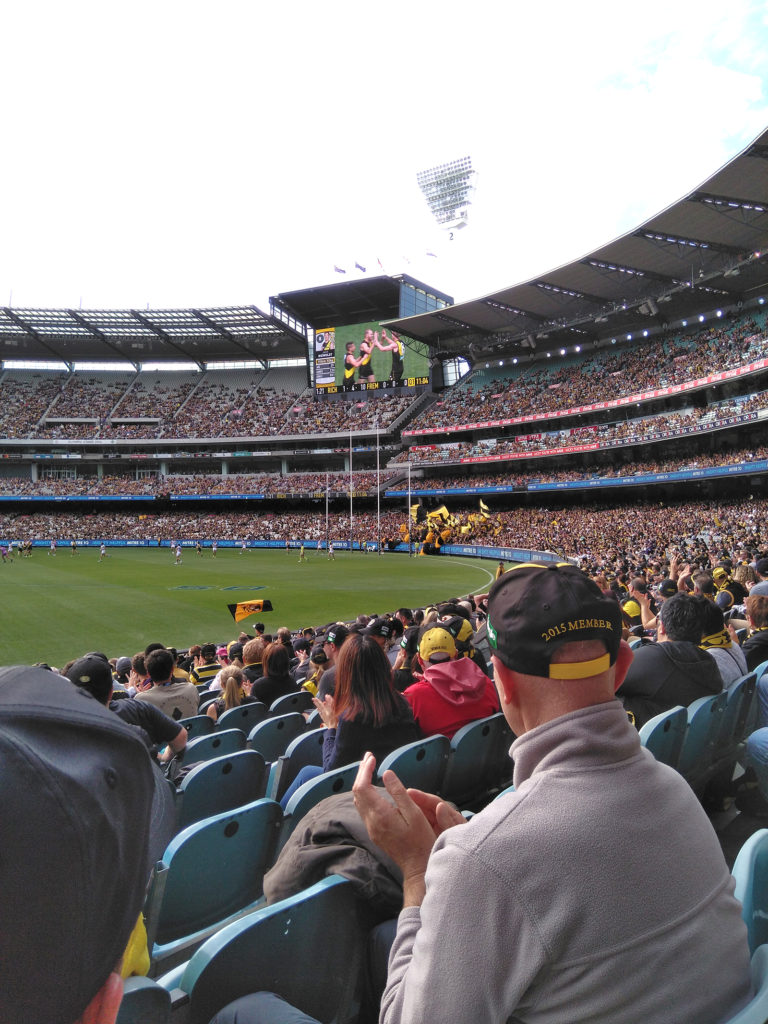 Olly, clapping Jacks first for the day. Olly has been in our “ambush” for 20+ years.

I went to the footy the following week feeling empty, my daughters were beside me and it dawned on me then that the yellow and black baton had passed down to another generation thanks to Dad. We were lucky enough to score 2017 grand final tickets as did Bear and his son and our mate Duggo. Freo 2018 was my first game since that memorable day.

Olly turned up and the first thing he said was sorry about your dad Tommo (he hadn’t seen me since Freo last year). We then talked all things 2018. George turned up, Duggo, Bears brother in law Jamie, my youngest, Olly’s eldest….our ambush was almost full. For 20+ years, week in, week out all or part of our Tiger ambush get together to share the Tiger experience.

I started to look around and look at all the Tiger ambushes just in our section of the MCG. People hugging, shaking hands, patting backs. Tigers proud, laughing, confident and basking in 2017 and 2018 thus far. Freo had beaten us the last three games at the G. Not today, no chance, won’t happen. Cotchin’s out, doesn’t matter – our two’s could beat them. The Tigers are back in town.

I haven’t seen that in Tigers for a while. I was loving it, basking in it, I am part of it. I get weekly photos and short video grabs of the game, the song and various player snaps from my daughters and a couple of others including Skippy Girl. Bear and I share phone calls and talk all things Richmond. I chat on email with Chris and Dugald, read the various websites, blogs and I stream the games and watch the replays back in Kenya but nothing, absolutely nothing beats sitting in the sun with our ambush when the Tigers are up and about.

Another 8 goal last quarter and cue the song. This time every Tiger ambush, every lone Tiger, every Tiger cub was one strong and bold Tiger Army. We sang loud, we sang proud, we roared Yellow and Black.

I took the train to Caulfield and kept the Richmond patrons amused with songs from my days in the cheer squad. My youngest wasn’t overly impressed but she did laugh at my antics. We then caught up with her sister (our eldest) and we had a meal together.

My eldest drove me back to Sale, it wasn’t the same as going home with dad and dissecting the game but we were two Tigers going home after a win. We had the scarf flying out the window all the way home, that’s something we always did with dad. Life goes on but some things in life never change, like scarves out the window after a win.