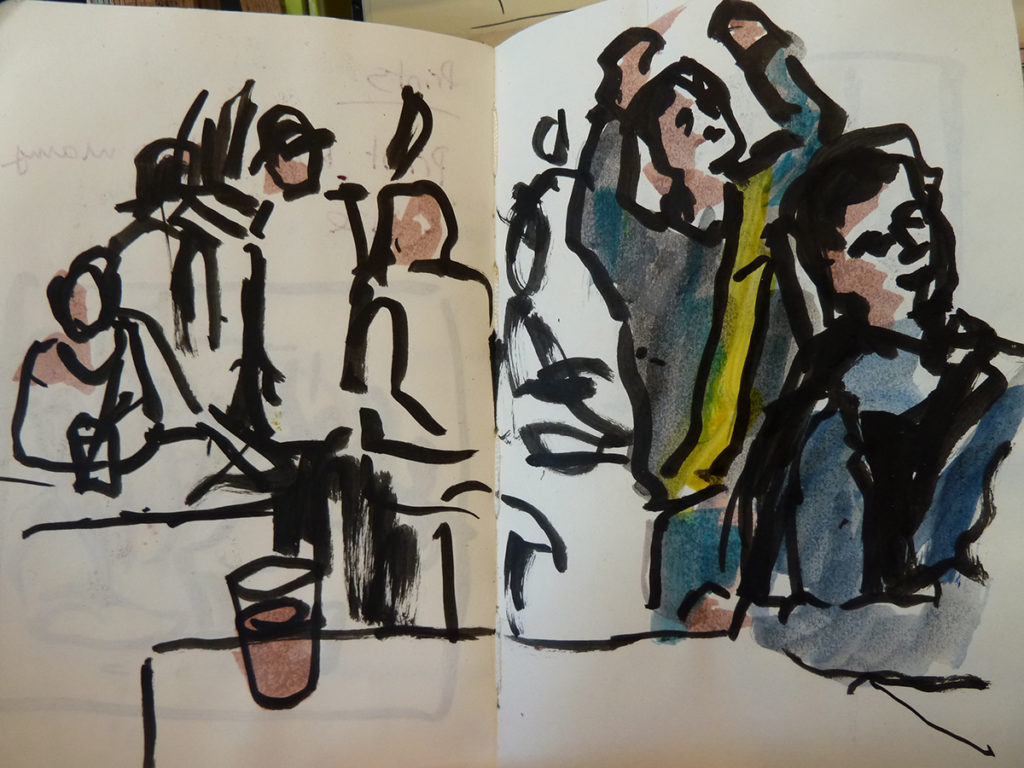 Oh, the joy: the pub, Richmond win, public euphoria (a sketch by Kate Birrell whose artwork and poetry this week can be found elsewhere on TTBB)

Only Richmond, with a score line like that, when none expected it. I didn’t know the drama of the result, the most sensational win for Richmond in living memory.

Here was a night when the story of Richmond – improbable, contradictory, romantic, quixotic – burned brighter than ever. Well after the result, my phone was lit up like a Christmas tree with text messages. Something remarkable had happened. A story had been made.

And I didn’t even know the half of it.

Monday night, and a friend who barracks for the Tigers said how at half-time on Saturday night he went to a pub in Hawthorn to meet friends and watch the second half with others, the TV volume muted, and how a crowd gathered at the bar late in the last quarter, drawn to the game, to the dying minutes, and how the room was breathless as Sam Lloyd kicked for goal, and then erupted as one.

All recognised the miracle. The “bounce of god”. Fortune, it favours the brave.

And then a mixed crowd in a pub in Hawthorn on a Saturday night broke out in song: ‘Oh, we’re from Tigerland’.

Richmond, it defies logic, it’s an emotion that crosses football’s streams, that one day might even make a city whole.

A longstanding friend is having a second child. He’s a Hawks man. Passionate. Never misses a game. I texted him before the Hawthorn game last Friday week, wanting to catch up, but he couldn’t go. He asked instead if we could join them for dinner the following Saturday night. It seemed hardly a dilemma: Richmond v Sydney, or a restaurant meal with dear friends, without the children?

But it wasn’t just the football.

All season I’ve been telling a Swans-supporting friend, a man who knows more about football and footballers (and literature and many other things) than I ever could, that we’d go to the game together. I’ve a soft spot for the Swans. I’ve lived in Sydney for most of my adult life. I like the vibrancy of their colours, their cheerfulness. And South Melbourne’s legacy as a workingman’s club, on the lowlands, is much like Richmond’s.

Saturday night and we put Mr 2yo to bed and left Mr 6yo on the couch watching the game with his aunt, my eldest sister (a mad North Melbourne fan, happy and wearing her colours from her day’s outing), with instructions he go to bed at half-time.

Driving to the restaurant, crossing the Yarra on Punt Road, the lights of the MCG ablaze in the sky, I say to my partner how I hoped Richmond wins if only for the sake of our eldest boy. He loves the football, the idea of Richmond. He’d been wearing his colours all day from AusKick.

He picked Richmond in his tips; he almost always does.

He plays imaginary football around the house and in his narration there’s always Jack and Dusty and Deledio and Alex Rance and Trent. He needed a win more than anyone I know.

Whoops of joy at the restaurant table. For much of night I had asked our companions about their young daughter, their work life. It’s not often you sit at a table with a gastroenterologist and radiologist, and hear stories of their research – both incredibly modest – and how they make a difference in people’s lives. It’s inspiring. I’m happy for them of the life they’re creating together. These two, they are beautiful. If they were Tigers, it would be perfect.

After the win, I tell a story.

It’s about a young man, Sam Westergreen, from Launceston, and his baby daughter. We corresponded a few months ago, and I had arranged to visit him on my way to Hobart – with our two boys and my eldest sister – to see Richmond’s Round 11 match against North Melbourne. Sam had sent photographs of his little girl, born 13 weeks premature, as small as a sparrow, and her whole life so far spent in hospital. 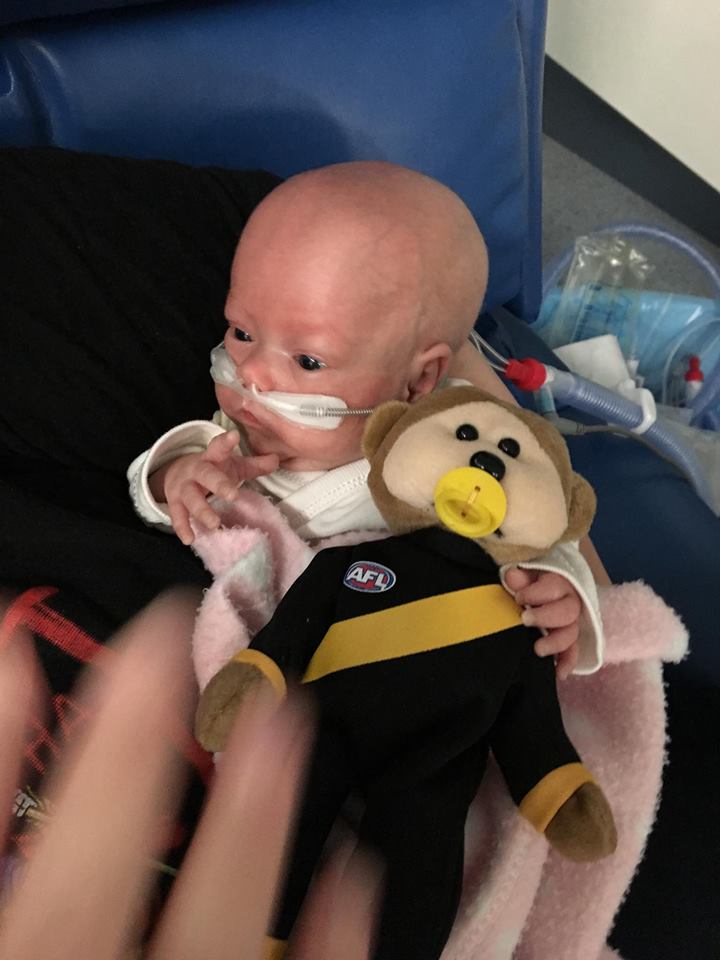 A little Tiger: baby Jazmin, weighing 360 grams at birth, born on 2 January, yet to leave hospital, still fighting hard for her life.

In Melbourne with his partner and their daughter, who last Thursday underwent surgery at the Royal Children’s Hospital, Sam called again last week and we spoke about the perfect distraction of football, the escape, and how his team – our team – despite all the losses, had given him succour.

Richmond won a game on Saturday night and I thought of Sam and his partner Sharni, and their daughter Jazmin, and what the win might mean for them. I texted Sam on Sunday morning, said I was thinking of him. He replied: I decided we needed a treat so I got two tickets to last night’s game. It was my first game at the G. It was a real treat for us to be able to forget all the stress and worry and just have some fun. GO TIGES! 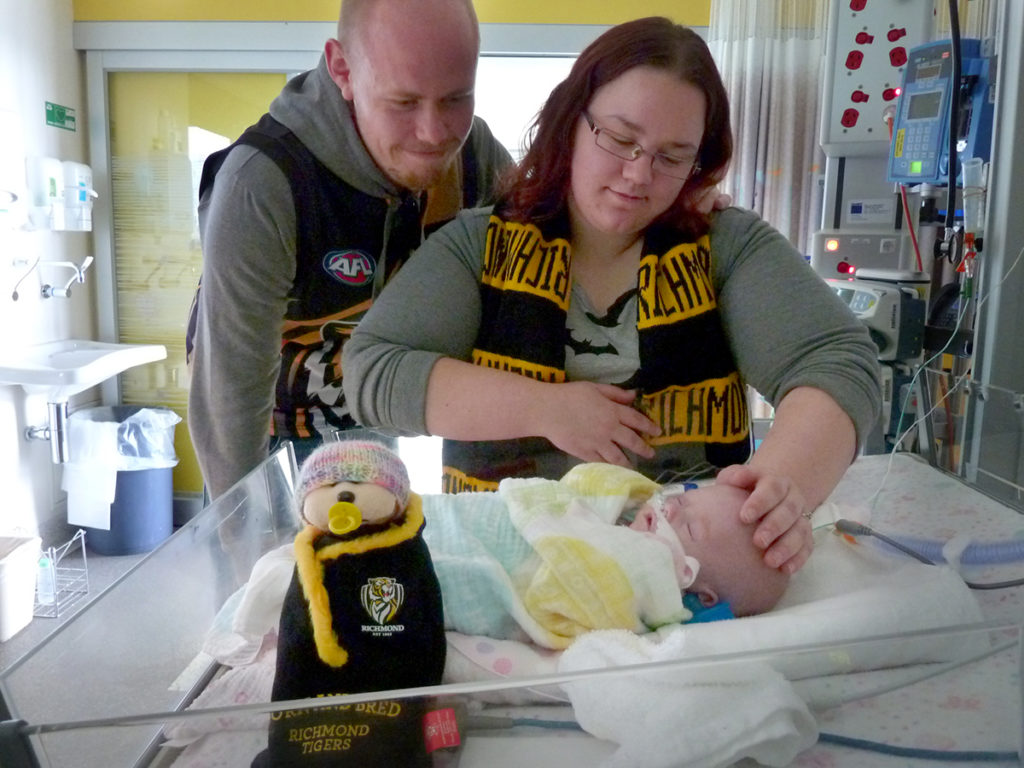 Tassie Tigers: Sam and Sharni and little Jazmin, in hospital in Melbourne on Tuesday. They’re hoping to return to the Royal Hobart Hospital later in the week, and then an all-clear to go home to Launceston.

Tuesday morning, I caught a train and tram to the Children’s Hospital with our two-year-old, to visit strangers, to offer support, and the promise of a story, to let them know others care.

It’s what football is about. It’s what it means to be part of a club. 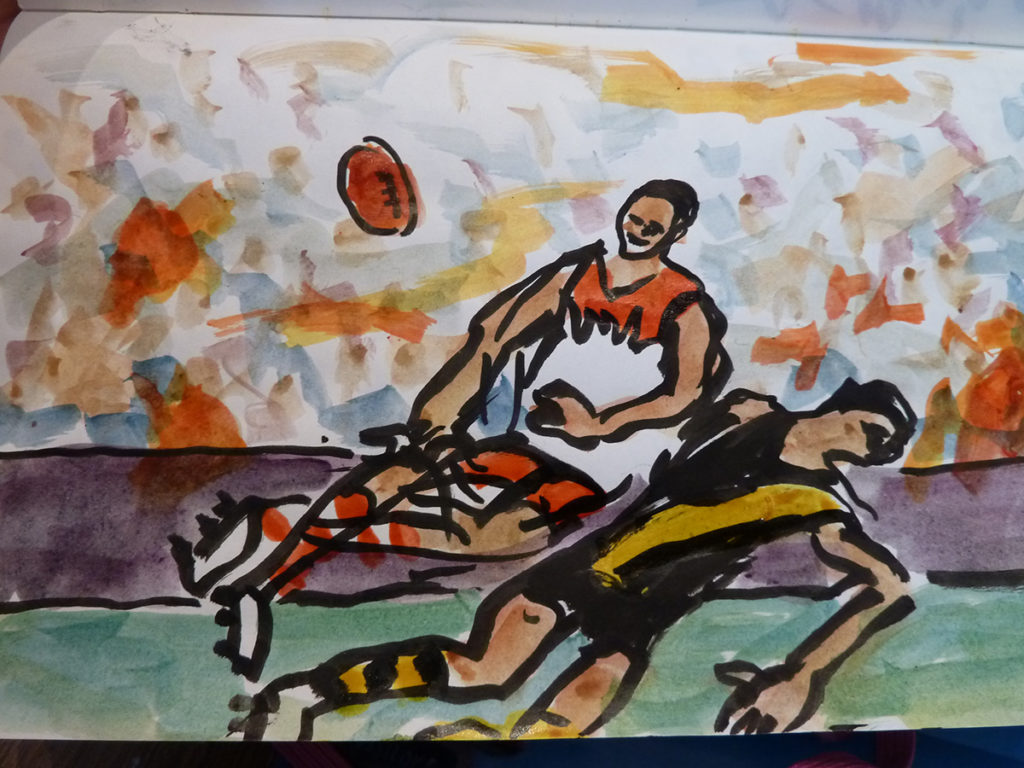 Last time we played: Buddy Franklin and a moment he surely regrets, a malicious ‘bump’ on our ‘Titch’, in another memorable encounter against the Swans.

I’ve only seen the last quarter of last Saturday night’s match, watched in the early hours of Sunday morning, after opening the liquor cabinet and going top shelf. I’ve never known anything like it. With two minutes to go, I couldn’t imagine how they might win, how they might get the ball from their end of the ground to ours.

I cannot remember when last I watched a Richmond game for the first time, knowing the result. Everything about Saturday night was tipped upside down.

Big @bgriffo24 you were amazing tonight. This is a new beginning for you, the start of something else.

From all I know of the game, hazy memories of the last quarter, I’ve equally wanted to tell Nick Vlastuin of a crowd’s shared appreciation (his last kick, hacking it forward as far as he could), and Dylan Grimes’ efforts (his first game back, he must have been exhausted, so heroic), and Lids and Dusty, and Brandon Ellis’ tackle at the death to win a free and keep us in it, and Shaun Hampson (WELCOME TO RICHMOND BIG FELLA, you’ve arrived!), and Shaun Grigg and Corey Ellis and Connor Menadue and their run and run and run, and Jack – of course, always, our spiritual leader – and Shane Edwards back to his best, as with Anthony Miles, and Taylor Hunt and Jayden Short contributing, and those two goals by Dan Rioli, brilliant.

And the maligned Steve Morris, who gave away a clumsy free kick and a goal, but in those frantic last few minutes he did all who could to get the ball and propel it forward, an attacking urgency that ultimately won us the game.

And Sam Lloyd, for this week a household name; for Richmond fans old enough to understand about Saturday night, he’ll never be forgotten.

Sunday afternoon, in a nearby park with Mr 6yo, kicking the footy together, he says, “Dad, did you see Alex Rance kick the ball over his head.”

Did I see it? All is forgiven about what he did late in the game against Melbourne. By our deeds we shall be known, by our actions from this day forward. He was tremendous on Saturday night.

But most of what was gained in a last-gasp win will be lost without following it up with another this Saturday night in the west. All will be watching. Double our efforts, boys, rest up and release an onslaught against Fremantle. The game has changed. Much is still to be played for. The passion is rekindled. Another win and the crowds will return. We all know the scenario.

It’s no time for meekness, Richmond, in the playing of the game, nor at the selection table. Football is a ruthless business. It slows for none. It’s time, again, to be strong and bold. I want Ben Griffiths to play an even bigger role this week. I want him to lead us from the wilderness, the warrior that he is.

Think of Jarryd Roughhead, and how blessed we are.

Life can be so fickle, so fragile. All of us are in it together. And we care, I know we do.

Postal address: for this week, on the top of Richmond Hill.