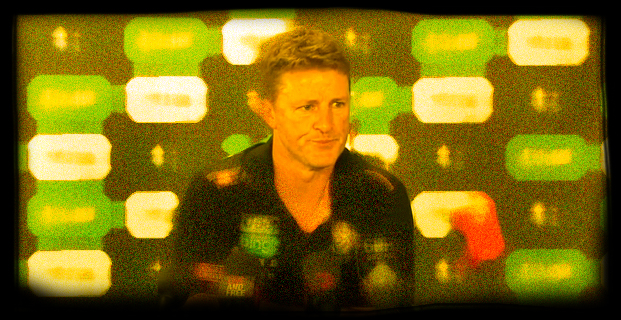 We are pretty used to this now; the high hopes, the slow start, the injuries, the scapegoats, the excuses, the footy media loving it, the coach in post-match giving away nothing. It’s all standard.

I am suspicious of any special pleading, the claims that Richmond is different. We stick out on some measures because we have a big membership compared to our historic ladder positions. Aside from that we have had a premiership drought (common), a bad run with injuries (common) we have lost some close games (common) and lost a string of finals (common).

This article by Jonathan Horn is one of many you’ll find as a Tiges supporter telling you that you’re amazingly devoted, your passion is unmatched, you are dyed in the wool, great for footy etc. Talk about having smoke blown up your arse.

I have floated the idea before that the fans are the reason for this club’s persistent failure. I don’t know if it’s true but I think it warrants consideration. The mythology is that we eat ’em alive, and while that phrase was coined to describe our team’s attitude to the opposition, it easily transfers to our administration’s attitude to the coach, and our fans attitude to anyone at the club that’s perceived to be underperforming.

And there are certainly savage responses when we lose the games we shouldn’t; but what club doesn’t have that? Maybe the Giants and Suns are too new to have developed that irascible, scarred, one-eyed hard core that loves a club scapegoat, and thrills to the sound of the knives being sharpened outside the coach’s office. But every other club has this.

What I see on field are inexplicable brain fades. Our problems are so often mental. I do not know what our game plan is, but I’m sure the players do. And its probably a good one. I believe hand-on-heart that Hardwick is a good coach. He has out-coached the benchmark, Alistair Clarkson, on several occasions – the bloke can do the job. I just wonder if the mythology of us as some kind of superfans breeds fear and second-guessing in the players. I am certain that in part it is responsible for the “four walls” nonsense. A few microwaves and some chicken shit and someone once spat on Spud Frawley and that’s why we can’t have nice things. It’s often said that our players are the dumbest, and its often a Tiges fan doing the talking. Now – Cotch giving away 50 by collecting Darling around the chops looked dumb. But his leadership had been bagged all week in the papers, radio and on the TV modular lounge suite programs. I understand why he might have done that.

We try to walk the tightrope here at TTBB. There is no point in just writing Go Tiges, You’re All Lovely Boys. Heads Up! Well, there is room on the spectrum for that but we also have to be a voice for the reasonable frustrations of the fans. Again – any club will have this when they are 1-3 after playing regular finals and expecting to do so again.

April is not a time to point the finger at recruitment. Our unit have a good recent track record, and its early days. But I have a lot of selection questions which I will try to couch in positive language

I agree 100% with Andy’s piece today; the club is in great shape. We are miserable because we have been moderately successful and so we have moved the goalposts.

We on this side of the fence can do our part.