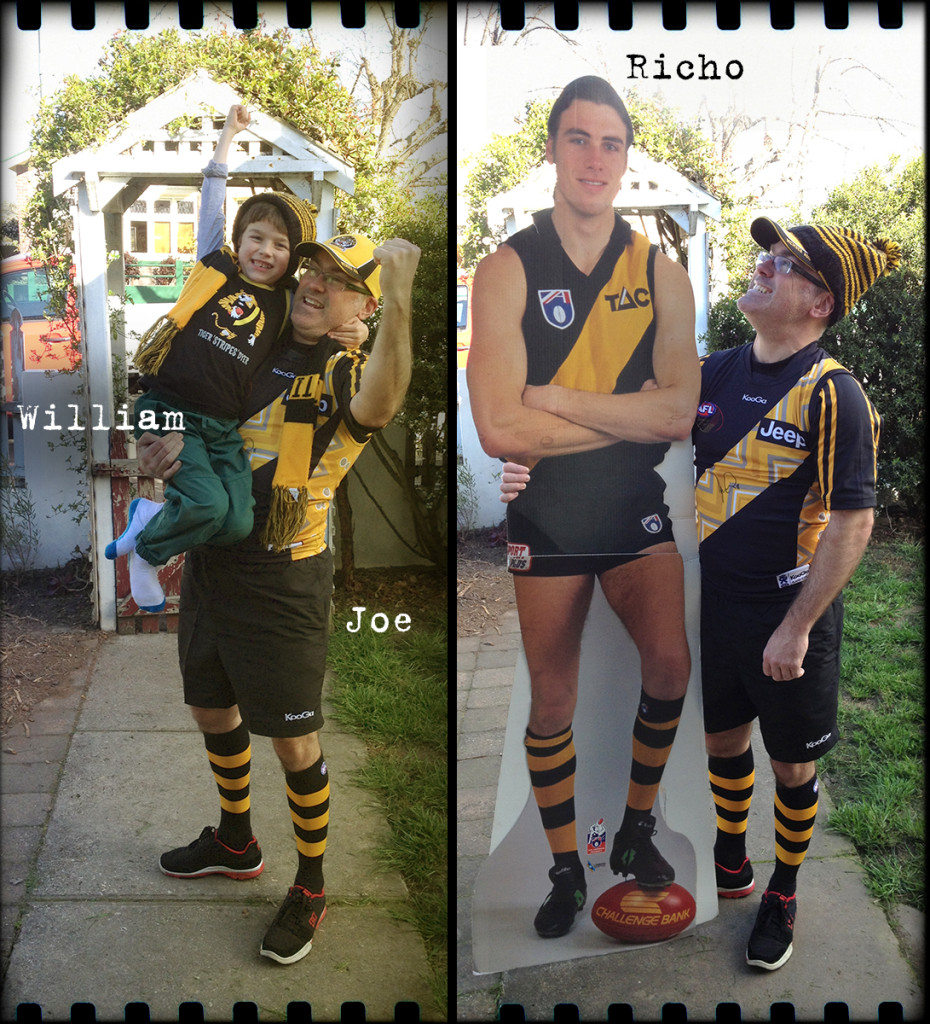 I took a lot of notes while watching the Tiges/Dogs game on Saturday night with the intention of writing a Benny report full of super-accurate reportage based on my Flanagan-like scribbling. The notes were on our kitchen table…and then they weren’t. So, apologies for what follows as it will be a rambling effort based on my dodgy memory, not at all helped by a few glasses of full-bodied McLaren Vale Shiraz and an already too long week of work, u/11 soccer and u/19 hockey.

I walked into work at the start of the week and I’m greeted with ‘So now we see where the Tiges are really at’ and ‘Are they deflated balloons in your pocket?’ The glee with which these lines were delivered surprised me, particularly considering the first came from a Hawthorn supporter – not exactly setting the world alight – and the second from a Footscray supporter, who knows full well I was rapt with their barnstorming run in 2016.

In past seasons I’d have fired up and defended our boys but this season is different; this is the season of hope based on genuine on-field improvement and the slings and arrows from the fools who follow lesser clubs bounce harmlessly off my armour of optimism. I give them nothing.

I watched the Tiges/Scraggers game on TV with my Bulldogs-loving wife and my vaguely-interested-in-the-Tiges-because-dad-is son. It started well for the Tiges; we continued our AFL dominance on the Ivan front with another Ivan pulling on the yellow’n’black and, despite the fact he is a mere sapling, he is a bloody big one. We bolted to a decent early lead and everything seemed to be set up nicely for an upset win. Unfortunately for the Tiges, big Ivan’s game was mirrored by the Tiges’ game; it started well, but experience and class won eventually wore us down.

I’m not at all upset by the loss, despite the fact we put ourselves in a position to win, because the team has a mixture of solidity and potential which I haven’t seen since I returned to Australia in 2000. The kids are alright: Dan Butler looks a ripper and his shoelace pick-up and snap from 35 out was brilliant. Ivan Soldo was super-competitive early and once he develops an AFL engine he will be tremendous. Dan Rioli had a quiet night but we’re all excited to see what he produces as the seasons roll on. Jayden Short’s disposal is first-class. Kane Lambert is the energiser bunny. Oleg Markov has great hands and looks like he has plenty of poise. The future is bright.

Our ‘older’ brigade stood up as well. Jack is growing as a leader and this is exemplified by his outstanding tackle count in 2017. I will admit; several seasons ago I would have traded him for half a pack of barbecue chips. Not now. Grigg is, for mine, our most consistent player. Grimes and Rance are a fantastic pairing at the back. Dusty went a bit OTT early with the ‘don’t argue’ but recovered to put in another excellent performance. Bachar played well without being outstanding. Cotch was quiet but he has had the best start to a season for yonks.

Watching the game I thought, ‘Imagine if we had a fit, motivated Chris Yarran running off half-back.’ A skilled, line-breaking half-back really is one of our key missing ingredients. And then I remembered, ‘Jason Johanissen is up for grabs.’ And I’m serious. Given the number of very young players at Tigerland we surely have room in our salary cap to get him to Punt Road. So this week, as well as handing out Benny votes I’d like feedback on the ‘Get JJ to Tigerland’ bid.

Here are the votes:

5: Grigg – while our other senior players had highs and lows, Grigg was a model of calm, classy consistency

4: Jack – tried his heart out all game and got us off to a flyer

3: Dusty – as mentioned, a bit predictable early with the don’t argues but smashed it after that

2: Rance – some remarkable efforts in defence and some excellent run from the back

1: Grimes – just about my favourite Tiger – as tenacious as a post-curry dag

And finally, for my work colleagues:
The Tiges are 5 wins and 2 losses.
We have lost to Adelaide in Adelaide and the reigning Premier.
This will happen to most clubs.
Get stuffed.
Go Tiges.