Heading into the Port Adelaide game the thoughts through this writers head was about banking the win. On a day like it was, with the glorious sunshine, it was important to put this game in the back pocket. The week before was different. That GWS game had significance for the club and fans, given that during the week we were pronounced as ‘flag favourites’ by the football media. Richmond as flag favourites… three weeks after three straight losses to middle of the road Adelaide and North, plus actual contenders Geelong. In the intermediate three weeks, a bye and the opportunity to beat-up on the Gold Coast and St Kilda.

Heading into the Port Adelaide game the thoughts through this writers head was about banking the win. On a day like it was, with the glorious sunshine, it was important to put this game in the back pocket.

The week before was different. That GWS game had significance for the club and fans, given that during the week we were pronounced as ‘flag favourites’ by the football media. Richmond as flag favourites… three weeks after three straight losses to middle of the road Adelaide and North, plus actual contenders Geelong. In the intermediate three weeks, a bye and the opportunity to beat-up on the Gold Coast and St Kilda.

After proving ourselves last week, the most important thing against Port, was to back that up with not just a win, but a solid win. A win where we displayed the Richmond way of footy that reinforces our chances for 2019. System, structure, style.

So we come to a very bright sunny and warm Saturday afternoon in July. “Big boy month”. The month that usually catches the Pies out, as they end to tumble down in July. Possibly the most significant month of the year, outside of September.

And on that bright sunny day, the old cliché “if you can’t play on a day like this”, etc was wheeled out. I was lucky enough to be invited to the game by Ryan, the Exiled Victorian, and joined him in the rather salubrious level two of the southern stand. All padded seats covered in jackets and scarves as far as the eye could see. Cup-holders! Attendants directing you to the bars ‘behind the glass’. Rare air for this M55 regular. Footy in the sunshine with bright and friendly company… a great day in store.

And entertaining footy by the Tiges to match the weather was the order of the day. A three goal to nil first 10 minutes saw to Port. Well, it didn’t completely finish them off as there was still 100+ minutes left, but you just felt that they were already done.

Prestia was good early, as too Bolton who had runs in the centre setup. And Lynch was out of the blocks early. Delightful footy.

And so it went for the day. Richmond holding off the Power after each thrust by them, and also working hard enough to increase the lead at each change. Winning every quarter. Dustin Martin was back to his best. Brandon Ellis copped a lot of rubbish from our section of the stands but pretty much proved the mockers wrong, bringing lots of drive from the back. He’s had a great year given his 2018, and I hope he stays. He’s almost a ‘best 22’ for the pointy end of the year.

At 3/4 time I said to Ryan with some shock and alacrity “Hey wait what? Is it three-quarter time? It can’t be!”. The game was just so fun that it didn’t seem like we were at that point of the game.

What can anyone say about Grimes and Astbury that hasn’t been said already? Both were imperious and unbeatable. Broad plays a lesser role but is also vital. Unrewarded by footy media chat. Such a redemptive two seasons he has had. Big fan of the plumbers apprentice.

The last quarter became a bit of a parade as we continued on with it. Solid enough footy against another contender with lots to play for. As up-tempo and ‘on our game’ as we have all season. A pleasure to watch, and their best game of the year so far (that I’ve been to). I did tweet at the end that it was such a good day that the game should never have ended.

FOR THE LOVE OF THE LITTLE THINGS

Still influencing the club. Publicly but without fanfare.

From the Skipper cleaning up the rooms after a game to Nathan Broad picking up Tex’s strapping to now @JackRiewoldt08 picking up rubbish on the ground. My club is the best #gotiges #AFLTigersPower pic.twitter.com/UgNkDdQPti

The Brotherhood of Players.

Jack, and scrambling a dink of a kick forward from a contest, picked up by Stack (who pressured the ball out of the Power’s control), and then Stack handing the ball off to Brandon for the goal.

Rioli and Stack with their muted goal celebration late in the game.

Ivan II’s goal was a highlight. Not for his (should be trademarked) dink of a kick over the umps head and into row D, but for the player reactions around him. First to Ivan to celebrate was VFL ruck partner Mabior, who also celebrated with arms in the air as the mark was taken.

What a display by both Tommy Lynch and Jack Riewoldt. Working off each other and not in each others way. Some of the positioning and body work by Lynch was liquid football.

With almost every play the drive is forward.

Chol grabs a loose ball out of the ruck and takes them all on with a burst out of the congestion, while at the same appearing to be in no more than second gear and not even looking like moving to third. He follows it up with a lace-out kick to Lynch. Chol has a huge upside we have not seen half of yet.

An outnumber in the forward 50 and we still shunt on. How ridiculous is this game that Lynch can be 1 against 2, have a ball kicked in his general direction (by Rioli?) and then the bounce of the ball sets him up for a goal around the corner while being tackled? Ludicrous. 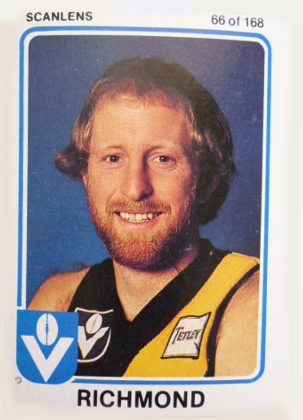 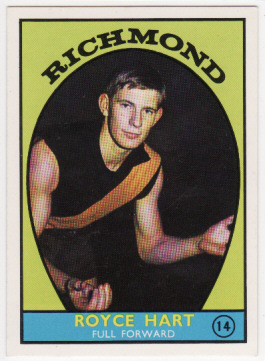