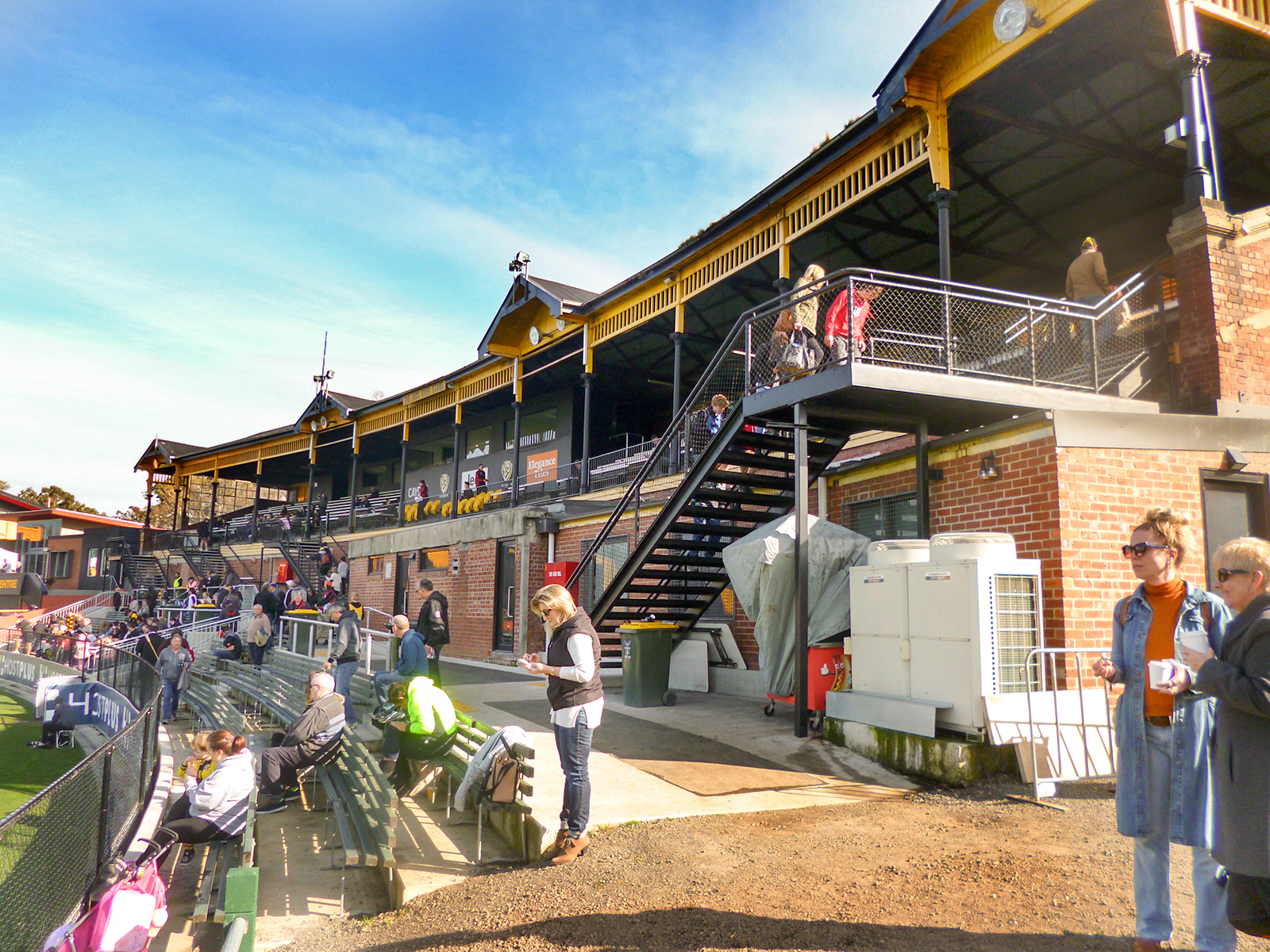 For the first time I watched a game from the heart of Tigerland: the Jack Dyer Stand

On Sunday I saw the VFL side play for the first time, at Punt Road. They were absolutely terrible, getting flogged by Coburg who were just below them on the ladder. Matt Dea and Hampson looked a class above their surroundings but the standout players were all Burgers. I honestly don’t know how blokes on the verge of being promoted to the Richmond seniors can shine in a side playing at that level. 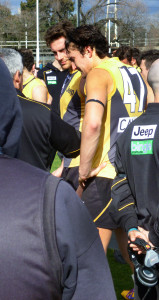 Ivan Soldo is indeed very, very tall. But he runs like a man made of balloons, making his cousin Big Ivvy look like Matt Shirvington. The Bean moved around purposefully but the delivery was terrible so he had nothing to work with. Gordon and Menadue bobbed up but I recognised them more by their numbers and haircuts than any particularly impressive play. Castagna looks useful and Dave Astbury did a few eye-catching things.

We nipped off just before the end to hustle through the park to the MCG. I was with Josh down from Wagga (Kangas fan @armchair_footy from Twitter)) and Dugald. We met Andy (@Harri_Chas from Twitter) and the Lapsed Tiger at the gate, and through craft and guile managed to all go and sit together in their sensational seats. It was the best view I have ever had at an AFL game. Andy warned us that this was a “polite area” – I did boo the score review at the final siren though.

The Tiges took a while to get going, but six goals for the opening quarter suggested they were going to push for the big win that was there for the taking. Lids is in career best form in my eyes, he and Grigg led the run and spread. There was a sensational running goal to the potato magnate. The word that kept occurring to me was “silky”– we were not doing the grunt work when we lost it (1 tackle for the first quarter) but just looked classy when we had it. 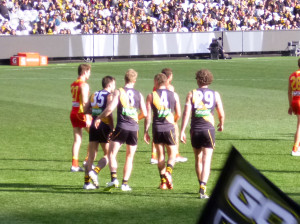 Lennon gets the plaudits after an assist for Jack to goal.

Then the 2nd quarter reset the story; it was still going to be a win but a lame one with no benefit to our %. There was a lot of keepings off but the urgency had gone out of the game somewhat. The army was rumbling with discontent, we had come to see goals. Lambert took a brave mark, shook off the damage and converted well to settle us down a little, but the Suns won the quarter. Ty kicked goals regularly but seems to be relishing his panto villain role; he’s added some Cristiano-style prima donna moves. After someone else goals, he has a few moments thinking what might have been before he joins in the high fives.

Gold Coast had terrible luck with injury, Dixon turning his ankle just after half time when they had subbed off Nicholls. Later Jack Martin clashed heads with Cotch and had to be wheeled off. This opened the door for us to pile on some scoreboard hurt, but it took a while to happen – eventually we gained 5.5% which is pretty handy around now.

The 3rd quarter started with a fantastic slips catch mark and goal to Newy. The game needed Dusty, and he appeared regularly to put an end to an aimless chain of handballs with a dash through the lines and either a goal or a kick to advantage into 50. Ivvy made a couple of mistakes, such as the one on the goal-line where he flapped at the ball like the new Chelsea-version Petr Cech, and let Tom Lynch snare a goal. 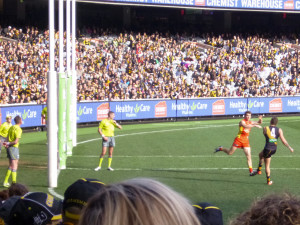 Dusty gets a practice run for his bender. He was way off his line and had to take it again.

Matt Thomas did his job well, and it was reassuring to see he’s still got it, at least against lowly opposition. But something’s gone wrong if he’s in the 22 in 4 weeks time. The other ‘in’ was Steve Morris, who parked his car near me earlier in the day. I could have lingered and wished him good luck as he got out of the car – why didn’t I? I tend to like the players to stay at a distance. He shook off the disappointment of being snubbed by a graphic designer, and was energetic and desperate. If he gets another chance in a final playing in defence I won’t arc up. But if they were decorating the Superstore again they’d be unlikely to feature a life-size Stevie as they do now. The wheel turns.

Which brings me to Chris ‘Newy’ Newman who has just announced this is is last season. Like this bloke painting his fence, you sense he waited until we had locked in finals. Newy ran down Malceski in the 3rd quarter and it felt like a couple of old dogs just having a fun time in the sunshine. He is still contributing and I suspect at least half of what he gives the team is not out on the field, and will be much harder to replace.

Even in our 8-goal last quarter there were long stretches of doldrums where it felt like we didn’t know what we wanted from the game. Percentage boost or no injuries? Practice at putting the foot on the throat, or practice at just doing the first stage stage of the slingshot, over and over? But that is ungracious of me because we were also treated to some champagne football. The highlight of the match for me was Jack’s soccer pass to Lennon who marks, and finds Jack who kept running. He could have kicked it from there but squared it to Lids who goaled.

I don’t know about you but I have never seen the Tiges win by 83 points. For those keeping score at home, this is just my 4th Richmond win, after the ’99 Ponsford Stand Inferno v Carlton, Swans R23 at ANZ last year, and the recent Dreamtime game. I am genuinely just happy to be there and sing the song. 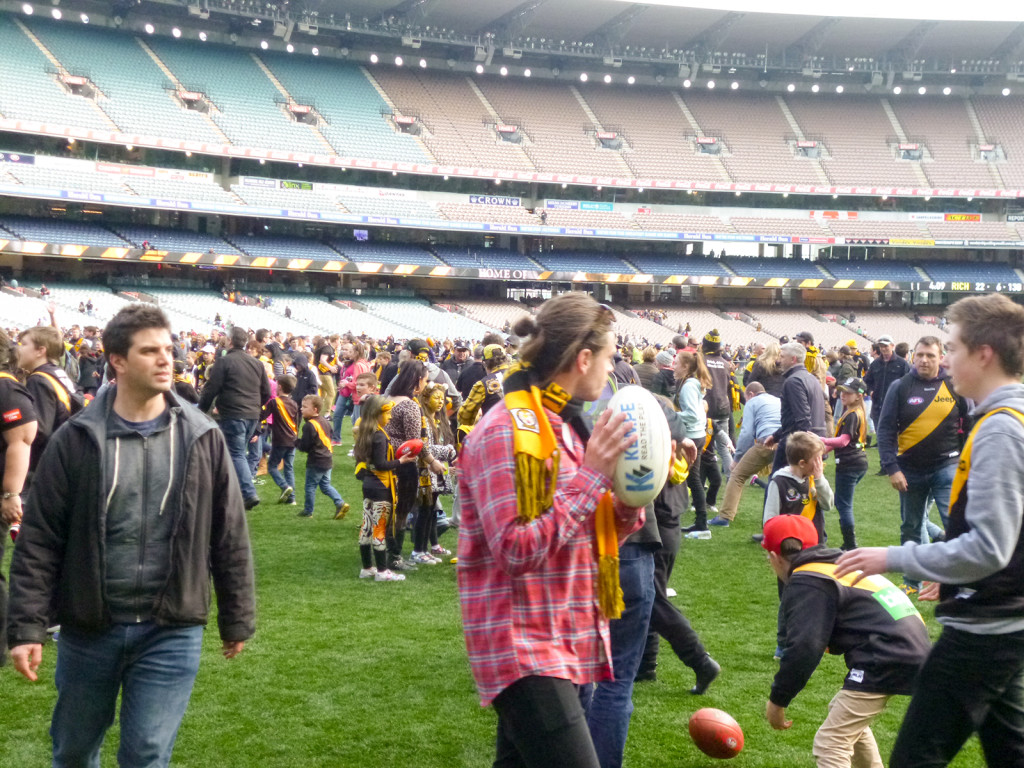 Mayhem on the MCG – this is after the crowd thinned out a bit.

After Tigerland we had a terrific treat, being let out onto the turf for kick to kick. Dugald and Andy had to head off, but Josh, the Lapsed Tiger and I got out there with several thousand other people and about a thousand footies. We pinged little Cotch-style passes around over the heads of toddlers and past the noses of adults, and then found ourselves mostly out of sight of each other but able to communicate by means of longer chip kicks. It was hilarious, I think we all grinned til our faces hurt. When we were ordered off we continued outside, joined by James (@ichymochek) from out Sunbury way. Just four blokes who met over Twitter kicking a footy around outside the MCG like kids. Happy days.