A funny thing happened on the way to September 2017.

A little background first, if I may indulge. I’m a fourth-generation tiger, going back to my great-grandparents and their home on Richmond Terrace, just across the road from Punt Road Oval and the MCG. I go to the footy most weeks with Dad, my 80 y.o Nan, my great-uncle and cousins, as I always have.

I am also the daughter of a loud and proud card-carrying Hawk, who waves a flogger in the cheersquad and has missed only one Hawthorn Grand Final in her lifetime: 1989, where she stayed home with her 5-month-old daughter (me) and has never let me forget it. 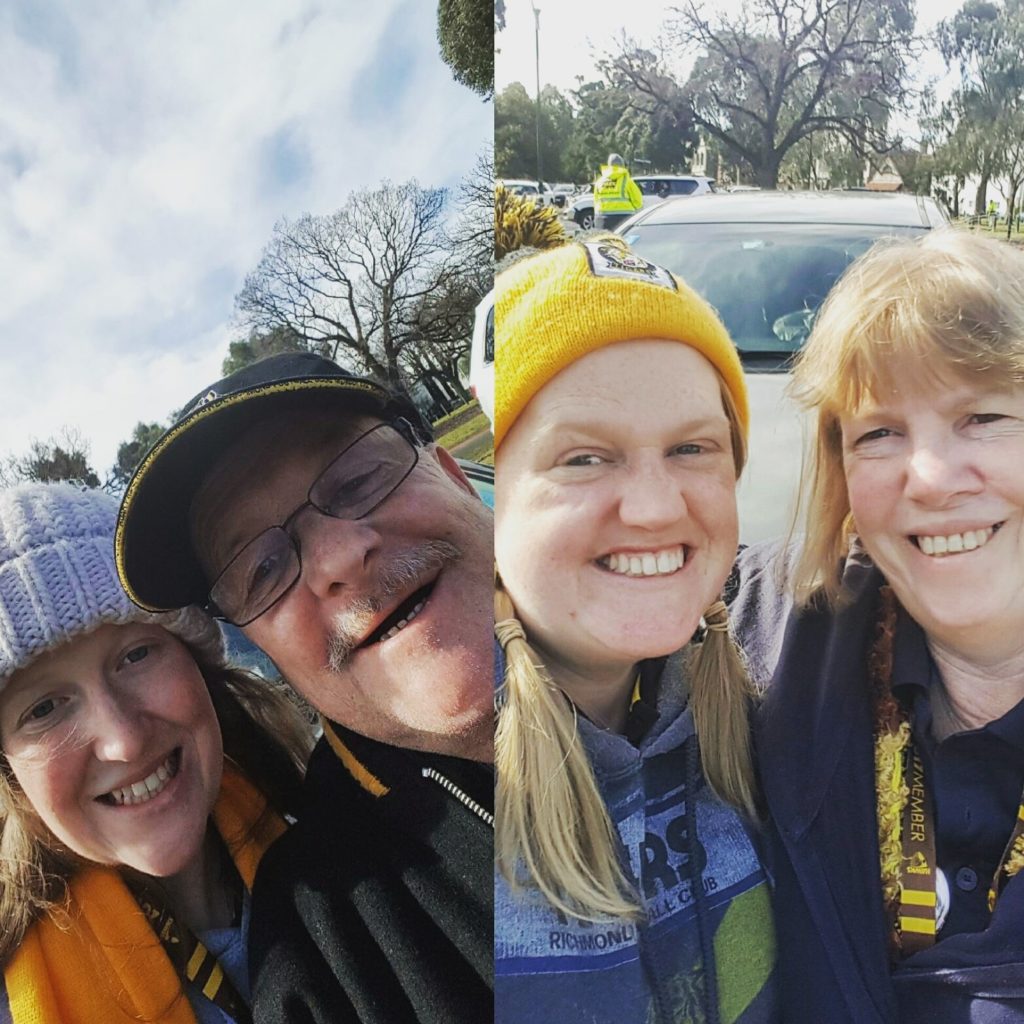 I’ve watched from the sidelines as my Mum and younger sister have revelled in Hawthorn’s success over the last 9 years, I’ve even gone as far as driving Mum to the G on Grand Final day, a strange, empty feeling it has to be said. I’ve been invited along too, after the third flag I think, but I declined politely. I can’t go without the Tigers there, it wouldn’t feel right. Mum has always been kind about Richmond, she watches when we’re at games, until it gets too close, she cheers for us and gets frustrated along with us, but at times I’ve marvelled at how she doesn’t quite get it.

“Come on! We need the percentage!” she’ll shout, and I wonder what that’s like, to feel so comfortable winning, that you can be thinking about percentages and ladder positions.

Like Sam Mitchell’s kids, not quite understanding that Daddy doesn’t just go up and get a medal every year, that going on the ground with the streamers isn’t just a regular part of a footballer’s year.

So, it came to our clash against the Hawks a few weeks ago, full of run and tackles and forward pressure, and another strange feeling came over me. I felt like we would win.

I can honestly say, that even when we seemed to be a bit of a bogey team for Hawthorn, I had never expected us to win. Obviously 2017 wasn’t a great season for Hawthorn, but this felt significant, this year feels significant.

2017 has been so vastly different to last year. In 2016 we languished, put in poor performances and suffered some shocking defeats. Our leadership, on and off, was questioned relentlessly (and at times, unfairly)

Our football is better, our attitude seems better. The players speak with more confidence, about family and friendship, and breaking down barriers between teammates.

So much seems to have changed.

Now I confess, I wrote this next part a few weeks ago, in the lead-up to the Geelong game in Geelong. I was nervous, enough that I could barely sleep, and I began thinking about expectations. Richmond and expectations, Geelong and Hawthorn and expectations. I didn’t want to jinx anything, so I didn’t post it.

I’m not ready to expect a victory against Geelong. I was in year 11 last time we beat them, year 12 when we were destroyed by 157 points. My best friend, raised in a non-traditional (non-football) family was genuinely excited for ‘the other team’ she’s now engaged to a passionate Geelong fan. I still think I can swing her, she does still have a Brandon Ellis badge.

Geelong has for so long felt out of our reach. Even though we beat Hawthorn in premiership years, there has always been something about the slickness of the cats.

I’m trying to keep my head. I don’t want to talk about finals or ladder positions, though I’ve run optimistically through the predictor multiple times. I don’t want to hear about sure things or certainties, because in my time as a Tiger, there has never been such a thing. I don’t want to think about Dusty’s contract (He’ll stay, he’s grown up with this club, and he couldn’t disappoint Harper Cotchin) because the more people talk, the more I begin to waver in my conviction.

“Were you stressed when we came back a bit in the last?” Mum asked, on the way home from the ground.

“Of course,” I replied, “We go for Richmond. Stressed is our default setting.”

Expectations haven’t been our friend. There’s no denying this, in the past, we have stumbled.

Our Centenary game, the elimination finals, Tom Hafey’s tribute match, most of 2016.

But I say in the past because there’s that strange feeling again, the feeling that things might be changing. We have truly exceeded expectations already this year, and who’s to say where that will end.

Now it’s 3 weeks later and I’m ready to beat Geelong. I’m not calling it expectation, let’s call it confidence. I feel confident in our game-plan, in our pressure, in our attitude. I feel confident that on the MCG we can play some damn good football. We can do this.

I went to Catland, with my best friend (in a Cats Ugly Jumper, shame) her fiancé and his Dad. Sidenote, fiancé’s Dad heckled Jack in the warmup as Jack took a shot from the pocket. Jack slotted it, grinned and gave Old Mate a thumbs-up. Best part of the day.

I left feeling ok. As I tweeted:

We have come so far. This time last year we’d been smashed by the Swans and played a terrible, demoralising last round against the Saints. This year we finished the season by winning 2 games we should have won, one of them by 104 points! We played with swagger against Freo. Honest-to-goodness swagger.

Expectations might be high, but we’ve so far exceeded them.

I was wrong a few weeks ago. Not about Dusty, thankfully. There is a certainty at Tigerland, The Tiger Army will be there, in any weather.

2017 has been a strange season, a season of growth and learning according to Mum, who has handled Hawthorn’s journey this year quite well considering. Close finishes, moments of great joy and agony in defeat, Jarryd Roughead (because really, he is the story of 2017) and farewells to retiring greats – the players I’ve grown up watching, really. What’s one more strange happenstance?

Why not Richmond, rising to further exceed expectations?