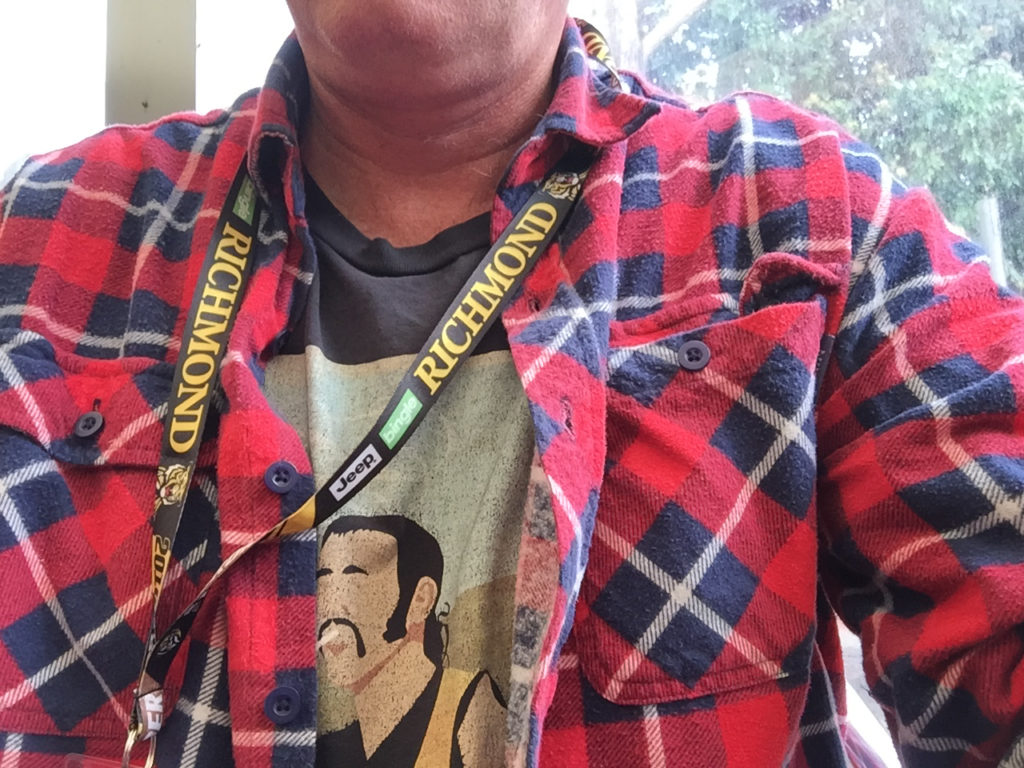 I upped sticks from Andy’s place, dropped my stuff at Dugald’s for Night 2 of the pilgrimage, and headed to lunch at the London Tavern in Richmond. I am not a gifted bon vivant, raconteur or bain marie, and so my attempts to organise a gathering were feeble and unsuccessful. Next time there will be more notice, more hoopla and possibly door prizes. Tiger jumpers (and one or two furtive Saints) were everywhere. I relaxed with a chicken schnitz and a Guinness, and tweeted my location and the above photofit image. Tumbleweeds, crickets. But I was enjoying the atmosphere anyway, of one of Richmond’s favourite pre-game pubs before a should-win game. (One block from Ralph Carr’s office, by the way). On the way out of the pub I got my first loose-ball get of the day as I passed some kick-to-kick in Richmond Terrace.

I arrived at Punt Road Oval to see the VFL Tigers giving standalone Coburg a bath. A few players had been rested for this, Bachelor was watching and Stengel, Maric and Mendaue were not out there either. Some other observations;

With no help from my bad directions, Sean Ross (@sjhross) tracked me down and we talked about babies, Sydney v Melbourne and Tigers, Tigers, Tigers. A bloke beside us chimed in that he was at an intimate pre-season insiders-only Crown lager-style knees up with Dimma. Desperate for a shred of hope after the poor showing of 2016, he begged for something to hang his hat on. Dimma said one word; Rioli. 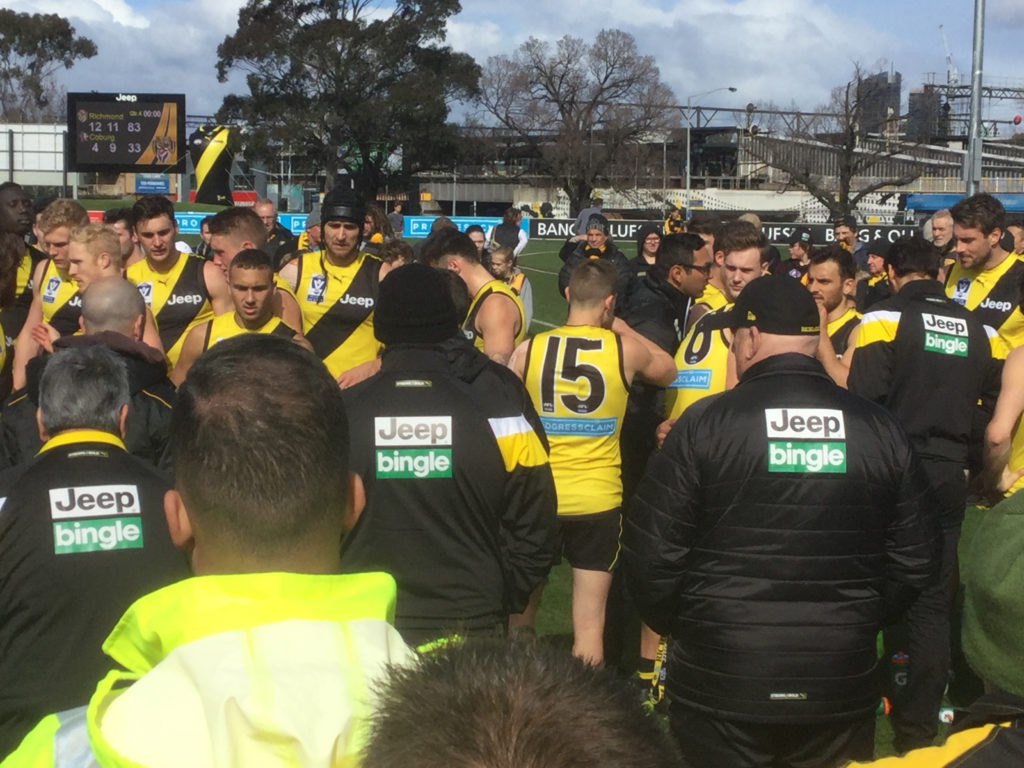 Having discharged family lunch duties, Andy rejoined me and as the VFL game wound down, we headed up the hill to the big ground.

After bag searches and a thorough wanding, I was stuck at the turnstile when it turned out I had brought my 2016 membership card. Huge thank you to the steward who sussed that I wasn’t trying to be smart – this must happen a lot I guess. She suggested I go around the RFC membership caravan and see if they could rig me up a ticket. Fortunately that went smoothly, so I went back through the searches and then commenced a search of my own for Andy.

My knowledge of the MCG has hardly improved at all despite fairly frequent visits. It looks different full to half-full; and things seem to change regularly. Andy likes to move about during games, and I was interested in seeing it from different vantage points too, as well as not losing my native guide. I found him in the area near the Cricketers Arms known as The Grog Squad – and whaddaya know, with him was the famous Swish Schwerdt (@swishtter) keeping a low profile in his Adelaide Crows cap. It was great to see him again. Swish writes for the Footy Almanac and is a wise presence on Footy Twitter as well. The Grog Squad of 2017 probably compares to that of 1987 like a labrador to a hyena; people don’t bring and drink an esky-ful any more. Still the barracking was blue, occasionally funny, not very creative but lively all the same. Swish has written his outsider impressions here at the Almanac. Didn’t love it. Someone called a Saint a retard and apart from that it was all pretty much within community standards. I enjoyed being behind the goals and the cheersquad, and it gave me a story to tell at work. Jake Carlisle in white long-sleeves attracted some lifestyle advice. “Why don’t ya sniff some more coke, Carlisle!”

Like a few games I have been at, the Tiges kicked to the far end and started constructing a decent margin from the off. Fortunately this continued in the 2nd quarter so we could see a few sausage rolls close up. Young Towners continued where he left off. From a standing start as a defensive midfielder at VFL level, he has come in and kicked 6 against Freo and had 2 in the first and another in the 2nd. The Saints looked dead flat. In his last game Nick Riewoldt was invisible. At one stage we were up 9 goals to one. Jade Gresham seemed to be the Saints’ only scoring option. Displeasingly he snagged two in quick succession to bring some unwanted competitiveness to the game. The Butler got a late one to at least finish the quarter on the up. Halftime score Richmond 11.5.71 to St Kilda 4.3.27.

Andy went off to see someone and didn’t return until the next break.  If we were a membership more secure in our finals birthright (see Hawthorn), we would have treated the 3rd quarter as the ideal lull to just go for another craft beer, or catch up with old Kayden who is now mostly doing conveyancing. (Tie over the jumper or under?) But as we are nervous nellies expecting fate to kick us up the backside at every turn; the 3rd quarter was painful. The Saints kicked four goals to a single yellow and black contribution from Jack Riewoldt. All through the third quarter Richmond fans educated Swish with their creative calls.

We had a bloke nearby who had clearly asked his mum for a Dusty haircut. Looks to me like mum had no idea so bloke had had to describe it, with mixed results. And same deal with his neck tatts. The cougars in front of us were like a 3rd-wedding hens’ night gone bad, with plenty of classic repartee like “That’s too high you fuggin blind maggot”. The last break came not a moment too soon, and I went for refreshments with the score at Richmond 12.7.79 to St Kilda 8.6.54. They doubled their score that quarter.

I got back as the the Tiges put together five minutes of sustained pressure, punctuated with goals through Dusty and Towners (4th) that just about put things beyond the Saints (more importantly this nailed down a top-four finish for the first time since 2001). The Tiges were coming home to our Punt Road End and they put on a good show. They Saints had a few chances and sprayed them, until Gresham got one back, but the mood around us had settled into relaxed confidence by this stage, and became generous and even magnanimous as the clock wound down. The rest of the game was a pretty bruise-free procession, with nothing more at stake for either side. In the flurry of Tiger goals Towners got his 5th (eleven in 2 weeks) and Prestia nailed one on the run. The Dusty song got many airings (“Oh Dustin Martin, you are the love of my life …” sung about various players in the EPL since at least 2005). 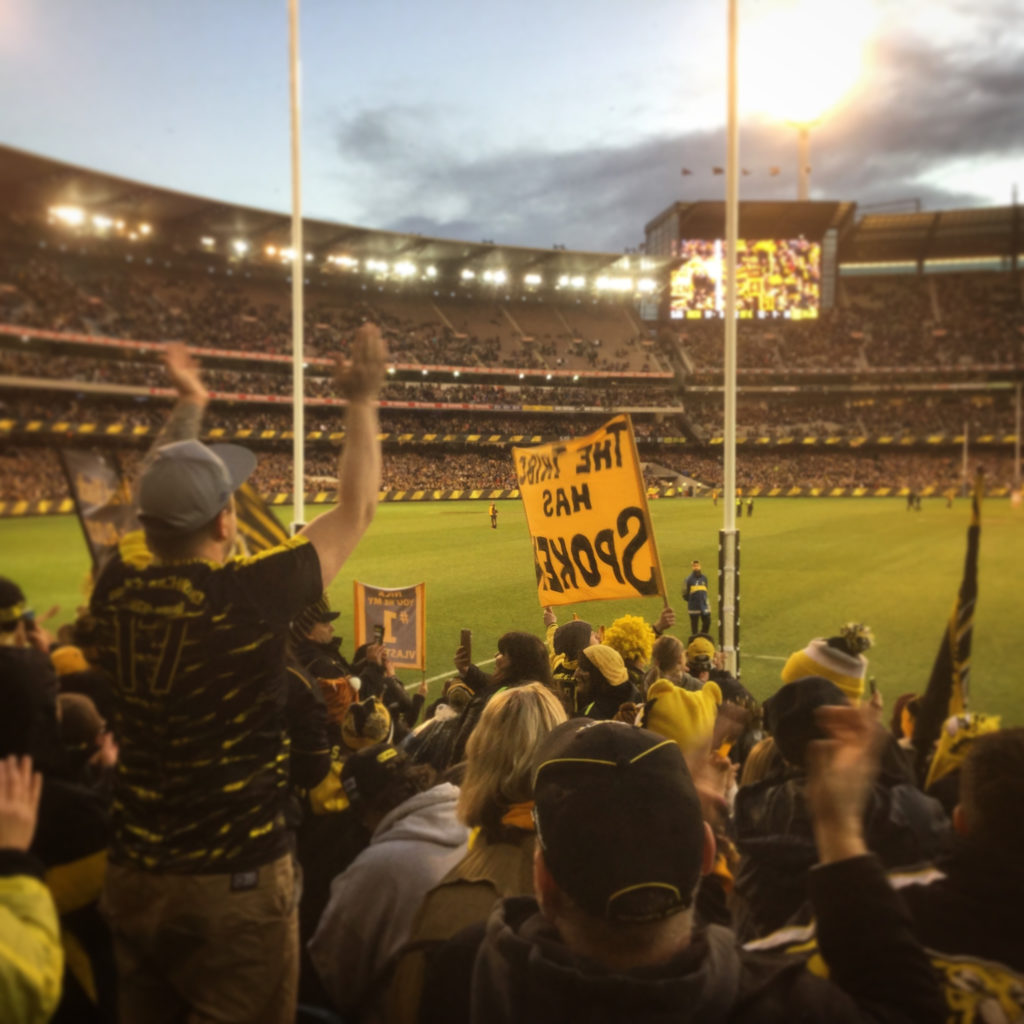 Good to be in the vicinity when the Tiges wrap up the 4 points and Trout puts up his THE TRIBE HAS SPOKEN banner.

All the Tigers around us applauded Saint Nick as he was carried off by his cousin Jack from Richmond and Big Jack Something from St Kilda. Saints fans left quietly and weren’t subjected to any crowing that I witnessed. In fact the next day an elderly Sainter with a Lancashire accent rang Melbourne 774 talkback, and cracked up a little as he said thanks to Richmond supporters for respecting the retiring champ. I had a bit of a sniffle myself.

Andy charged down to the fence to soak up the atmosphere; and I followed him it was a Richmond celebration too far for the Adelaide Crow in Swish. Sorry again I dashed off on you and all the best to the tricolour hoops for the rest of September. 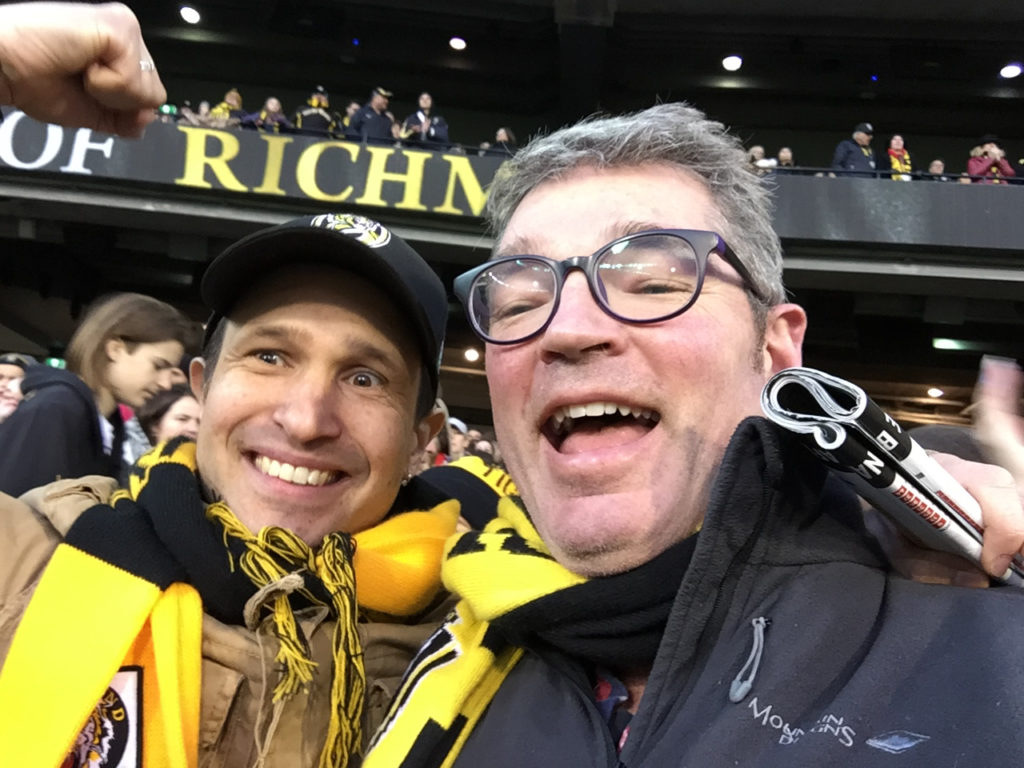 Andy and I enjoying the win; but I am mostly laughing because I can’t work out how to selfie.

As Andy and I made our way out, we walked smack bang into the Grog Squad’s celebratory reading of the seminal late-period Malcomson work Tigerland. They and we and everyone in there gave it the kitchen sink. A security guard winked at me and said “Don’t worry Geelong will get ya”. Outside I left Andy to prepare for his family trip; spending this glorious September full of Tiger possibilities, in Indonesia. I headed to the vacant Jellie residence with instructions to light the fire for their imminent return from Sydney.

When I got there the woodpile in the backyard was inaccesible; the back door was blocked with an anvil. An anvil. I tried the side door for possible firewood access; it was tied shut with rope. I had somehow found myself in a cartoon.