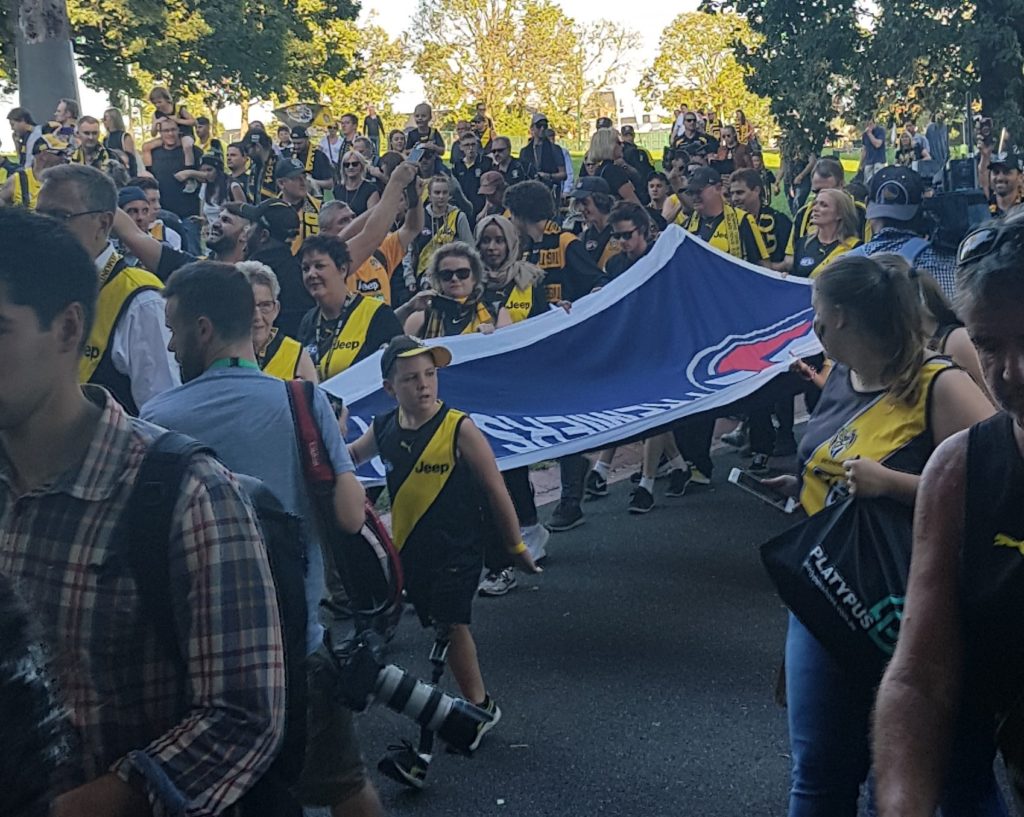 Eleven hand-picked Tigers carry the Premiership Flag to the MCG, with a lot of help. Photo by @aspeedingcar

Chris turns a few minutes before the game, asks if I can write a match report.
Borrow pen and paper, a season’s notetaking begins. 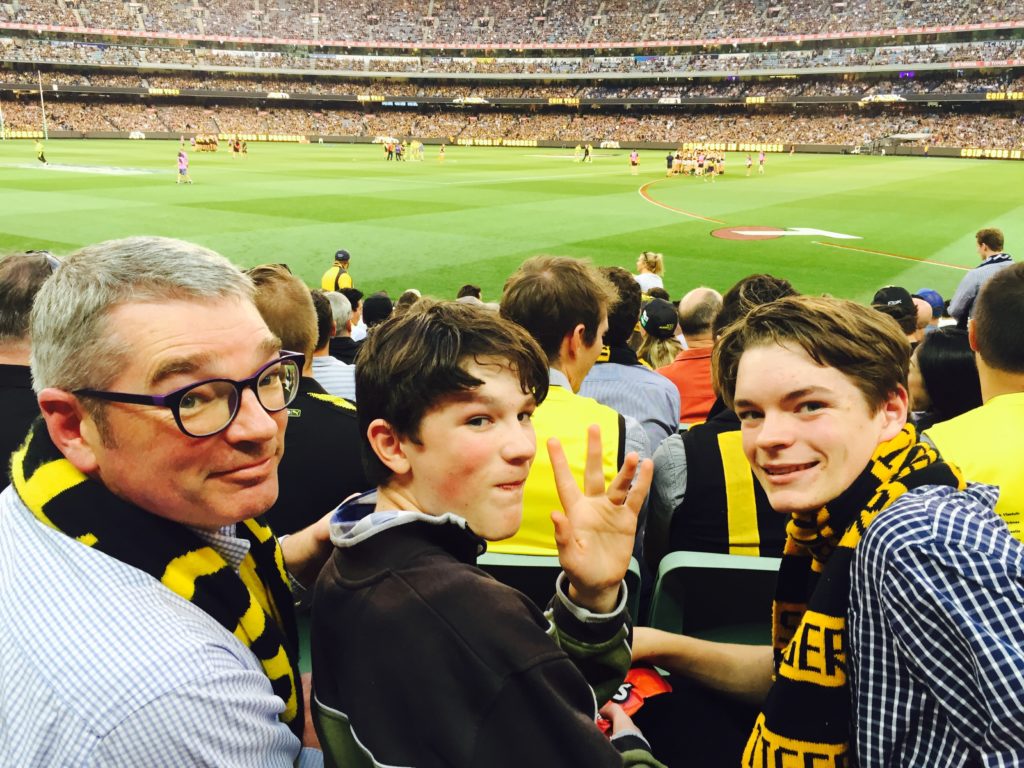 “You’re up Duges”. Chris, Michael and Marcus Rees. Michael seems to be tipping Tiges to win 4 in a row, like the Collingwood Machine. Audacious.

Q1.
Third goal to them. Is this what they call a ‘premiership hangover’.
“Have we hit a target with a foot pass yet,” asks one in the crowd.
Jarrod Garlett on debut kicks a fourth for them and our party, if not postponed, is delayed.
Wasn’t in the script, now five goals to none.
“When we gonna wake-up?”
Arms are crossed, lips pursed, among Richmond fans.
Jack gets us on the board. In in the push-and-shove, Jacob Townsend fights out of his weight division.
Jason Castagna’s first goal gets us out of our seats.
Dave Astbury (pencil him in for ‘All Australian’) backs into space – a defender’s burden – and our boys are taking no short steps. The game’s intensity is not shirked.
Picking fingernails.
Lovely night for it.
Autumn’s equinox.
Such a fast and expansive contest, this game of ours.
Townsend still has ‘the touch’. Whole careers are built on ‘the touch’.
A Dylan Grimes punch to the boundary line late in the first – all is as it should be.
What are the patches on the back of the Carlton shorts?
“Are you born ambidextrous,” asks a boy sitting with his father in seats behind 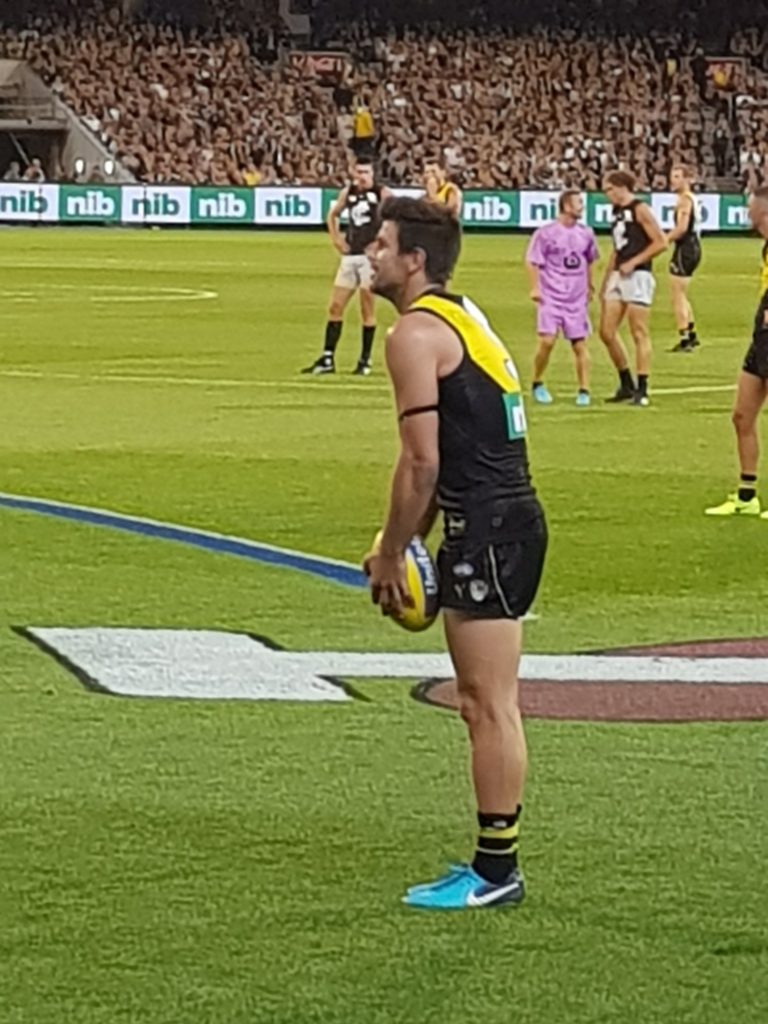 Cotch lines up for a shot that didn’t register. Photo by @aSpeedingCar

The day after, I posted a tweet.
I’d be encouraged if I were a Blues supporter.*
*the things you say when your team are white hot.^
^not so Richmondy anymore.

Sir James (@JamieVtron62) replied:
I’ve found myself patronising Blues supporters too. So wrong in many ways.

JD (@JD_RFC_TIGER) added:
It was a different sensation being 5 goals down but still feeling we had this.

Sarah Brook (@Brook23Sarah) added:
Ran into an acquaintance on the way out wearing a Blues scarf – had to put on my magnanimous hat – an uncommon experience!

Jack Soward (@jacksoward) added:
I was uncomfortably comfortable. I laughed when we fell 5 goals behind just at the combination of free kicks / a bit of luck / Blues taking chances. I could tell we missed Houli, Prestia and co. but never felt like we would lose. 2018 is so strange! 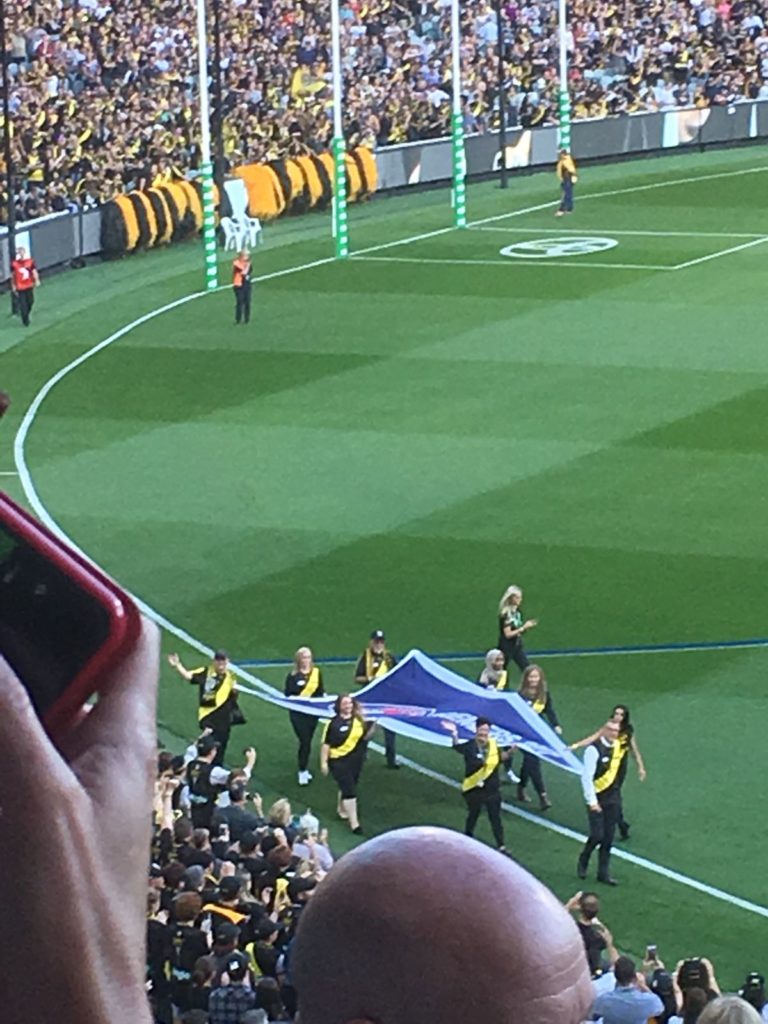 The 2017 Flag is carried around before the faithful. Photo by @Jennee_wren. 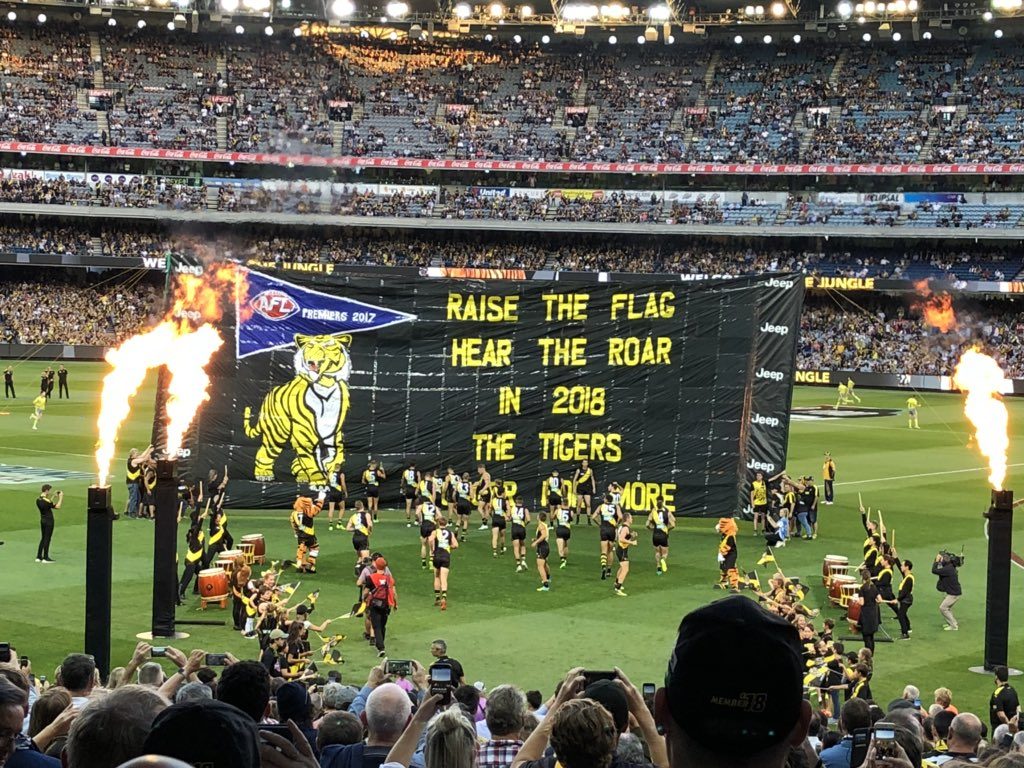 This season like no other begins as last year ended. With utter belief and confidence.

5 Dustin Martin – picked-up where he left off. Complacency? Nup.

3 Jack Graham – thirteen tackles. Six AFL games for Richmond, how many has he won? All of them.

1 Jacob Townsend – votes could have gone to Jack, Kamdyn, Dan Butler, Josh Caddy, Castagna, almost anybody, but one of the night’s highlights (apart from seeing Reece Conca back in it, and Shai Bolton’s standing leap) was the hard-at-it intensity of this bloke. Four goals caught the eye, but it was also him crashing into the contest, knocking blokes out of the way, opening spaces for others to run into. The fairytale continues.
▰▰▰▰▰▰▰