Its Sunday, its cold and rainy, and am I sitting by the heater with the radio on. My plan was to work while I listen but I am finding it impossible due to pre-game anxiety. I am just going in circles. I am actually feeling confident of a solid win and of the team gelling well, but also in the long run it will be to no avail. I did the ladder predictor earlier and it told me we would finish 9th below Essendon on percentage. Our percentage is worse than Hawthorn’s and they are 15th.

Embed from Getty Images
Its Sunday, its cold and rainy, and am I sitting by the heater with the radio on. My plan was to work while I listen but I am finding it impossible due to pre-game anxiety. I am just going in circles.

I am actually feeling confident of a solid win and of the team gelling well, but also in the long run it will be to no avail. I did the ladder predictor earlier and it told me we would finish 9th below Essendon on percentage. Our percentage is worse than Hawthorn’s and they are 15th.

I am delighted for Marbs that he’s been retained in the side. It will be good for Noah Balta to have a rest and – I am confident he’ll be a long term player at Richmond.

Terrible start. Junk 50 entries from us. Saints have stolen our game plan. Pinging it around. Ross does a little Dan Rioli-style pat to keep the flow going and it ends in a Josh Bruce running goal. Then two more to Acres and Marshall. We are in deep awfully quickly.

Sydney Staaaaaaaack!!! 7 stars have come back into this side and the one who has to kick start us is a 19-year-old. A fantastic screamer – sounds good on the radio but I have now seen it on Twitter. He lines up Hunter Clark from 15 metres away to be his stepladder. What a wonderful addition to Richmond he is. It is so right that we are the only club that would take him, because we are the club that can use him best in my opinion. 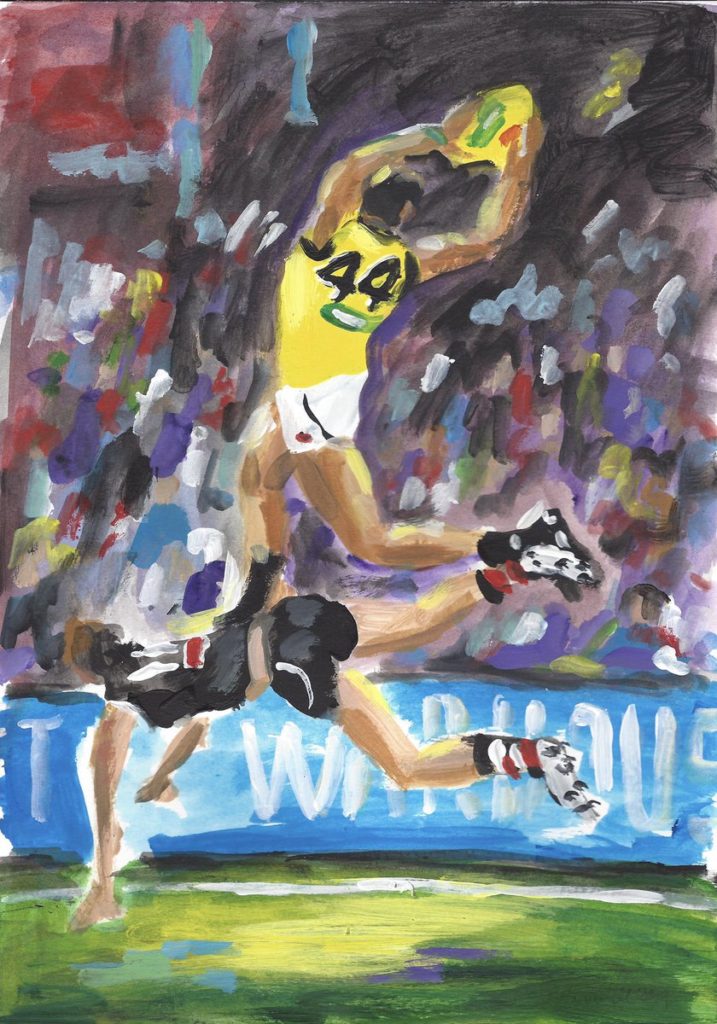 Sydney’s mark by the amazing Kate Birrell, painted back home from a photograph

And the ball got down to him thanks to a wonderful strong mark from Mabior Chol on the wing. He’s playing well, has great awareness and seems ready for this level.

Marbs! Marks and goals after leading out to Dusty, with three minutes left. A confident start from the South Sudanese Sensation.

Vlastuin is running and spreading, has six marks for the quarter. We are back in it at the break 18 – 12.

Kate’s plein air painting done on the spot, under the dome. Her work here on her site is worth a good look.

Stack goals again while am I making a sandwich, and Dion scores a behind to put us in front. And… breathe.

Then the Saints take control again, somehow getting their kicks in without much pressure from our midfield. Suddenly, from a point up we are 4 goals down in six minutes. I am feeling furious, disconnected and anxious sitting by the radio.

Goal to Bolton. Lynch brings it to ground in a pack and the little feller is front and centre and kicks straight.

It’s all happening too fast. I want it to slow down. Now I am looking over Marcus’ shoulder at his phone for the rest of the quarter. Marbs again! What a lovely left foot set shot he is.

Then Sydney out on 50 just within the boundary steps inside and sinks the goal from 45. Dusty is being given ages by the umps to get rid of it. It’s not really fair but I am not petitioning the AFL about it. The new no-mo Stack has 3 goals.

We go in four points down with no goals yet from the Anglo-Saxon contingent. The scoring has swung in big storm surges and I am feeling a bit seasick. Lambert is making a terrific return, 16 touches so far.

On ABC radio the half time chat with Brad Sewell and Parko is about Stack needing to build his tank to play midfield. Parko: “I hope he stays unfit so he keeps jumping on people’s heads like he does”.

We restart and its with Lynch who misses, and cops a serve from the radio team. “You never see him DEMANDING the ball” – Sewell.

Finally after a long wait a really good team chain of possessions ends with Lynch in the square, and he roosts it towards the roof. Great goal. Back in front, and into seventh on the live ladder which we all shouldn’t care about in June.

10 minutes after half time Sewell says “McIntosh had Lynch SCREAMING at him for a pass out wide and McIntosh turned back into the channel”. Yeah Brad, you are turning out to be a bit of a dickhead.

Dusty must have sensed the pressure Tom is under, because he took a risk to square it to him for the first goal of the 2nd half, when could have kicked it himself in his sleep.

Dan Rioli goals easily after great work from Martin and Graham and a shimmy from Sheds. Then Caddy adds another. Sydney had the chance there to destroy his opposite nº44 Wilkie but simply dispossessed him. We have a 14-point lead, the ship is steadying as we have kicked the last six.
Embed from Getty Images

At this point our old dog went berserk, because his best mate went past the back gate, and he NEEDED to get out there. So my idea of a walk with my head down listening to the rest of the game became instead a social walk with a dear (human) friend who has no interest in footy. But it was lovely to see the dogs play and my game-day anxiety just faded for the thirty minutes or so, until I excused myself to come back in and listen to the conclusion.

[Highlights I missed were: Ellis goal. Caddy delivery to Lynch. Amazing chain of possession with great evasive skills from Bolton and Castagna, George ends up slotting it from boundary on his left. Wonderful.]

When I get back the Sainters are starting to fray, and no-one nominates for the ruck, allowing Marbs to stroll in in and kick a very easy goal, his third.

We are easing in now to a comfortable win with some confidence-building goals to Chol and Lynch. Though having said that Marbs doesn’t seem lacking in confidence. And Sydney Stack – words fail me. He’s moved forward and kicked four. Could be anything. Could win the Brownlow, this year.

Since typing that I have looked at the official Brownlow vote predictor and S Stack is currently on zero votes.

In the Saints’ second half they kicked 3.10. If they had kicked straight they could have given us a serious fright. At times they looked a good match for us, and when they decided to play keepings-off we had no option but to occupy space and be patient.
Embed from Getty Images

Benny Votes
Dusty (5) was in classic form and had both the Saints and the men in green in his thrall.

Stack (4) had an amazing 15-touch game. Kicked four goals, was also a creative engine and a defensive menace in the front half. A revelation as a permanent forward.

Chol (3) kicked 3 goals in his third game, and did it all – forward, back and ruck, with aplomb.

Prestia (2) had 29 touches and carried a load, with both Edwards and Cotchin having quiet returns.

Vlastuin (1) had 26 touches and 11 marks and was a dead end for many St Kilda thrusts forward.
Leaderboard