A FIRST-HALF BLITZ AT DORKLANDS. They do try to create a sense of occasion, those folk at the Dorklands stadium, but, really, it’s a hopeless task. This barn has all the atmosphere of a 24-hour chemist shop, complete with flat lighting and garish advertising, including, strangely enough, many a chemist shop commercial blaring from those large screens. 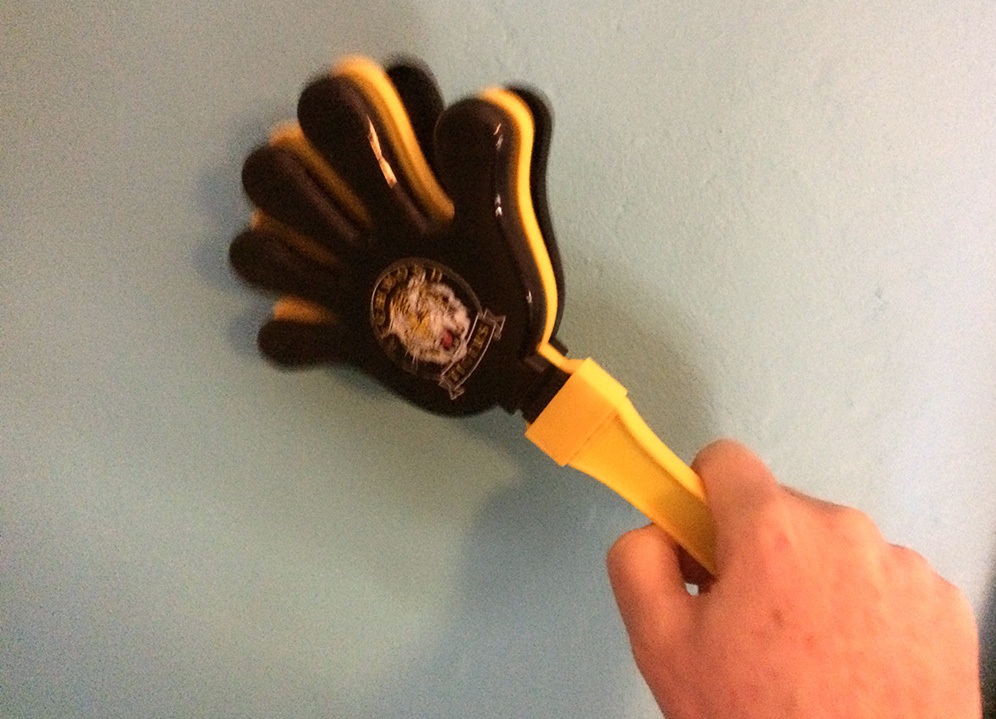 The clapper got a good work out in the first half of the game!

Embed from Getty Images
A FIRST-HALF BLITZ AT DORKLANDS

They do try to create a sense of occasion, those folk at the Dorklands stadium, but, really, it’s a hopeless task. This barn has all the atmosphere of a 24-hour chemist shop, complete with flat lighting and garish advertising, including, strangely enough, many a chemist shop commercial blaring from those large screens. (I’m sure I’m not the only person hankering nostalgically of that bygone era when the scoreboard was a big black box, inhabited by blokes in dustcoats opening and closing little hatches to arrange white painted numbers on bits of tin. Instead, we now have these monster televisions WITH THE SOUND ALWAYS TURNED UP TO ELEVEN.)

Anyway, after a whole lot of rigmarole with some poor bloke singing a song and playing his guitar alone in the middle of the paddock, and then some more guff where we were all encouraged to wave our mobile phones around in the dark, a football game eventually got underway. And it started well too, with one of the umpires being immediately bowled over in spectacular fashion by a stampede of leather hunters. I reckon that if you’re kitted out in a pea-green shirt and lime-green socks then, really, you’re asking for it. We all roared our appreciation of the moment.
Embed from Getty Images

Way up on the top deck, where they send general admission ticket holders at the Dorklands, I was surrounded by Saints fans bitching and lamenting in much the same manner as us Tiger supporters were obliged to do for so many years in the not-too-distant past. Watching St.Kilda players commit error after error, I did feel the occasional sympathetic twinge. As we know only too well, a footy season can feel like a Siberian odyssey when it’s still only mid-July and your team is playing that badly.
Embed from Getty Images

The advantage of the top deck vista is of course the ability to admire the spatial dynamics of the game. You can see how a good team can open the game up with a sharp diagonal kick that moves the ball forward but also creates space for teammates to run into. From this perspective, it’s easy to see one of the reasons that Dustin Martin is such a great player, regularly slicing the game open with sharp kicks across his body. Given that he’s working at ground level, without the perspective that I’m enjoying from the top deck, it’s amazing how he manages to do this so consistently. It’s a wondrous thing to behold. The other thing evident from high up is the remarkable endurance running of linking players like Prestia, Edwards and Lambert. They’re up and down, and across and back all evening, and the momentum maintained by Prestia especially in this match was fantastic.

Embed from Getty Images
Meanwhile, I’m feeling sympathy for Jason Castagna who, attempting to redeem himself after last week’s horror show in front of the goals, came no closer to getting one to sail between the big sticks this time around. So much of this difficult and demanding game plays out above the shoulders, with the difference between a champ and a chump being a matter of confidence and belief. On the up side, I was happy to see Cotch, Higgins and Grigg bring up the two flags, given their failure to do so in recent times. I’m sure Castangna’s personal drought will break before too long.

This game was largely done by half time. The Tigers were magnificent in the first two quarters, managing to score with great efficiency. Given our tendency to waste so many opportunities in the forward zone of recent weeks, this was great to see. By contrast, much of the second half of the game was a far less exciting affair. The ball zinged up and down the ground, but both teams turned it over regularly and highlights were harder to find. Many of us were hankering for the mercy rule in the final stanza, by which time all fizz had gone out of the contest. Junk time seemed to extend for at least twenty minutes and, at Dorklands, that somehow feels like an eternity.

5. Dion Prestia
Incredible running, coupled with an ability to trap the hard ball and then get it out into space. One of those players whose best work is so quick that it’s sometimes easy to miss. Kicked three goals too, as well as another one that didn’t count ‘cause of an annoying call from one of those pesky boundary umpires in the ridiculous green outfits.

4. Dustin Martin
Dusty was back to his tackle-busting, scythe-kicking best. Made a few errors, but these were more than off-set by several moments of sheer football genius.

3. Jayden Short
Provided terrific run all night long, and executed many a beautiful, raking drop punt. Always seemed to pop up as one of the links in our most spectacular passages of play. (No goals this week but is he a back man after all, so we really can’t expect him to kick ‘em every week.)

2. Toby Nankervis
Fantastic mobility around the ground, ceaseless endeavour and quite a few surprising moments where he exhibited the agility of a man half his size.

1. Jack Riewoldt
Amazing athleticism and selfless team play, punctuated by four sausage rolls off his own boot.
Notable mentions to the rest of the backline (Grimes, Rance, Astbury, Vlaustin and Broad), all of whom performed glorious and courageous acts.