A scorcher in April, for Hawthorn’s latest failed visit to our turf.

I am on foot weaving my way through the back streets of Richmond. The car park is officially full so in order to make it for the first bounce we had little choice but to dump the car in a two hour space and take our chances. I am returning to the ‘G’ for the first time since that wonderful drought breaking day, part of me doesn’t want to go back. Like a holiday destination where the memories are so good, so pure you make a conscious decision to never return for fear of the second time around never living up to the first.

It’s hot, real hot for April in Melbourne. The sun has the same intensity of Prelim Final day… there I go again, referencing the good old days just as my father has done before me. In football terms to be nostalgic is to be in a position of privilege. 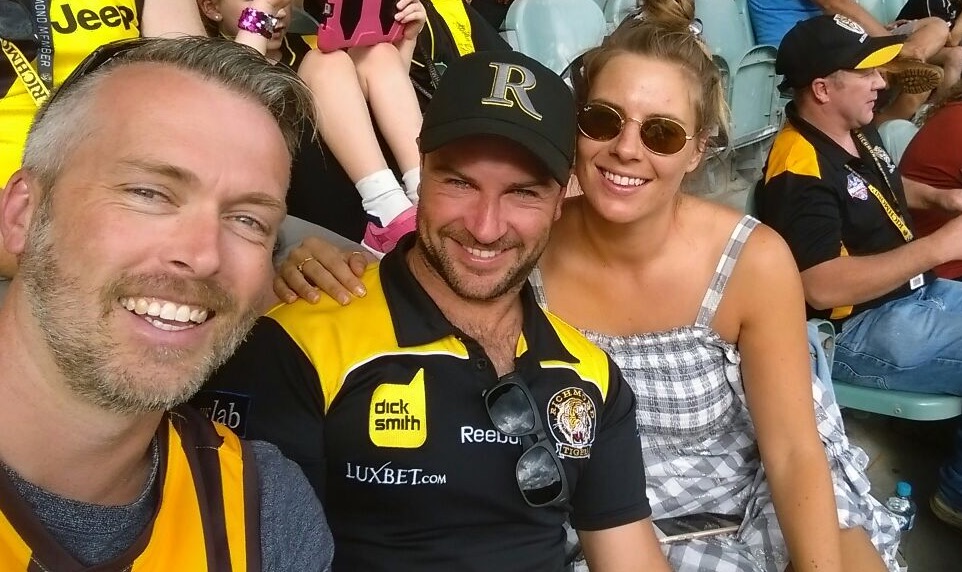 The umpires are not going to go quietly today, they pay two 50 metre penalties that from my vantage point on level two of the southern stand looked questionable. I wish they’d put the bloody whistles away.

The ball is pinging between the arcs, both backlines are super organised with neither team able to make the most of their forward thrusts.

My goodness Shedwards looks dangerous early, the better we have got, the better he has got. The bloke sees things two steps ahead of most others on the ground. I give my sister a nudge, “your boy is looking sharp.” She says she is modelling her game on him. I feel she has a way to go.

Hardwick, of the brown and gold variety, bursts through the centre, only Cotch stands in his way from a shot on goal. His ‘single arm’ tackle effort is so out of character most tiger fans in my neck of the woods turn to each other with furrowed brows. Hardwick misses, no harm is done.

We are handball happy early happy to take any option; a metre handball, a ten metre chipping kick. Our boys surge forward and run in waves but can’t quite find the synchronicity they need for an open avenue to goal. A fellow tiger behind me screams for us to kick it long, I take the bait. “Mate this won us a premiership so just (insert explicative) accept it.” It’s a cagey game at the moment, a chess battle, the two coaches know each other well. I can’t help but think their fingerprints are all over the opening fifteen minutes.

I am pleased with our composure, we are patient and errors by hand, foot or mind don’t seem to reduce our desire to take the game on. This a substantial shift in belief and mindset from so many tiger teams that have come before. For the time being our boys play in a headspace where the fear of failure has been tamed. That makes us a seriously dangerous football team.
Early on everything the bloke wearing the number four turns to gold, from 2017 to today it seems nothing has changed. By quarters end we have five individual goal kickers and a 17 point lead.

Early on in the second term something remarkable happens, George kicks a goal with his hand. Eventually the review system gets it right and correctly awards us a point but it serves as a moment when you can’t help but question the validity of technology in football.
It’s mid way through the second term and it feels like we are beginning to bust the game open with our spread from the contest. Just as the game begins to open up so too did the sky with the April sun finally working it’s way over the back of the Olympic stand to bath us in sunshine. It was hot, real hot. The only sensible thing to do was begin to the let the Great Northerns flow.

In an immediate response to our scoreboard Poppy from Hawthorn slots a goal. It would become a pattern for the afternoon. Far too often we goaled and gave up an easy one almost immediately. 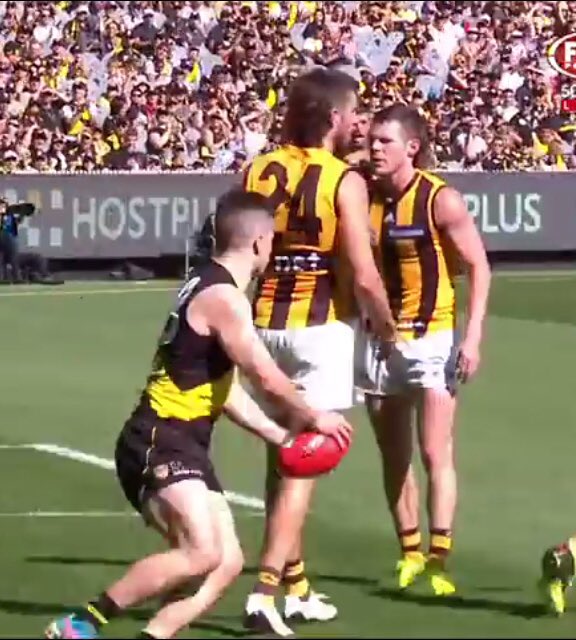 Heh hey Blake these haircuts are hilarious as long as we don’t both both fail to hear the ump call ‘play on’ and let a first gamer kick a goal on us while we stand around like badly-dressed cavemen who are dumber than rocks. [thanks for the pic @ReeveMcLennan]

Enter my favourite passage of play for the game. Dusty chips to George, George on the arc knows the distance is beyond him and handballs back to Dusty. Dusty never gets balanced and his shot on goal comes off Hawthorn hands. The debutant ‘Higgo’ claims the mark, he realises it’s touched, plays on and wheels around to snap the ball truly. He joins the first kick, first goal club and celebrates accordingly, running down the forward pocket with his arms held high over his head. It’s a celebration KB would be proud of. Then true to the pattern of the game Poppy kicked another and cancelled our goal out.

Astbury stops another Hawthorn attack. It’s a moment to recognise how good he has become. With Rance, Vlaustin, Houli and Dave we now have some serious talent in intercepting.

I bolt back up the southern stand stairs with a beer in hand. I sit down and the umpire slams the sherrin into the turf, my timing was impeccable. My brother in law plonks himself down next to me. He is sporting a 2013 Hawthorn premiership jumper. I am no longer envious of his guernsey I now have the equivalent for myself. In a break in play he leans across. “The tiger fans are getting cheeky, one lady on the way back up told me I would need more beer.” I no longer hope she is right, I feel she is. That is a significant shift.

Early in the third the Hawks are clearly on top, clouds bring some respite from the heat. For the first time I feel a little nervous.

Goals to Riewoldt and Grigg restore order, I scream “C’mon the Premier”, just because I can.

At the 18 minute mark there is an audacious passage of play that represents everything I love about the current incarnation of Richmond. If you haven’t seen it, I urge you to go to the tape and find it. It’s a series of flicks, touches and team work that would make the Harlem Globetrotters proud. In line with this style of play Higgo volleys one out of the air to put us 34 point up. He has taken no time to find the pace of the game. In the words of Hardwick, “the recruiting team keep picking them so I have to keep playing them.” It is a wonderful problem to have.

I am confident, so much so I begin to plan my late lunch in Swan St. Hawthorn kick three on the trot and the Hawthorn cheer squad are working overtime. I note their flag policy. It seems at Waverley they have opted to go for size not quantity.

A string of handballs is finished by a Butler back heel. It is surge football at it’s best. It’s another passage of play with deft touches and team cohesion that perfectly reflects the current day Tigers. There is little resemblance to our teams of yesteryear. These Tigers are unique, I smile with pride.

At the 16 minute mark I am frustrated. It seems we still haven’t worked out the Poppy is knee high to a grasshopper. Lloyd rips his head off and Poppy makes us pay. The difference is now 20 points.

The final five minutes is painful, the result felt inevitable but we made it far closer and nervy then it needed to be. The coach said we lacked composure, I thought we had one eye on the clock and put the cue in the rack.

Post match Jack says its best, “this is our cauldron, this is our home ground.” We are now 10 games undefeated at the ‘G’ dating back to round 13 last year. We make the pilgrimage back to Swan St, for some reason it is open to traffic. I thought from last September onwards it got shutdown after every big Tigers win. Maybe next time

The votes:
5 Cotchin – If there was a coal face he was at it, time and time again on he started the Tiger engine.
4 Conca – Amassed touches, had excellent centre square positioning and some vital centre breaks
3 Edwards – Oozes class, was instrumental early when the game was taking shape.
2 Short – Took the game on early with his run and carry from the back half. This set the tone for others such as Ellis and Houli to do the same as the game wore on.
1 Rance – The bloke is a God. If not for the number four he would be the best I’ve ever seen wear the jumper.
Honourable mentions: Nank and Jack. My goodness they are important to us. They battle manfully every week with very little tall timber to support them. God give them strength.

Editor’s note: here is a blast from the past – solid TTBB supporter JD at the footy with son Noah, 2014, from our first season of the ‘new’ TTBB. 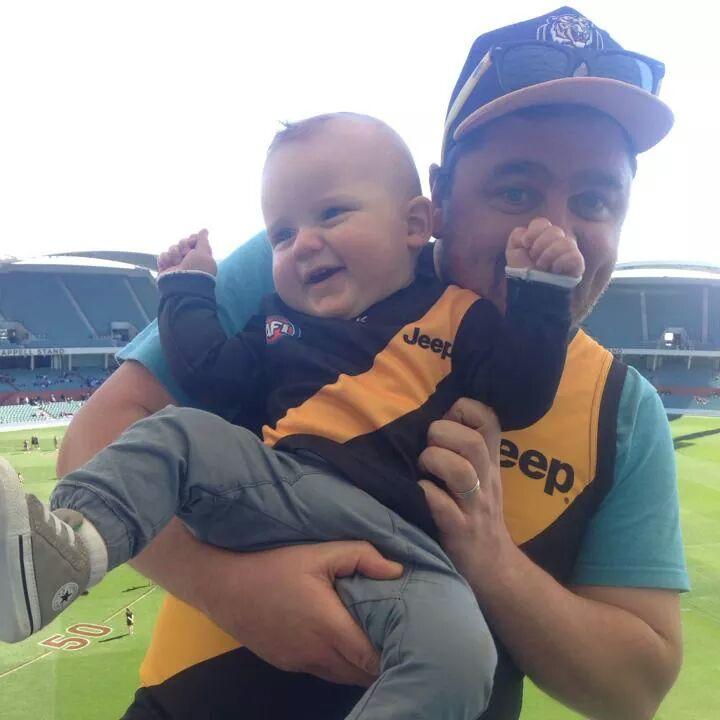 And here’s Noah at the G yesterday! Always great to see the TTBB family grow up! 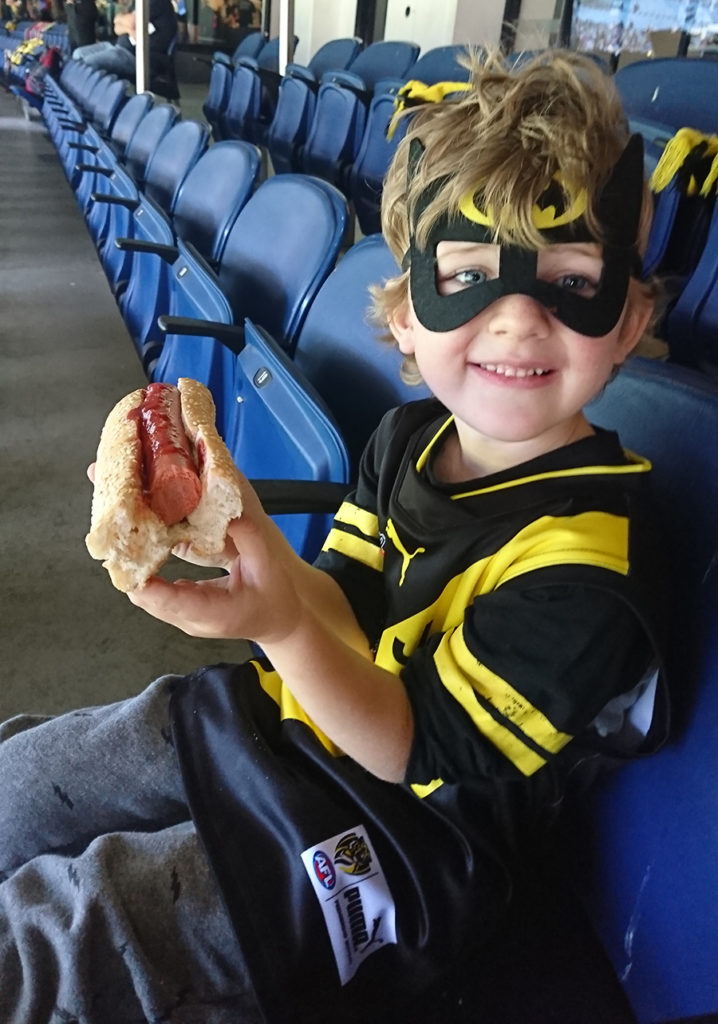