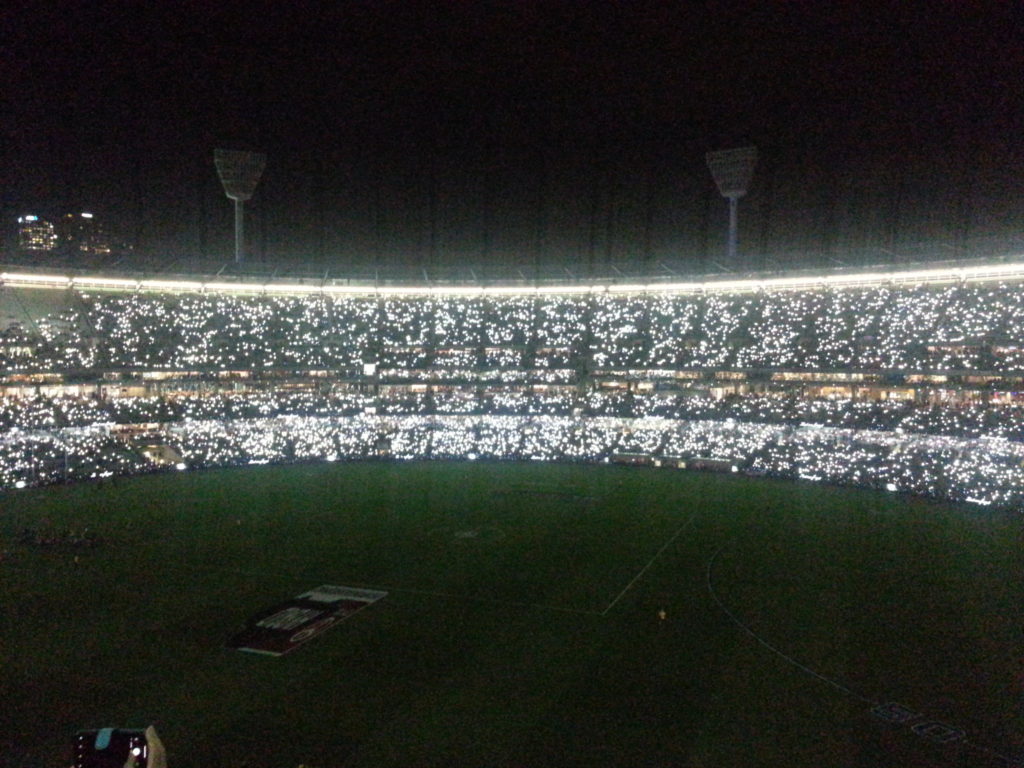 This was my first time to one of these showcase ANZAC Eve matches. I’m quite leery about sport trying to equate itself to actual war, but am pleased to report it all seemed respectful and not particularly over the top. It is a little odd to be approaching the MCG for a night game, and not seeing the light towers lit up, but the atmosphere was certainly there – especially when proceedings got under way and much of the interior lighting was doused as well.

This is when I discovered that I don’t actually know where to find the torch on my phone (I have a very hands-off relationship with my phone, clearly) but it certainly looked nice seeing the thousands of lights from everybody else’s. The only problem with the atmospheric lighting, really, was being unable to properly see the members of the Creswick Light Horse taking part in the brief ceremony. They look great on telly though.

The first quarter seemed like a bit of an arm-wrestle, with Melbourne definitely taking us on. Jack Riewoldt was valiant as per usual, taking a couple of marks under heavy pressure, but unable to convert them into goals. Our backs were likewise valiant, Alex Rance in goal-keeper mode, diving goal-saves included. It was a bit of a relief to go into the break 3 points up.

My usual good timing mojo was off somehow ‘cos I missed the first 12 minutes of the second quarter by being stuck in a queue, but very satisfyingly found we were another 14 points along by that stage while Melbourne were still stuck where I’d left them. Defensive players again stood out for me – more sliding Rance and David Astbury making sure we went into half time with a comfy 20 point lead.

Score review early in the third quarter made me realise the wingtips of the Great Southern Stand obscure the screens to both left and right of where I was sitting in Q section. Arcs of metal thrusting precisely over the all-important footage we’re supposed to be scrutinising. Oh well, I’ll just have to trust them.

There was a black patch where Melbourne put on pressure and goals. They knocked our lead down. We clawed it back out again. It was a long quarter.

Early in the final quarter I wondered if it might all end in another arm-wrestle as it started, but then we just blazed away, pulling out 4 goals in a row at one point, and just kept going. I had a moment of sitting back and thinking “How good is Dylan Grimes?” and another of thinking “Trent Cotchin is a magic bastard”, and the final sentence I wrote in my notes says “Putting away notepad now and just enjoying”.