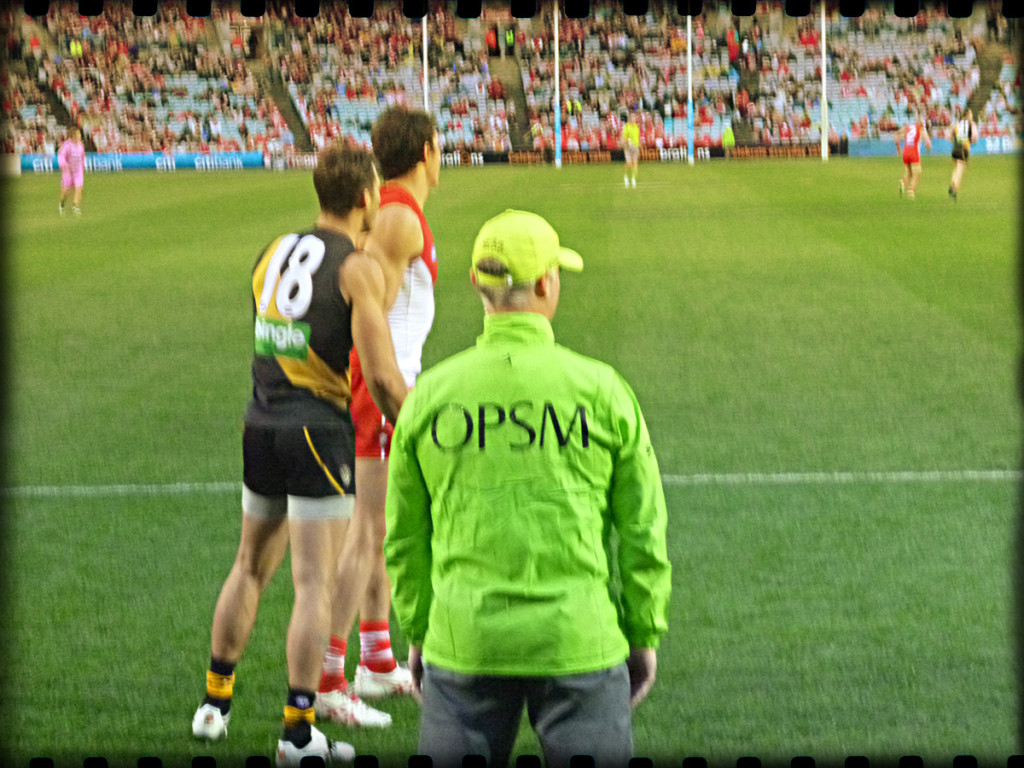 Alex Rance wearing Kurt Tippett like a big expensive glove. We sat dead centre 4 rows back from the fence.

After Dusty ran away from a prone Ted Richards and put us out by 9 points, then the Swans replied, a fella in front of us in the cheer squad said “Two minutes”. He was in touch with someone in front of a telly with the benefit of the countdown clock – I took this as gospel.

But then shortly afterwards someone behind said (with a voice of authority) “3 minutes 15 to go”. One minute later someone else said “3 minutes 25”. Chrrrrrrist. Were were three points up and absorbing incredible waves of pressure – Rance, Chaplin and Griffiths intercepting a lot of poorly directed wish kicks. The tension was pretty incredible.

Marcus on banner duty – he’s in the centre of shot, yellow shirt. A great day for a great Tiger, Chris “Newy” Newman.

It was our first live game of the year.  Our family is divided into two Tigers (Marcus and I) and two Don’t Get Its (Elf and Michael). They stayed home and we flew to Sydney. Dugald made some introductions and David Ward offered us a space in the cheer squad, and a chance to go out on the ground with the run-through banner.

We arrived a little late but David had been looking out for us. One of the Squad (Nick I think) offered Marcus his wristband to go onto the ground with the banner, and I stayed behind the fence and took photos. David and the whole squad were so welcoming and helpful, they really made sure our night was memorable and great fun, win or lose. I had brought a yellow Richmond flag and a folding tent pole to wave it. The elastic in it broke when I whacked in on the concrete in high anxiety during the last quarter. But still, my flag shows up on the footage amongst the others that were mostly black. The Squad (much sparser than it would be at home) gave Marcus one of these big flags to join in with.

Mick Molloy came and stood next to me for a photo opportunity with the squad (not with me personally I assume although I am quite handsome) and then sculled a beer, in the dry area. I asked him if he’d got any sleep yet and he said no. Also he announced too that he had a “good feeling” about the game.

We were next to Rhonda and Ryan from Warranwood. They are regulars in the squad and knew the chants, which took us a little while to get on top of. Rhonda had a typed-up team list and scoresheet, but only for one team of course.

I met up with Sean from Richmond blog The Audacity of Hype – a lovely bloke online and offline.

The game started like a dream, after a five minute settling-in period. As we kicked the fifth, I forgot where I was and actually thought for a second I was watching a replay of one of the earlier goals. I need to get to more live games, clearly.

The Squad were of course howling at the umps, and we were certainly on the end of few shockers. But I thought Rance was monstering Tippett and very lucky to not give away a bunch of frees inside 50. When I heard on the train to the ground that Buddy was out, I thought that was an odd choice, given they had a debutant ruckman and Tippett would probably need to help him out. Essentially the Swans didn’t come to play, and if they were undermanned that was largely by choice. Ivan ruled the first quarter, giving young Naismith a clinic.

There were no goals in the first 6 minutes. Subtract the next nine minutes of the game and we lost every quarter. So – how did it feel? Stressful, but in a different way to earlier this year or even last year. I genuinely think this group has got a new set of tools to bring to the job now. I knew we would go behind at some stage. But I also felt that as long as there was at least 30 seconds on the clock when it happened, that we now have the skills and confidence to fight back and win, like the song says. And as soon as Lids put us back in front before 3QT I had a feeling inside that we’d prevail.

Our defence was marvellous. At one point in the first Q Maric, Houli and Grimes flicked a wet ball in a triangle around a couple of Swans like Geelong of a few years back – never quite losing control, until they found a way out. Rance played one of those dominant backmans games that has pundits re-working their All-Australian predictions. Chaplin is a new man – his confidence is right up. Did you see his little sidestep in the first Q? Dances sideways, ball slips straight out of his hands like a cake of soap, but he just got down and gathered and dished off like it was all part of his plan.

I think the Swans kicked the game away in the last Q. We were not blameless in that area but their 5 behinds, all resulted in kick-ins to the very same spot, right back pocket boundary on 50. I think each kick in was a turnover, often out on the full. This was the hardest part – seeing the boys struggling to execute what they had clearly been instructed to do, the Malthouse plan of going via the cape. By today’s papers Sydney are apparently feeling like it was a jolly top night all round and good for football; but Longmire seemed to me to be having some genuine conniptions about their failure to put away a spirited but inferior team. A beautiful moment that happened right in front of us; Malceski took a kickout with Teddy right there telling him to go up the guts. Malceski went wide right instead and kicked it straight to: Alex Rance, a man who stays fresh for up to 2 weeks inside a Décor plastic container.

Pandemonium. Brought to you by Pain Away.

I love the goofy face of Dylan Grimes after a win. Marcus got down to the fence and managed to backslap a dozen players as they gave out signed balls and soaked up the Tiger love. We sang the song and chanted the chants a dozen times each. I’d had a tense chat to Trout at half time, but at the end we exchanged half-hugs. On our way out I saw Cassandra and had a quick chat to her as well – the joy all around us was palpable. Marcus and I went to a burger place outside the ground and just flopped down and grinned and grinned at each other. I was hungry and exhausted, it was dark, it was after a footy game – my body told me it was at least 11pm. In fact it was just after seven.

I saw great things last night from Maric, Rance, Deledio, Riewoldt, Foley, Cotchin, Chaplin, Griffiths, Grimes and Edwards. I didn’t get a great look at the midfield because of where we sat. I saw good things at times from everyone including Petterd but it sounds like he may be one to miss out if a change is made. I am so pumped for the finals – I really believe we belong there in a way I didn’t think was possible just 4 weeks ago.