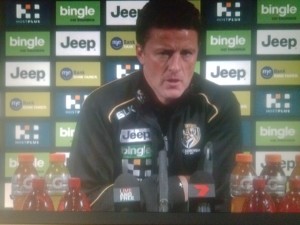 Damien Hardwick, team jacket on, strode boldly into the press-room. He was relieved at having seen his team overcome the tough and never-say-die North Melbourne Kangaroos by 10 points. The Club’s membership was at a record 70,000 (admittedly, many of them only three-game members) and about 3,000 of them had come to Hobart for the game. The game had been a cracker played to a sell-out crowd. The Tiger fans are up-and-about and the game is healthier for it. The AFL are really pleased that they have given prime-spots to Richmond in this season, “the year of the fan”.

Journalist #1: Well, Dimma. That was a great win. What was the most pleasing aspect of it?

Dimma: I tell you, North are a great side. We had to be at our best today to not only stick with them, but to win the hardball when it was there to be won. Injuries took their toll on them: Waite and Nahas going down – that really cruelled them. I tell you, for a moment there, I was regretting we let Nahas go and weren’t able to attract Waite to our team.

Journalist #2: That is all about North. What about, your guys? What was the most pleasing aspect of the way your players played?

Dimma: Dustin Martin stuck to the structure all day long. He kicked the ball exactly where I told him to. Griffiths really stood up. Clunked some marks and nailed the goals. I was also impressed with the way big Ivan was able to cover the ground – took some real important defensive marks, and that mark, late in the last quarter when he drifted forward and marked in front of Farrito to effectively seal the game was a moment Richmond fans will never forget. 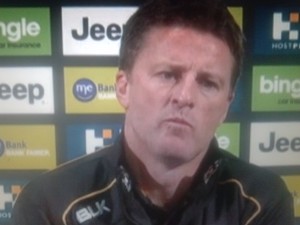 Journalist #3: You’re sitting 4:2 now and are 4th on the ladder thanks to your healthy percentage. Are you starting to raise the bar on what you can achieve this season?

Dimma: We haven’t achieved anything yet. We’re only six rounds in. We’ve got Collingwood next week. Sure, they got tidied up by the Cats on Friday, but we’ve got no doubt they’ll come out firing this week. It is going to be a great contest and one that we look forward to. If we’re good enough, we’ll be able to take it to them.

Journalist #4: What did you make of Deledio’s performance? He seemed to have slipped straight back into the team after a month off with the calf?

Dimma: He actually didn’t have an injury. We just gave him some long-service leave. He’s played with us for ten or so seasons now, and barely been injured or suspended. We thought that he needed break. Plus, we wanted to see if we could win without him. It turns out, we’ve done relatively well over the past month, going 3:1 – having just dropped that game to the Bulldogs, who are justifiably premiership favourites.

Journalist #5: Cotchin has gone into the book for a late hit on Brent Harvey. What did you make of the incident?

Dimma: I didn’t see it. The one thing I will say about our captain is that he stands up for his team-mates. In virtually every game against North, Harvey has torn us a new one, over the past decade. Normally it is Dan Jackson’s job to attempt to take out Harvey behind play, but he selfishly retired last season to get on with his life and do something else other than kick an oval ball around a large field day-in-day-out.

Journalist #5: You mean to say, that you gave instructions to Cotch to take Harvey out?

Dimma: You’ve had your turn. 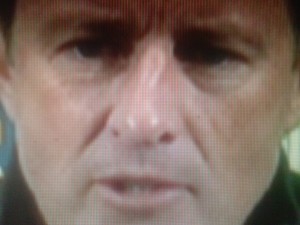 Journalist #6: Just picking up on Cotch, what do you think of Chris Rees’s comments on TTBB regarding his habit of all those short, barely 15meter kicks?

Dimma: Chris Rees? I’ve got one of his mugs. Cotch always bangs it up the guts and always hits a player bang on the chest. Don’t know what he’s on about. He should stick to making mugs and t-shirts.

Dimma: Same as with #5. You’ve had your go. And by the way that is not a question.

Journalist #7: Can you give us an update on Alex Rance’s contract. Is the Club making progress with his management?

Dimma: Alex Rance is a very important part of our team. He is tall, good looking and has wonderful musculature. He makes up for some of the shabbier members of the team, that is for sure. Alex Rance is intelligent, humorous and courageous. He’s got other things in his life other than footy. The world is his oyster.

Journalist #8: Sounds almost like you think he wouldn’t be losing much by leaving.

Dimma: Reverse psychology, mate. Heard of it? We need him. WE NEED YOU ALEX. And we need you too, Chappy. Don’t get any ideas about going back to Port – just because now they have the most beautiful ground in the comp and have got a proper jumper. STAY WITH US. WE’RE GOING PLACES. FAST. 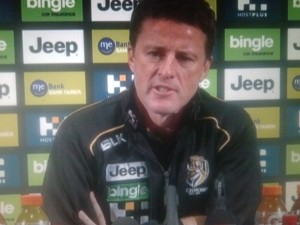 Dimma: Bloody long press conference this one. Don’t you guys have a plane to catch?

Dimma: What at the ground?

Dimma: What’s that? Never heard of it.

Journalist #9: Forget it. Dimma, you guys have made a lot of progress since losing that elimination final against the Blues. When you see them in the position that they’re in now, do you have any pity for them?

Dimma: It is a very even season. Make no mistake about it, we could easily be sitting 2:4 at this stage. If we’re off by 5%, 10% or 50% we know that we’ll lose a game. We have to get better each game. We know that our best is good enough to beat any team. We also know that any other team’s best is good enough to beat any other team. We’re no different. The Blues? They’re a great team. They have a great coach who the whole football fraternity loves and adores like a dear-old beloved grandfather. He’s kind of like footy’s answer to Kurt Vonnegut; bringing laughter and philosophical insight at the same time.

Journalist #10: The Tiger Army. It must be a great feeling having them on board.

Dimma: I’m not sure if I can call them an army. They don’t bring weapons to the ground nor do they wear helmets. Our colours are Yellow and Black; soldiers dress in dark green, khaki…But, I get your point. They’re proud, passionate and paid-up. We’ve got their money. We’re paying back their loyalty one week at a time – or, in four week blocks, if you will. We know that they’d still be behind us if we were 2:4. This game can turn very quickly. It’s a very even competition. Evenly.

Journalist #11: Dimma, just one final one…

Dimma: Nup. I’m cooked. I’m outta here. Thanks you blokes. See you next week after we smash the Pies in front of 90,000. 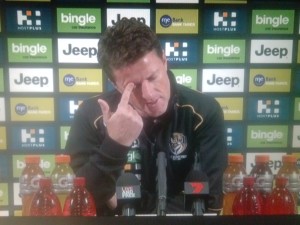