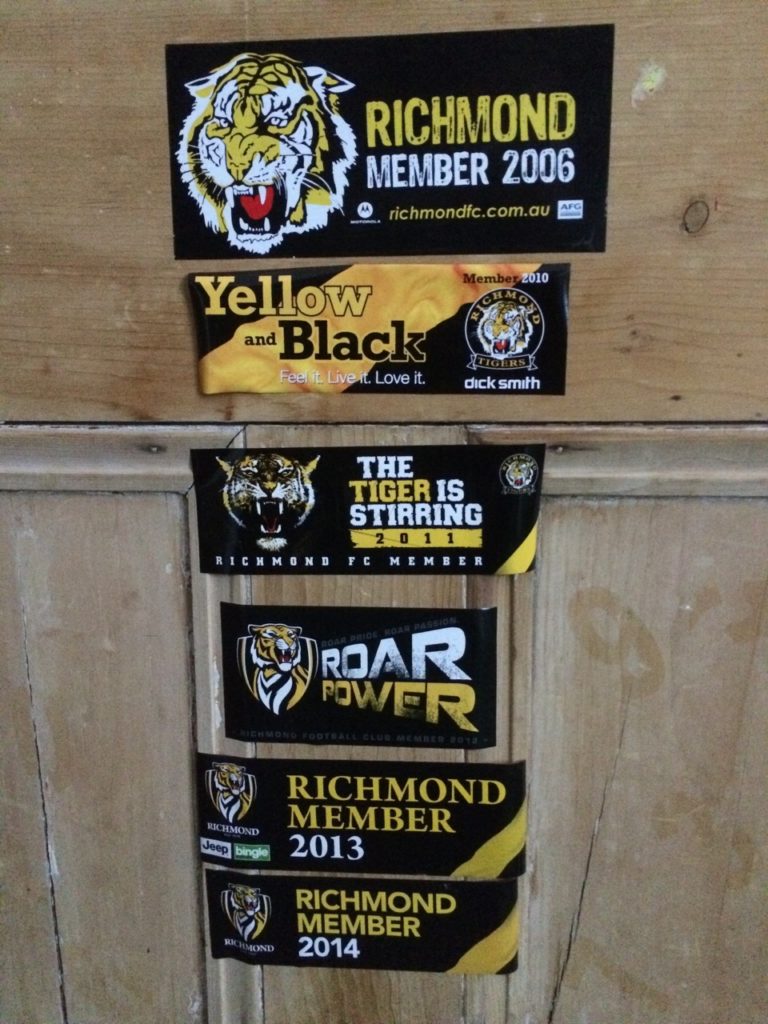 I don’t claim to be a world expert on parenting, but I’m pleased that I’ve brought up my son Otto to be emotionally resilient and prepared for the inevitable vicissitudes of life. For one thing, I made him listen to a lot of country music throughout his formative years. He’s learned that many things – especially affairs of the heart – tend to start well but end badly. As well, I insisted that he align himself with the Richmond Football Club. That’s just the way thing are at our place – football club allegiance is something you inherit, not something you get to choose on the basis of a personal childish whim. And, fortunately for all of us in the tribe of yellow-and-black, following the Tigers has turned out to be a richly rewarding, character building experience. We’ve learned never to build up unrealistic expectations. We’ve developed a philosophical attitude towards the disappointments that life inevitably throws in our path. We’ve learned to delight in the absurdities of near misses, where defeat is miraculously plucked from the teeth of victory. We understand the meaning of exquisite pain, the pleasure of returning again and again to pick around the same old scab. We appreciate the virtues of righteous suffering. (“Haven’t we suffered enough?” Otto occasionally asks me. “Apparently not” I wisely reply.) We’ve developed perspective, attitude and ironic capacity that those pitiable Hawthorn supporters, for example – those soft-bellied, fair-weather sailing turd-bird devotees – will never truly understand.

Cycling home from Saturday’s game against the Swans, we ruminated yet again on our team’s wonderful capacity for heartbreak. I suggest that overall, we were probably the better team on the day. Otto responds that, were that truly the case, we would have won the game. It’s a delightful conundrum.

I can’t remember who it was that once referred to Richo, our one great shining light throughout so many otherwise forlorn seasons, as the Hamlet of Australian football – immensely gifted but, somehow, forever shrinking from greatness. I always liked that description and thought it to be true and insightful. This year, it seems to me that our whole team has taken on the Hamlet mantle. But for a few fatal character flaws that have seen us lose four games by a combined total of nineteen points, we could be sitting a couple of games clear on top of the ladder. Instead, the inevitable logic of tragic drama sees us sitting several rungs down the table.

The Tiges played some exciting footy at the MCG on Saturday and then, just a few times too often, one of our blokes would make a clumsy skill error and turn the ball over in a dangerous part of the ground. The Swans kept plodding away in a boring, annoying and persistent manner, exploiting the chinks in our armour. They had too many tedious players with boring names like Jones, Smith, Lloyd and Newman. I didn’t like any of ‘em. Meanwhile, Sir Rancelot was clearly the most splendid player on the park, rendering that big bloke that we passed over in the 2004 draft as a misfiring pop-gun. Our other tall soldiers down back were similarly magnificent – David Astbury showing off his fly-paper hands and Dylan Grimes his Inspector Gadget extendable arms to great effect. Will-o’-the-wisp Shai Bolton was sublime for the first half of the game but then seemed to evaporate entirely in the second. Captain Trent’s hairstyle was immaculate and unmoving and Dusty’s tatts were as impressive as ever, but neither player managed to break the game open in the manner that we hoped they might. Bachar’s beard swooped hither and thither, but his raking left foot didn’t always work to great effect. Players like Short were courageous but, alas, often just too short. Our boys produced many moments of lightning-fast magic, but somehow never enough. I might well compare this game to a bitter-sweet country song but, really, it was more like a C&W oratorio.

Otto is now seventeen-years-old and, quite naturally, increasingly independent and resistant to parental direction. At some point around the beginning of the footy season I asked him to do some chore or other around the house. He replied that the chances of this happening were perhaps only slightly greater than finding a solution to the problem of global warming. Or to Richmond winning the premiership. Furthermore, he said, on the overall table of probability the Tiges saluting in September seemed to be the least likely of these events. Which, depending on how you look at it, might be an observation that’s tragically sublime. Or, alternatively, perhaps it’s simply tragic…