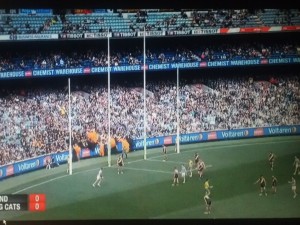 Preamble:
Mr.Hardwick regarded last week’s performance against Melbourne as insipid. Would this week’s performance be any better? It has been a long time since the Tigers have beaten the Cats. There is a worrying feeling amongst Richmond fans that after several years on the slow-improve, the team has now reached a lowly plateau. Player watch: under-pressure, under-achieving forward, Ty Vickery has come back into the team; Corey Ellis makes his debut, Trent Cotchin – somewhat questioned captain, in the eyes of some, needs to be more aggressive and assertive. And, Shane Edwards, Richmond’s best player of the season.

The First
The quarter ends goalless for Richmond. In the past against Geelong this could mean that they would have been at least 40 points behind. But, instead, the margin is only nine points. The delivery into the front-50 has been very disappointing from Richmond. The best and clearest opportunity for a mark close to goal was spoiled by Vickery; this was his low-light of the quarter. Riewoldt has taken a couple of good marks up on the wing; he laid a good tackle in the forward line that resulted in Miles having a shot which hit the post. Corey Ellis had a couple of kicks, one for a point the other for an out-of-bounds. These came late in the quarter and would have proved very handy for the Tiges. The narrow margin indicates not so much how Richmond have improved but how the Mighty have fallen. The Tiges’ structure has become a fraction more solid with the return of Chaplin and Newman. Houli has linked up with Martin a couple of times, coming out of defence. The holding the rule has been both fairly and unfairly applied – by different umpires, of course. Upside: only nine points in it. Downside: haven’t kicked a goal. Jack and Ty not looking like they’re cooperating. Hopes for the second quarter: at least go goal-for-goal with the Cats. Ideally kick four goals to at least show that they can run and work together. 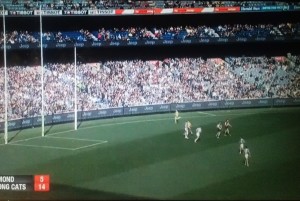 The Second
The first 10 minutes of the quarter were positive: the Tiges had managed to get the lead back to two points. There were moments when the game suddenly seemed open for the Tiges; they ran and created. Geelong were stalling. And then, the Cats kicked the next four goals to get the lead to 28points. Vickery and Corey Ellis were as good as unsighted. Lennon took a good mark deep in the left-forward pocket but wasn’t able to convert it into a goal or pass it successfully. Morris did little. Brandon Ellis who was lively in the first quarter was also as good as absent. Houli and Martin linked up on a couple of occasions. Edwards got the ball, but was ineffective in his disposal – except for the goal that was largely a result of a Geelong mistake. 28points is a large margin given how difficult it has been for the Tiges to score. Upside: The Tiges are playing very poorly, let’s hope it doesn’t get worse. Downside: Geelong aren’t playing brilliantly, but have a winning lead. Hopes for the third quarter: to get the margin back to 12-16 points. The game still needs to be alive going into the last quarter, otherwise the fans may well leave. I could be wrong but the Tigers players who are standing up are Vlastuin, Houli and Maric. 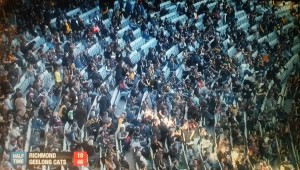 The Third
Again, the Tigers start with relative zip. They look like they want to play well and tough. But my only conclusion is that I don’t think there is a single team that fears the toughness of Richmond. Cotchin plays well; gets a lot of the ball and scores a goal and misses the captain’s goal that would have brought the game within 14points – my ideal margin. There are moments of proper football; a centre break that leads to a goal. A lucky goal from a lucky bounce (Cotchin’s) and Houli’s poise. Selwood gives a freekick away; something I think I’ve never seen before in a Richmond-Geelong game. There are moments of spite. This quarter has been a stalemate; neither Geelong nor Richmond would be properly satisfied. Richmond was perhaps the better team, but have only managed to bring the margin back a little. Over their past seven quarters, Richmond has scored 12 goals. Now, they must outscore Geelong by four goals if they are going to win it. Upside: despite playing poorly, they are still, still in it. Downside: neutrals would have turned off five minutes into the first quarter. Reality check: If Richmond win it from here it will be a great turnaround. If not, the fans will be angry and justifiably angry. This Club is lacking some passion at the moment. Vlastuin, Houli, Cotchin playing well. Edwards too. Vickery has gone out of the game. Riewoldt has been there-abouts. All need to lift.

The Last
It is already past midnight and I’m not sure how long I can hang on for. Geelong have kicked the opening goal and it feels like it is as good as over. I skip forward about ten minutes. Corey Ellis kicks a goal and then, it is Miles who gets another after being taken high. Miles plays decently and toughly. The Tiges have left their run too late. Their hunger for the contest, again, too late. A spectacular win could have eventuated if the players had more polish. The nine point defeat is not honourable; this is a game that the Tiges should have won to prove that they are improving. Upside: None. No major injuries? Downside: 2:3. Reality check: likely to be 2:7 after the next four games. 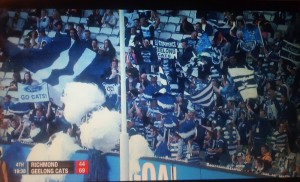 Post-amble:
The heat should now be well and truly placed on the coaching staff. During the last minute or so Richmond had a chance to get the margin to within a goal, but couldn’t do so. The coverage showed the Richmond coaches’ box and all looked mute and stunned, as if they had already accepted the fact that the team was going to lose. It seems as if the team has run out of ideas about how to play and they have lost enthusiasm. The Club has a very healthy membership and supporter base, but, the passion has been exhausted for the moment. McIntosh again showed himself to be a player of enthusiasm and skill. Richmond needs boring wins; games that pass by with little or no fanfare, just chalking up the wins. But, instead, the Club is serving up very familiar style losses. Us fans have very little choice, but to stay on board, to stay positive and support the team. But, at the moment, my sense is that the support is being given with very little joy. The team is stuck in low-mid ladder mediocrity, with no clear path out of it. Hardwick and Cotchin’s press conferences and statements about the team are numbingly ‘on-message’ in which they speak about what can be rectified. Would be great if the club held no press conferences until a convincing win was chalked up. No, until three or so proper wins were chalked up.