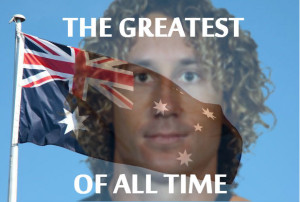 Matt Priddis stepped up to the podium. He was wearing the usual outfit: a black suit, a white shirt, and a black bow-tie. His curly blond hair hung almost to his shoulders. Some curls gently fell onto his checks and over his forehead.  He smiled; he grinned; he chuckled to himself. He thought to himself, “my time has come”. He thought to himself: “my time has come. I’m here. I’ve arrived. I’ve made it. Let them all eat their tin load of Humble Humble Humble Pie. I’ve eaten mine for a little too long.”

At his team’s table, sat his teammates who had also been invited to the Brownless Award gala dinner event shebang. His teammates Joshua Kennedy, Mark LeCras, Eric Mckenzie and ducking pioneer Scott Sellwood, sat with their girlfriends gently sipping their beers and champagne. Smiles were had all round. Hehehehehe. Collectively they thought: “we didn’t make it to the finals – but, yes, we can’t stay out of the Brownless. We’ve bagged another one of those little Charlies.”

“First of all, I just want to say this is a humbling moment for me,” Mr.Priddis said. He paused. “I’m fucking stoked. And: let me tell you. I deserve it.”

“I want to thank my parents. Mum and dad. Mum and dad; Mother and Father. Jan and Jim. How’s that for Ocker? Hehehehe. Love em. Great work Mum and Dad Jan and Jim. This is your medal just as much as it is mine. Well, almost. Nah. Not even close. It’s all mine.”

“I’ve trained fucking hard. I’ve laid off the steaks. I’ve hit the gym. I’ve avoided the beers. I’ve been loyal to my girlfriend: haven’t played the field like certain others in the team. HAHAHAHAHA. Yep – I’m talking about you guys in particular: Macka, Johnno, Robbo and Tugga. HAHAHAHAHAHA. I know all about your  exploits. HAHAHAHAHAHA. Love those blondes, eh? Delicious, Bruce would say. HAHAHAHAHA.” “It’s a great relief to finally receive the recognition that I’m due. I must admit that I don’t have as much talent as some of the previous winners. I’ve got more. They’re a lot of shite compared to me. Jimmy, Adam, Gary, Chris, Dane, Jobe. Oh their crappy kicking. Their crappy skills. I know where the ball is and I don’t rely on anyone else. I get me own hard ball. Hard ball. Hardballs. HAHAHAHAHAHAHA.  Those other so-called winners: they’re slow, they’re overweight, they’re ugly, they’re plane, their boring, they don’t get the ladies. Oh the misery. First amongst losers, I say. They haven’t won any flags. They live in crappy suburban homes. Oh the dreariness of their lives.”

“Simmo,  you’re a fucken legend. Much better than the grumpy ol Chemist we used to have. No jokes; oh the irony we had a drug problem while he was our coach. Now, we’ve got you. And we’re using our drugs much better. No detection, still. HAHAHAHAHA. I’m clean! HAHAHAHA. Thanks, Essendon for taking the heat throughout the last couple of years. Let’s not bore the public with another drug scandal. Yep, that AFL has a big broom and a bloody big carpet. We’ve all been told: no scandals for at least another five  years. It’s not in the best interest of the game. HAHAHAHAHA. It’s on for young and old. May the best team win. HAHAHAHA. At least we now know that I’m the best player. Enough of this hardworking and ‘not as talented as the others’ bullshit. I’m the fucken best.”