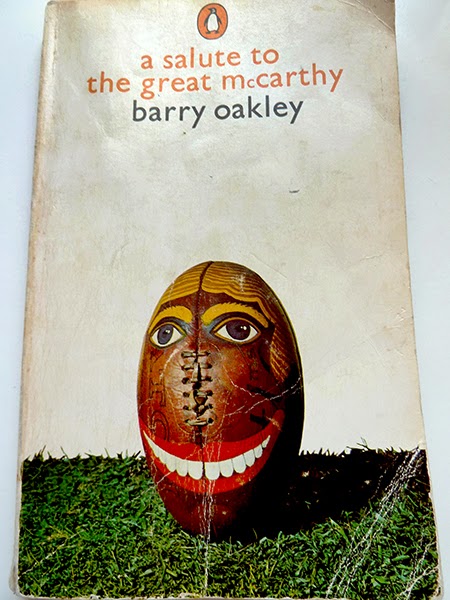 McCarthy the Great is the brilliant young footballer from the bush determined to make good in the bright lights of the city.

The ruckmen face off over the centre circle and for a moment everything is frozen possibility: players, umpire, the ball suspended overhead, the softly clouded sky. Everything except the fans, a circus beyond the stillness. Then the ball swings down and cracks it all open.

Football is a story with no end. It is a bag of air and make-believe, and the dreams of all looking over the fence. Our code – Australian Rules football – reflects who we are, what we want to be, and how we’ve created our place in the world.

Melbourne, a bookish city, is considered the sporting capital of Australia, a country where the national gaze is often enough drawn outdoors. We are enticed by feats of the body: the toil of the fast bowler, Cathy Freeman’s stride, wood-cutting at the show, our muscular winter pursuits. Historian Graeme Davison, an Essendon man by birth, coined the “imaginary grandstand”; the bare oval as a crucible for national identity. We barrack, we belong.

Sport is a drama played also in the mind. It is an imagined game. It can be found in books, in words, in ideas. “It goes to my head like a drug,” wrote Barry Oakley in A Salute to the Great McCarthy, published in 1970 and still ringing true. “I see at once the essence of football, it is a performing art, the ball now coming again, lower and faster this time, a level bullet.”

If Melbourne has no book club devoted to one of its enduring talking points – sport – then this need change. So this proposal: for founding members for ‘A sports lovers’ book club (& reading guide) to Melbourne’.

The plan is to meet every six weeks to discuss a text based (sometimes loosely) on sport. Bookshops and library shelves are laden with such tomes: cricket, soccer, cycling, running, baseball, football. Need a prompt to read David Foster Wallace on tennis? See details below.

My colours are yellow and black but please, dear sports fan, dear football lover, do not be dissuaded. It is my prejudice, my burden, but also my great joy when Dusty has the ball and his chest is open, and a low winter sky is filled with possibilities and all else in the world means nought. For that moment, I am lost in the game.

As with the crowd in the outer, the idea of this book club is to be open to all. Carlton people, even. The game once may have fractured along inner-city rivalries and feuds, or on suburban and country recruiting zones, but it also made us as whole. It is a shared language, easily understood by all who follow the ball’s oval-shape of chance.

Has anyone had the pleasure of reading Miriam Sved’s debut novel, Game Day, tracing the season of an imaginary AFL club in Melbourne? The club is short on success and stuck in memories of faded glory and I am sure she based her book on my club, Richmond. Others may have come across Paul D. Carter’s Vogel-winning debut novel, Eleven Seasons, about the hopes of a young man growing up in Hawthorn’s recruiting zone. And I’ve only ever heard good things said about Nathan Buckley’s autobiography, All I Can Be.

So, yes, a sports fans’ book club, with a leaning to the local game.
Expressions of interest from Footy Almanackers and all other readers of the game (and other sports) are called for. The inaugural gatherings will most likely take place on a Thursday night, probably upstairs at Young & Jacksons, for reasons of historical curiosity. It’s where the committee of the Victorian Football Association in the late 19th century would group and tabled their annual report. It is also rather central.

Some guys are good at school and telling jokes or they have the latest stuff. Others are cricket or basketball players: they can do things with the ball that make their classmates talk about them when they’re not around. His thing is football. He becomes the centre of whichever team he plays for: he becomes the advantage.

The proposed first text is not a book, but a play: David Williamson’s The Club. For many, it might be an opportunity for a re-visiting – a fresh look at a 1978 classic comedy (readily available in libraries), an easy introduction to the literature of sport.

Anyone who’s interested in being part of this regular sports talk-fest, please email me on the address below. Once we have numbers, a format and process can be agreed to.

For now, a last word on football goes to Richard Flanagan, writing on kick-to-kick in a Launceston school yard, in The Narrow Road to the Deep North:

“Kick it! he heard someone yell. Kick the fucker before the bell rings and it’s all over.

And in the deepest recesses of his being, Dorrigo Evans understood that all his life had been a journeying to this point when he had for a moment flown into the sun and would now be journeying away from it forever after. Nothing would ever be as real to him. Life never had such meaning again.” 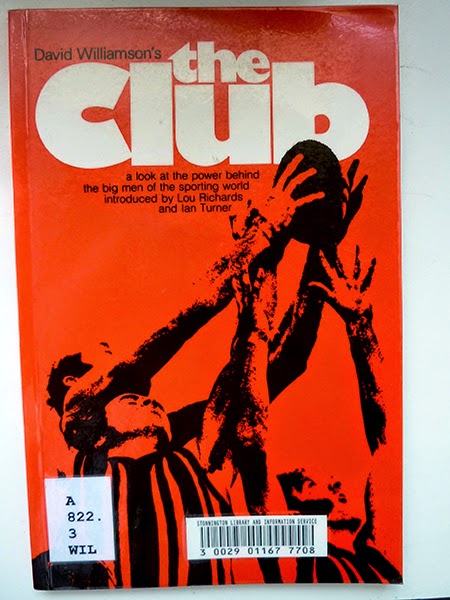 The Club is about the hangers-on, the end of loyalty, the coming of professionalism, big business and massive transfer fees. It’s about each and every club in the League.