Last year while Richmond surrendered meekly to Melbourne, just 2 days after Tommy Hafey died, I was at King George V oval with my mate Rob watching Glenorchy Magpies play Clarence. Coincidentally on Saturday we were back there again, but this time the visitors were the Lauderdale Bombers. Both sides were unbeaten after 3 rounds so we were expecting spirit, skill and a bit of spite.

The City of Glenorchy is contiguous with the City of Hobart, and consists of Greater Hobart’s northern suburbs. Creek Road is the boundary, and this is often referred to as the Flannelette Curtain. Hobart is more affluent, tidy and smug. Mums drop the kids at school in huge 4WDs and go to Pilates class, and in the evening people have dinner. Glenorchy is where you are more likely to see a lot of high-vis clothing on the washing line. The kids take themselves to school, mums work long hours on their feet, and in the evening people have tea.

Lauderdale is a bit of a sea-changey small town just on the urban fringe of Hobart’s eastern shore. It’s the home of Melbourne’s high-leaping Jeremy Howe and test wicketkeepers Tim Paine and Matthew Wade.

Rob’s nephew Phil is a utility player for the Bombers, who wear black and red hoops reminiscent of the Western Sydney Wanderers. Rob’s sister Colleen and his mum were there to cheer them on, rugged up and with home-made Anzac biscuits to share.
I had been up early for the Hobart dawn service, then during the morning heard the broadcast from Gallipoli on the radio (I had been looking for some kind of panel inquest into Richmond’s problems). As we arrived at KGV my third Last Post of the day commenced. 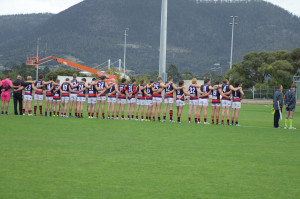 Looking east to the hills across the river from Glenorchy

Phil the midfield general. All photos by Sally Bennett taken from TSL site. 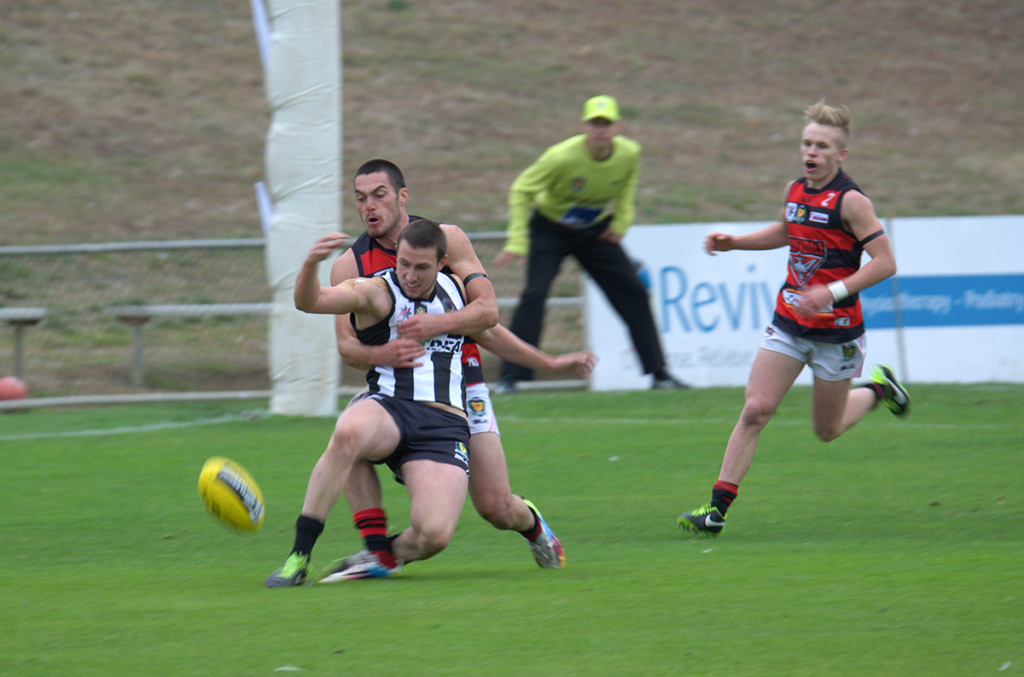 Lauderdale dominated the early going, a bit wasteful but clearly the cleaner handling side. We went to the Lauderdale huddle at the first break. In AFL style they spent most of it in groups with their line coaches. They came together for a final address from their coach, the softly-spoken former Clarence hard man Darren Winter. Someone had 5 tackles for the quarter and was applauded. By halfway through the 2nd quarter they were up 6.7 to 3.2. Phil had come into the game carrying the flu, and looked finished at quarter time. He hung in there though. Just before half time the Pies (in regulation black and white vertical stripes) pegged the margin back and in fact looked like they had the momentum to break the game open if the break had not intruded. 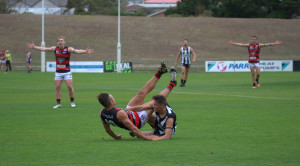 We lined up for coffee and a pie in front of an orange shipping container that featured a 2-metre high corflute head of Sir Douglas Mawson. Of course. The queue was blocking the sign that said “Mawson Pl….” and it wasn’t until we reached the front that I worked out the story. Down at the docks a few years ago a windy plaza had been designated Mawson Place, and an entrepreur popped up suggesting it would be a good place for an artificial ice rink. Incredibly the city council backed him, but it was not embraced by Hobartians or tourists and was promptly removed. The container had been the ice rink’s office.

When our turn came the news was that the pies were cold, so I went with a hot dog. Sometimes if I am honest I just want anything hot and filling that I can put sauce on. It was a good hot dog, and the coffee was strong and hot with order filled correctly. The kiosk was staffed by three nannas, a strong traditional ladies auxiliary approach. At Lauderdale last year I was alarmed by the pancake makeup, bling and cleavage on show in what was clearly a “player’s girlfriends”-run operation.

It was one-way traffic after half time. The Bowden brothers kicked seven between them for Glenorchy, and the Bombers brains trust just couldn’t find a combination to quell them. They ran right over the top of Lauderdale who were goalless in the third and only managed a couple more majors in junk time in the last. I was seriously freezing by then. I must remember to always take the footy with me; the kick to kick at the last break really keeps the circulation going until home time. 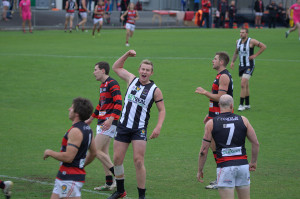 AORR – all over, red rover.

Phil had been swung into defence in the second half and tried manfully, getting named in the best players. At the siren we gathered ourselves to leave and were standing in a windy concourse when Rob’s brother Paul rang Colleen, Phil’s mum. It was like a cartoon where angry chipmunkish gabble comes out of the receiver. Colleen was saying “I know. Yeah. Oh well. Yeah. Not good. Yeah I know. Oh well. Listen I’ll give you to Rob”. Then we stood with teeth chattering for another five minutes until Rob could get Paul and his coaching theories off the line and hand the phone back to Colleen.

Then he and I staggered stiffly to the car and returned to our side of the curtain.