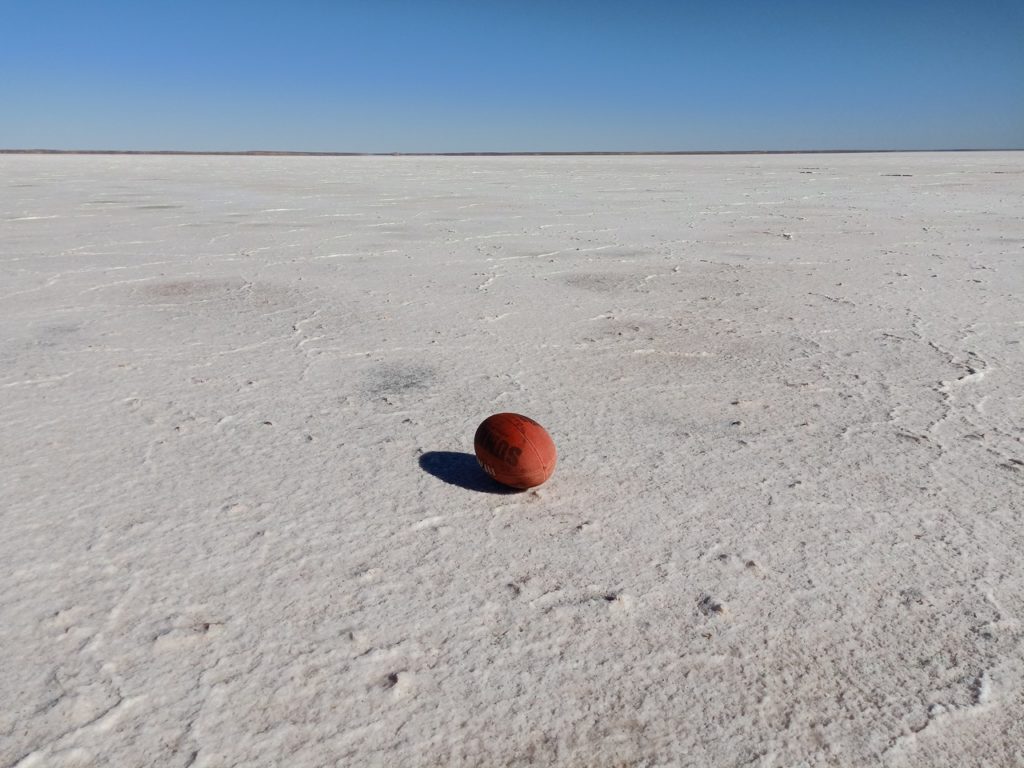 NEXT TIME BRING A KNEE-RUG
A week ago I was with family and friends kicking the footy around on the immense salty crust of Lake Eyre, twelve metres below sea level and 1,500 kms away from the MCG. (Actually, the nearby town of Marree has its own MCG, a modest oval of dust and gibber. But it’s a long time since Marree managed to field a team, probably as far back as the when the old Ghan railway stopped running in 1980.)

Back in Melbourne, a friend calls to say they have a spare ticket in a fancy part of the Great Southern Stand where I’ve never been welcomed in the past, perfectly positioned on level 2. The seats have built in drink holders and there’s a bloke who holds the door open when you head to the bar. That said, there’s an icy wind blowing misty rain across the ground and I realise too late that I should have brought along a knee-rug. (This might be one of those coming-of-age moments where one acknowledges a new level of maturity, in this case the embrace of being an old codger.)

I arrive just as Sydney Stack shimmies around a couple of opponents and spears through a lovely goal at the city end. Young Syd plays with such endearing confidence, and I can see why he’s so quickly become a crowd favourite. Meanwhile, the opposition go one man down when Coniglio collapses with a knee injury. My friend Mary tells me that ‘coniglio’ means ‘rabbit’ in Italian, so we’re disappointed now that we won’t get to make any Easter themed jokes about the Rabbit and the Egg contesting a loose ball on the half-back flank.
Embed from Getty Images

Nevertheless, throughout the afternoon I greatly enjoy calling out Derek Eggmolesse-Smith’s excellent name whenever he gets the ball. (Incidentally, the atmosphere on level 2 does seem a bit too genteel, so I feel obliged to holler in my most raucous voice whenever the urge takes me.)
Embed from Getty Images

The Tigers effectively win this game in the first quarter, kicking four goals to nil. Jack Riewoldt celebrates his return to the team with one of these, after marking a beautiful long pass from Tom Lynch. We see a few instances of this linking between our two big forwards throughout the afternoon and hope that this augurs well for the forthcoming ‘business end of the season’. The wet conditions don’t make it an ideal day for tall marking players but, despite this, Lynch pulls in a few rippers throughout the day. He’s such a big, strong unit, seemingly growing in confidence as the season goes on.
Embed from Getty Images
I confess that I’ve been slow to warm to our prize recruit. I’ve been put off by his preppy good looks and by the shabby saga of his desertion of his former team, even though one can’t really blame anyone for wanting to depart the Gold Coast. But now I’m coming around. I have to admire the way he’s fronted up for every game of the season, even though he hardly trained in the lead up. He’s stuck to the task, and despite some flat patches, he now seems to be striking top form at precisely the right time.

Our team have their running game up and going, linking beautifully with handballs and deft kicks to take the ball the length of the ground. It’s only when we get inside our attacking 50 metre arc that things too often come undone, a failing lamented by the coach after the game. There’s always room for improvement.

Momentum ebbs and flows throughout the remaining three quarters of the game, the opposition sometimes coming back at us before the Tigers inevitably respond and steady. Our lead gets out to six or seven goals at one stage, finishing up at around the same four-goal break we set up in the first stanza. For the GWS franchise Jeremy Cameron is always a threatening presence, and we’re glad he’s missing more shots at goal than he’s kicking. Toby Greene does an excellent job in his role as pantomime villain, the player we love to boo whenever he touches the ball. He touches the ball 34 times, so the pantomime has plenty of life throughout the afternoon. The best moment is where he gives away a (quite soft) free kick at the top of the Tigers’ goal square in the final quarter, gifting Titch Edwards a free goal immediately after Kane Lambert has snuck through a lovely curling banana from the forward pocket. I’m sad to see our one-time superstar Brett Deledio looking but a shadow of the player he once was. He’s still a stylish mover, but his ability to impact the game seems greatly diminished.

Less elegant but much more effective is our man Kane Lambert, stepping up on three occasions throughout the afternoon to kick vital goals that shift momentum back in a Tigerly direction. There’s nothing flashy about Lambert’s game but he’s a tireless worker, and I reckon he ends up being the best player on the ground.

Our defenders are as staunch as we love them to be, combining beautifully to repel most opposition forays. (Reading the stats after the game I see that GWS narrowly won the inside 50 count, but the quality of our defence meant that they never ever looked like winning.) Bachar is in superb form, running the ball out of defence all afternoon, and Dylan Grimes puts in one of characteristically effective Inspector Gadget performances. I enjoy the Tigers’ mix of players that exude style and class – Shai Bolton being the most conspicuous in this match – and others that play the game in a less conspicuous but no less effective manner. Lambert might be the best example, but Prestia, Ellis and Broad also fall into this category. I have that feeling again that the Tigers are a really strong team, building momentum as a host of good players return from injury. The fact of a player as good as Josh Caddy running ‘round in the reserves this weekend reinforces the notion that we suddenly seem to have an abundance of talent. With several challenging games to come in the remainder of the season, we’ll soon know whether this optimistic perception is justified.
Embed from Getty Images