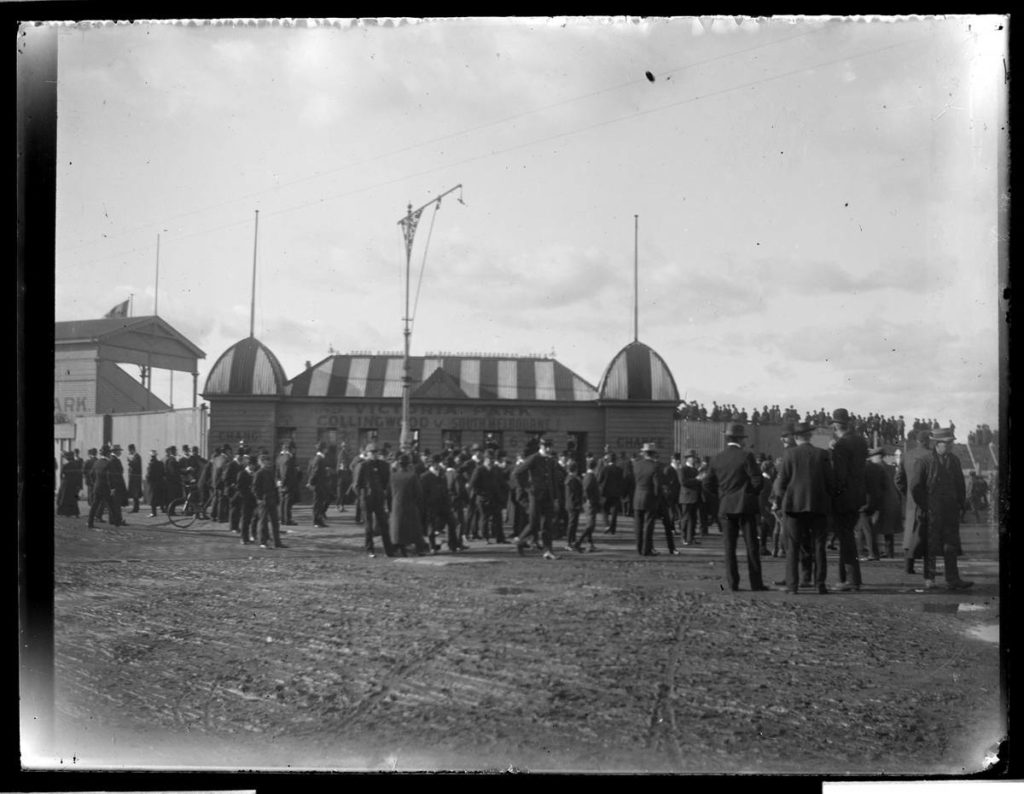 This story starts way back in the early 1900’s, 4 brothers all born in Richmond. Joe (my grandfather) chose Richmond as his team, his brothers as follows; Eddie, North Melbourne, George Fitzroy and the youngest Ronnie chose Collingwood. Three of the four stayed in Melbourne and were all long serving paid up members of their respective clubs; all more than 50 years. George the Roy Boy moved to Adelaide after the Second World War.

All four brother served in the second world war, the youngest Ron being “seconded” by his eldest brother Joe into his unit so he could look after him. One of the old letters we still have as a family was from my grandfather who in WW2 wrote to my nanna and said you might not hear from me for long periods but no matter what keep my Richmond membership paid up.

After serving in North Africa and Greece the eldest and youngest of the brothers served in Papua New Guinea together it was here that Ronnie was wounded. Keeping his promise to look after his younger brother Joe carried the wounded Ronnie to an aid post and came down from the lines to check on him when he could.

In the late 1960’s my grandfather was given a Collingwood social club medallion to use for the day. This allowed him access to the inner sanctum of Victoria Park on game day, the match was of course Richmond v Collingwood. My grandfather was one of the most social people you could meet and enjoyed meeting new friends over a beer. Not long after getting a beer up walked Ronnie. Instead of a hand shake and a how are you going mate Ronnie sneered at him and said “what the hell do you think you’re doing here. How did you get in here, leave now”. Of course the oldest brother took offence and then it was on. Grandpa was ceremoniously turfed out the door after being knocked around a bit; as he said, and never got to see the game. He kept his fist clenched and never gave up the identity of his mate who gave him the medallion. Ronnie and his eldest brother Joe; my grandpa, never spoke to each other until Ronnie was on his death bed some twenty years later. 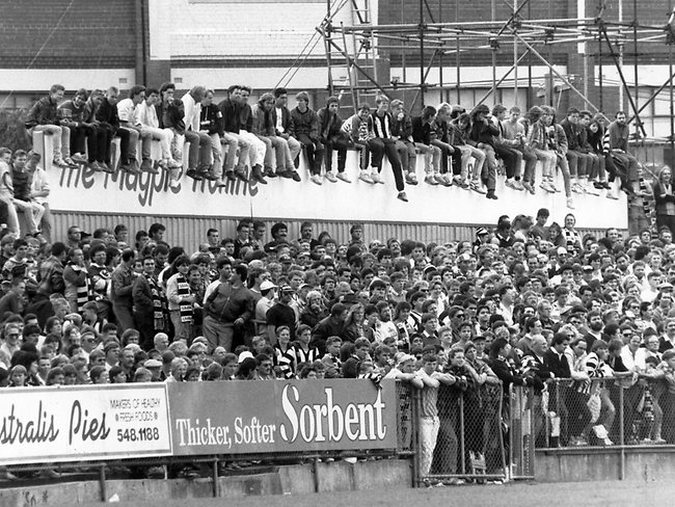 I vividly recall my dad getting some seats in the Rush stand at Victoria Park in the mid 70’s, he even was given a prime car park at some service station just near the ground. Not long into the first quarter I took my coat off to reveal a Richmond jumper with number 10 on the back. Pretty soon after that a lady started poking me with her umbrella. When I looked at her she said “get out of this stand, go and sit with your own kind”. When dad said “leave the kid alone he’s only 10” he copped a whack and again the Thompson clan come under some harsh treatment from that Collingwood mob. We left early… you can only fight so many folk in one stand on the one day you know.

Fast forward a few more years and to my Richmond cheer squad days when Norm was the cheer squad leader. You walked in as one and walked out as one or you’d cop the wrath of the mob from Victoria Park. I was spat on, had cans thrown at me, all sorts of crap but we kept going back. If you’re a Tiger of old then you’re strong and you’re bold.

Jump ahead another few years and I was shaking a tin for the Save Our Skins rally when a car pulled up and a few boys who had been having a liquid lunch started hurling abuse. I flipped the bird at them and a bloke in a Collingwood beanie and his mate jumped out and again arms and legs were swinging. The changing of the lights ensured they jumped back into the car but like my grandpa my fist stayed clenched around the tin and I kept hold of the precious coins for the Tigers and we both lived to fight another day.

I now have two daughters and when our eldest was born at the Royal Womens Hospital we could see Victoria Park. Although 6 weeks prem and barely a week old I took her to the window and said; “Caitlin you can be what you want in life, choose your own path but never bring home anyone from that mob and tell me they’re going to be your life partner”. To this day I still remind her.

My mate Cuz is a Collingwood man through and through. We’ve worked together before, we’ve had plenty of beers together and plenty of laughs. He is a gun at his work, is sharp and a good communicator except when it comes to football. Being a Collingwood man he is a cross between a clown and a muppet in my eyes. I don’t hate Cuz… I pity him.

Hate is a big word so I won’t say I hate Collingwood but this week; as in any week we play them, my emotions run high. It’s in my blood, it’s now four generations of being in my family’s blood. My best mate Bear and I sat at the Mothers Day Massacre, and we gloated. We still talk about it to this day. The 1980 premiership we gloated, as did my sister Kath, my mum and dad and my grandpa. I want to gloat again this week. 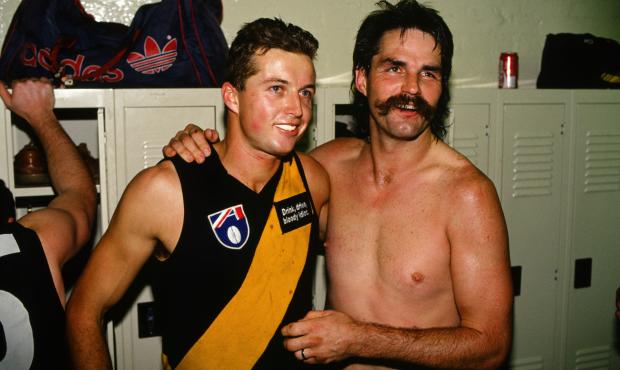 Jeff Hogg with David Cloke after the 1991 ‘Mothers Day Massacre’. In an upset win Hoggy kicked 10.1

My eldest is going on Thursday night, my youngest Emily replied with one word when I said are you going to see the Tigers and Collingwood… “Eeww”. Four generations not liking Collingwood… mission completed.

As for me I’ll be streaming the game again here in Kenya as long as the AFL site doesn’t crash again as it did last week (I blame Collingwood for that you know…).

Go Tigers, eat ‘em Alive so we can all sing that song again Thursday night. 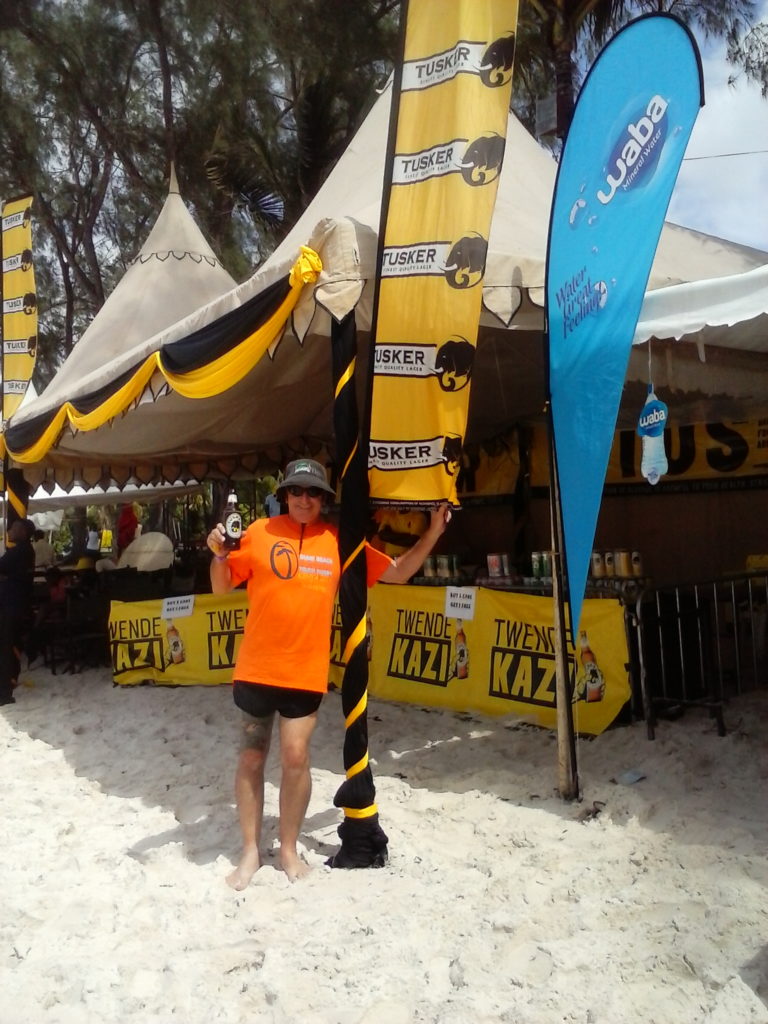 The author at home in Kenya enjoying the national brew, Tusker. Nice colours.