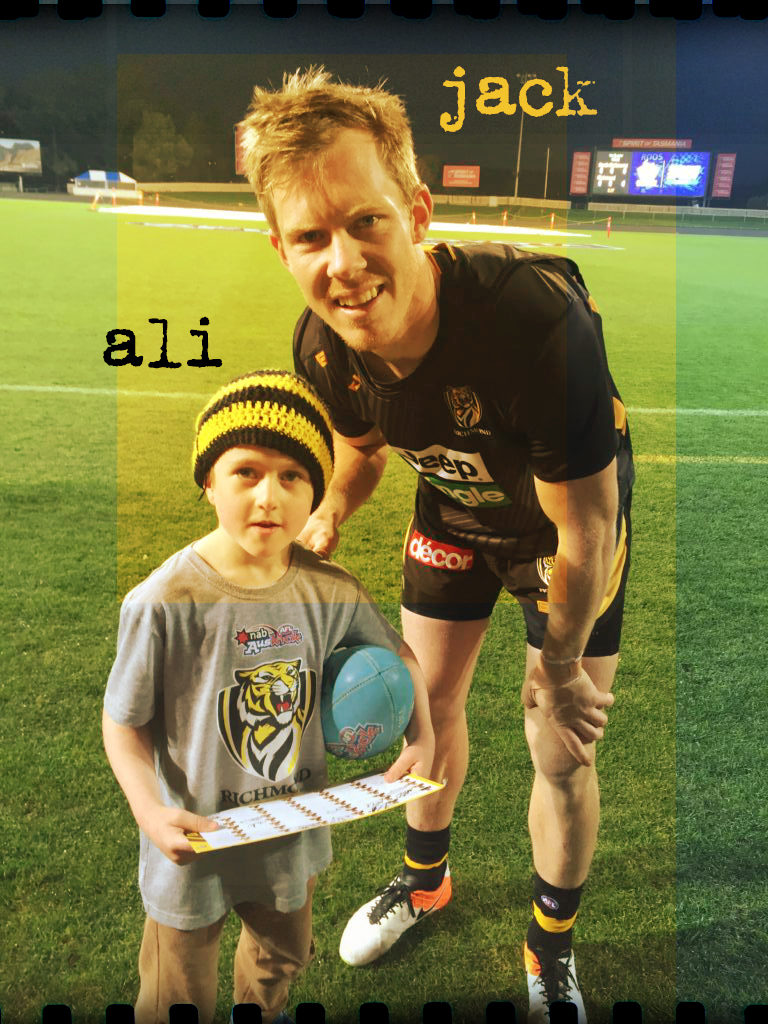 The night before the calamity last year: a Hobart local with Mr 6yo, who does not feel the cold.

At best, it was three degrees. Despite the novelty and the cold winter air, all about the night was forgettable. And yet Facebook tries to remind me, prompting memories with photographs from a year ago. Un-social media.
All who were in Hobart this time last year have cold memories.

Match reports of last Saturday night’s game are glib with the matter – “North had beaten the Tigers seven times in their previous eight meetings,” wrote Rohan Connolly in the Sunday Age – but sports reporters live behind glass, on upholstered seats. They sit not on damp grass on cold earth, sheathed in a blanket, with ski mitts. They are not fans like us. Our memories rarely forget.

This game last year was a low-point in the lowly history Richmond has against North Melbourne since, well, since when Glenn Archer would beat-up on Richo. All knees and elbows, the little knot of aggression hopped-into our long-limbed thoroughbred like a hungry man might hop-into a bowl of hot soup on a cold night. He monstered Richo. North monstered us.

Sure, we beat them last round of 2015, when their team of interns bruised us, mentally, physically, emotionally. A cruel joke. Cheryl Critchley isn’t yet over it.

North Melbourne, a club with less, down by the old abattoirs, that for two generations has given its fans more. A club that fields teams that manage usually to humiliate us. We’re up by seven goals at half-time? No probs, we’ll let them run over us, and ensure a player once one of ours – Robbie Nahas – kicks the goals to put them in front. Salt. Rub. Wound. Richmond. 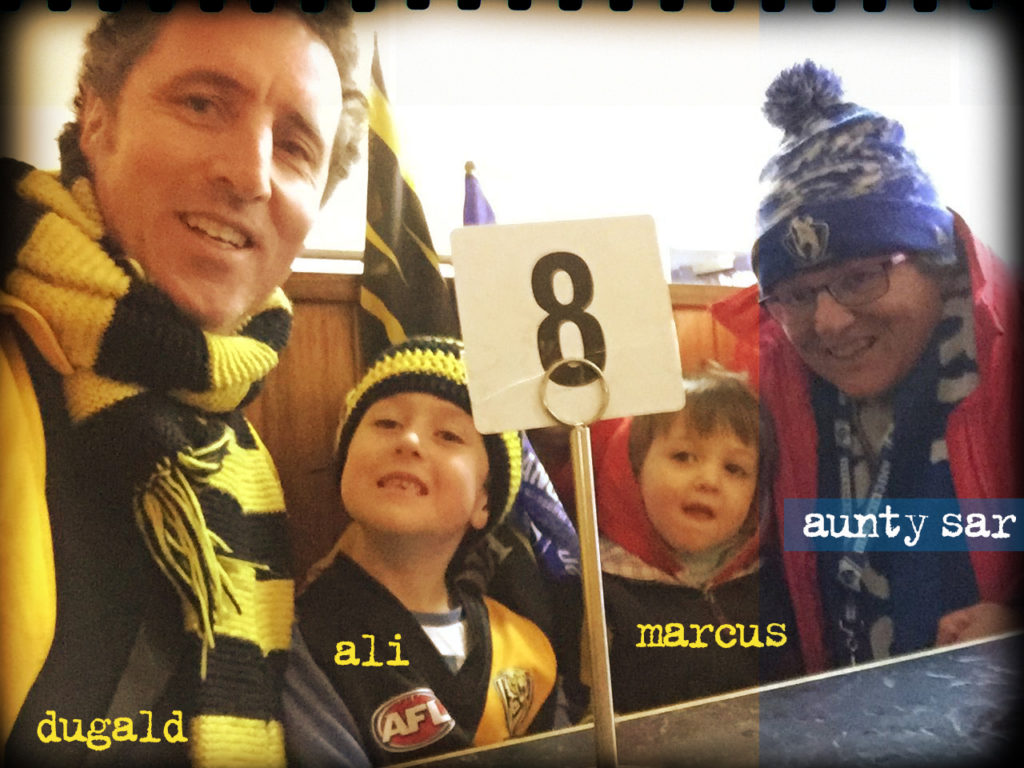 Lucky table Nº 8: fish’n’chips before the game last year with the two boys and my eldest sister, a North fan, as part of her 50th birthday present. She enjoyed the night, I thought it was lousy.

Saturday night, and all was alright, although we never were quite sure, because this is Richmond and recent history says the margin of error is quite large (although for three games this season it was improbably small). We won! Yay! More relief than overblown excitement.

Our team are gelling better than theirs. And for the first time in 18 seasons, we didn’t have to play against ‘Boomer’ Harvey. Phew.
As fans in the stands, in the outer, we see the game differently, from our partial perspective, bringing to a game all our expectations and hopes and life history and who we are. We are not good judges. Nobody is an expert. We all know as much about the game as the next person, and we all want to wrap Dusty up in a bundle of love, make him happy, fulfilled, enriched, our little project, our warrior leader, indefatigable, we might follow him into a pit of fire, howling against the world, against all its social injustices, against inequalities, phonies, fakes, yes-men, hangers-on, fat cats, those who hardly know the value of a dollar and the truth of a hard day’s work.

See, that’s just me, at the football. Of course it’s more than a game.

It’s what we look forward to all week, our emotional release, seeing the beauty and skill of young and fit men in the prime of their lives doing extraordinary feats of bravery and athleticism. Or is that just Dave Astbury and Alex Rance in the back half?

And a cheerio to them, on their camping trip. Hope they’ve caught some fish, packed warm sleeping bags, enjoyed the fire-side. Anyone know where they are? My guess is the Edwards River, an anabranch of the Murray. Just wanted to use that word. Anabranch. So specific. 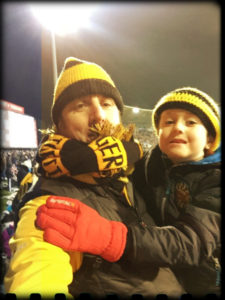 The North game last year: staying to the bitter end.

Oh, yes, votes. And what was I saying? We all see a game differently, from our vantage. So, Dustin Martin has 38 possessions and kicks two goals and all the pundits give him the three votes, but many of us Richmond people aren’t so sure. We know he can play better games, more damaging games. A team is all apples and oranges, maybe the occasional banana, hoping to make the perfect fruit salad.

Bad analogy. There’s no place in football for Kiwi fruit.

Fans like me judge Dusty and Cotch and Jack and Alex to higher standards because through inherited gifts and dumb luck and hard work, and dedication, they are simply better players. They ought to appreciate this, if only for the betterment of the team. All are not equal on a football field. It is self-evident some are faster or taller or can kick a ball longer or straighter, or can stand-up in a tackle more often than others. But each must pull the other along, together. It is the essence of the word ‘team’; as in a teamster, a team of draft animals, each of them a beast of burden.

Dusty is our bull, but we need more than that. Where would our club be this season, where would this team be, without Toby Nankervis? He’s our lucky break. He was no long-term plan. We didn’t pick him in the draft, identify him as talent, school him. Maybe midway through last year he came onto the club’s radar, or maybe it was later than that. There is much luck in football. Or is it good judgement? Ivan Maric got us out a pickle. So, too, has Nank. But he needs some support.

Reckon we also need a bona fide centre-half-forward. Todd Elton, we are all with you on this (or at least I am). Get that shoulder right, fans like me have not given up. Keep jumping for the ball, flying for it, at least splitting open packs, getting the ball to spill. It’ll come. The ball will stick. So much of the game is also confidence. Look what Dan Butler and Jason Castagna and Dan Rioli are doing, and what Shai Bolton is threatening to become. When your tails are up, anything can happen. 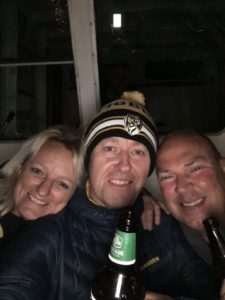 Beers to tears: Justin Flynn and his merry crew “on the ferry over to Bellerive, before the carnage, with a wind chill of minus 4”.

Bachaaaaaar gets my five. Controversial, no. Ramadan, yes. Thirty-one possessions, but who cares about numbers? When he got the ball, he gave us run and carry across the mid-section of the field, he gave us composure, he gave us a get-out and an attacking weapon, he gave us his beautiful, raking left-foot kick. Eighty-nine per cent game time. Only four other players are higher (Rance 100, Riewoldt 93, Astbury 91, Grigg 90), and my guess is none of them covered the territory Houli did. He has been a blessing for our club. I thought his game was marvellous. I would like him to taste my babaganoush.

Brandon Ellis gets my four. No longer “much maligned”, not this season. He’s straightened-up his game this year, is kicking crunch goals at critical moments, is getting in all the right spots, staying on his feet. He’s become more than dependable. He’s become one of our brightest assets. A gauge for all football fans: the heart rate when certain players have the ball. Dusty gets it and my heart skips a beat (knowing he can hit a target 60 metres upfield with a laser bullet). Jack leads and takes a mark and I can at last breathe, knowing the ball is in good hands. Alex takes the ball out of defence, running with all his pomp and confidence, and my confidence rises, too. Brandon Ellis got the ball on Saturday night and good things happened. The ball changed direction, went our way, went to good places, positions of attack, of our advantage. Well done! Been a great year so far, and he deserves it.

Three votes. Dusty. You cannot keep a good man down. He is a good man. I like the way he spoke after the game. A weight seemed lifted. He seemed easeful. He will stay. He is one of us.

Two votes. Cotch. His partner in crime. Been bloody brilliant this year. All leadership (except giving away that free off-the-ball in the centre of the ground that cost us a goal! Bad Cotch!). Good Cotch is a tireless combatant, slick hands, kicking goals again, run-and-carry, dropping his knees in tackles, is everywhere. Would any player be sorer after a game? He is remarkable. He is ours. We love him, we admire him.

One vote to Dion Prestia. Early in the game he fumbled the ball and my thoughts – uh-ho, here we go again – but slowly and methodically he turned it all around and kept getting involved in the contest, again and again (a game-high 11 possessions in the last, along with Cotch and Houli), kept running, contributing. Thought he was excellent. A rites-of-passage game.

Honourable mentions, in no particular order. Kane Lambert. He’s strung together a series of good games of workmanlike footy, that have started catching the eye. He’s put himself back in the picture, through effort and application. Toby Nankervis, our totem. We owe it mostly to him. Outpointed Goldstein (3 marks to 0), carried the load on his shoulders, long may he stay in one piece. Good stuff, big fella. Enjoy the long and hot baths. Dave Astbury and Alex Rance. They’ve become a two-hander, with the odd cameo from Dylan, a yin and yang, sidekicks to each other, both playing with care and confidence. Each make the other a better player. If one doesn’t get you, the other will.
We are proud of our Tigers, and happy for them they’ve gotten to the bye with their character intact, and now enhanced. A string of heartbreak losses, fatal mistakes, and all could have been derailed. But they’ve turned it around, put it behind them.
That’s what good sides do. And good sides keep finding new ways to win. Long may that be the case for this second long act in the season. 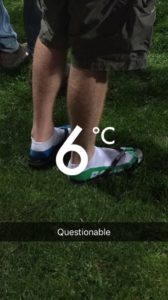 A balmy six degrees and as seen at game last year (& this man last seen dispensed from casualty ward with frostbite).
Pic supplied by Luke Wentworth.