Q1 I don’t really know the ends of the ground that well as this is only my second time at Geelong. It is always too damn cold to venture to this ground for me. Ferocious from the bounce, Tigers were hungry for it. The boys doing everything right to make sure the pill stayed at our end. Kane, Kamdyn, and Shaun were right in it. Hand balling, kicking it and the ever-elusive shepherd. How good was it to have Jack back? He was raring at the bit to get a touch and having Josh Caddy there I think is a huge relief for him. Gives him a bit of room to move. Unfortunately Josh did a hamstring and was taken off. That was the first 15 minutes and the Cats were having none of our shenanigans, not on their home turf. They worked on starting to derail the tiggy train. Cats 3.2 21 Tigers 3.4 22 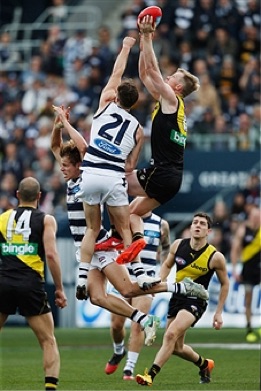 Q2 I am at freezing point, did I mention how cold it is down there? The wind was really swirly, horrible weather to play football in, we should have called off the game for nicer conditions. But no we must endure and we did. At every effort Tigers tried to bamboozle the Cats. Now outside of my Tigers and after Lids, Dangerfield is my favourite player. And today he was showing off for me, I am not sure of his possessions but both him and Guthrie amongst a few names were showing us up in the middle. It was like a keepings-off game that the Tigers were losing. Credit where it is due – as mentioned a million times they did not have Selwood or Hawkins. But what difference would it have made? The Cats playing on the day stood up and really showed the defensive pressure they have at both ends of the ground. Cats 8.5 53 Tigers 4.5 29

Q3 Dion Prestia, Nick Vlaustin and Dylan Grimes are doing all the right things and I am not the only one saying it. Intercepted, tackled and kicked forward. Again I am not a stats person, you can check that yourself, but I feel they held up the third quarter for us. Of course there was goal kickers too, but being able to stop that ball assisted in us getting goals in this quarter to even up the competition. Need to mention that at some point Dangerfield is off with blood rule so something was going right. Cats 8.9 57 Tigers 7.9 50 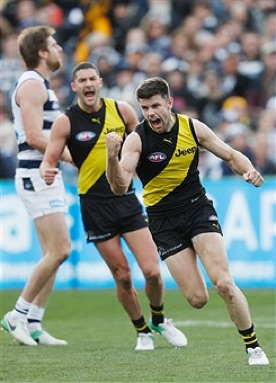 Q4 Did I mention the cold? I doth protest too much. We had a fighting start with the margin so small what opportunities would we take? How could we rally the boys to get us on top? The Tiger Army were in full voice. It was mentioned to me it was the battle between 3rd and 4th but for me it was Dusty and Danger. I had not mentioned Dusty as yet because I was hoping it would be the full leadership team in the last quarter. To keep our heads above water and cement that 3rd place. Seeing the score from the Sydney vs Freo game (which at 2nd qtr was 84 Swans to 9 Dockers) I knew we would have those cursed Swans biting at our tail as well. The Tigers tried on separate occasions but our kicking was just not working for us and Cats intercepted almost every attempt to get the ball back into our 50. Dusty was taken off for about 10 minutes to rest to come on in the last 15 (I think) with his last fighting tiger effort. He really put his heart and body into it but with Dangerfield, Guthrie and Henderson intercepting, the Cats were not going to stop just because of a ‘don’t argue’.
If nothing else my mum is happy this week. In the end what does it matter – we are playing finals.
Cats 11.14 80 Tigers 9.12 66 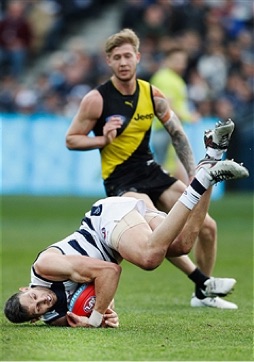 Votes
5. Dylan Grimes He is a work horse no doubt that country air is doing him the world of good seeing he runs from one side of the ground to the other, it really makes you think he must have enormous lungs to go with those strong arms and legs.
4. Dion Prestia I admit I don’t know much about Dion but I feel we are going to have plenty of time to get to know him as he is proving himself a real value to the team.
3. Kane Lambert I think Kane has done the hard yards at Tigerland and he has gotten used to the senior side and is really endeavouring to make an impact.
2. Dustin Martin I know so many of you are going to say he should be higher but it’s Dusty and he is doing what is expected of him.
1. Nick Vlaustin He is a feisty fellow our Tigger and this game he needed to be, we needed someone to help Alex and be that line between that back and middle’s and Nick attempted all day to do that.
Honourable mentions: Daniel Rioli watching him makes me smile ear to ear and I feel Shane Edwards has taken him in and they just work well together. Nathan Broad he was having a real go at everything in those conditions yesterday it was nice to see.
Go Tigers