I love games against interstate teams. The crowd is small, but the crowd is partisan. The WCE fans were far away in the Ponsford Stand when their team goaled, I couldn’t hear them cheering. Silence. ‘No one cares’ as one guy said in the Punt Road End. Except we did care. A guy wearing an Eagles scarf in the PRE stayed silent; not perhaps wanting to provoke anyone. I got caught up in the frustration with the umpiring of the game. There are no hard and fast interpretations of the laws of the games. 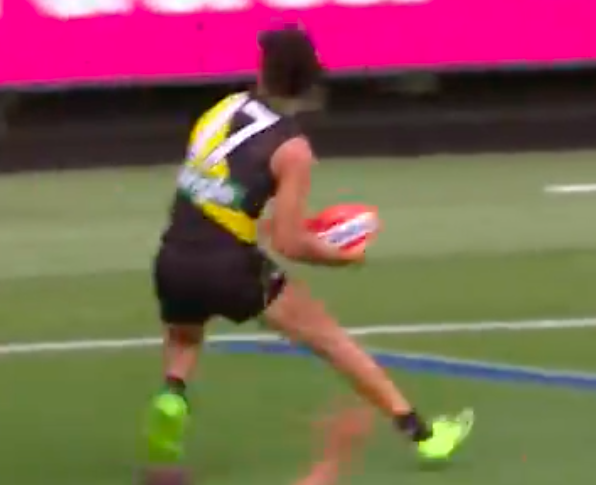 Votes and notes this week by Andy Fuller

I love games against interstate teams. The crowd is small, but the crowd is partisan. The WCE fans were far away in the Ponsford Stand when their team goaled, I couldn’t hear them cheering. Silence. ‘No one cares’ as one guy said in the Punt Road End. Except we did care. A guy wearing an Eagles scarf in the PRE stayed silent; not perhaps wanting to provoke anyone.

I got caught up in the frustration with the umpiring of the game. There are no hard and fast interpretations of the laws of the games. The infringements are considered by the degrees to which the laws are broken. I guess. But the degree to which the Umpires were booed and cheered ironically indicated the tension in the game. This was a game that could present us Tigers with a 3:0 start to the season. Something not done for, er, quite a while.

With a smaller crowd, it is easier to find oneself a seat where one wants to be. I moved three times. I moved through the turnstiles with one minute remaining before the game started and thus went to standing room at the Punt Road End. It was crowded but not full. Many men with plastic cups of beer. A man at the back stood with two children: he donned a @4boat Bones t-shirt. During the second quarter I moved to the lower deck, slightly southern pocket. I was lucky: I had a guy behind me who was giving free ‘expert commentator’ commentary non-stop. When Rioli kicked his beautiful goal in the third quarter, I turned to him and we high-fived. Ah. And when the rain kicked in I moved back to Standing Room behind the goals. It was noisy and smelly. But it was Richmond with passion. 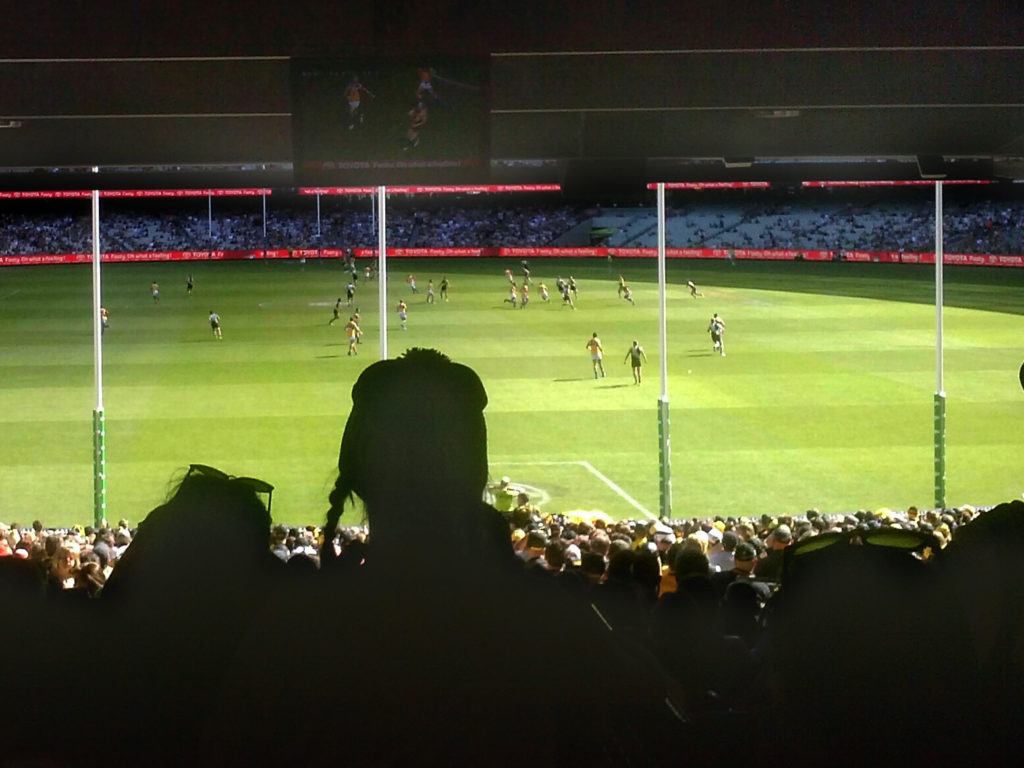 My mother listened to the game on the radio and then during the last quarter one of her friends called. They hadn’t caught up for a while, so, she couldn’t put the phone down. She knew it was close going into the last. And then the siren went and she heard the cheer from near the top of Richmond hill. Indeed, this could mean it was only one team who won. While listening to the game she realised she didn’t know quite a few of the players’ names. I made a list of who wasn’t in the team from many of last year’s games: Brett (gone), Ty (gone), Griffiths (injured), Shedda (injured), Llooyyyyyyyyyyddddd (reserves), Miles (reserves).

Three wins does not a season make. But many players make a win. I’m generally not down on any player in a winning team. That’s up to the coaches and the experts to work out who could be contributing more. In a win, I’m glass-half-full about all players. Even those who had ‘poor’ games: well, at least they didn’t fuck-up too badly and cost us the game.

I’m going with my gut here. My votes are primarily based on the second half.

5 votes – Dusty: he seems to have a few new kicks in him. His body strength means he can maintain balance despite being pulled in all sorts of directions. He can kick or handpass while being tackled. That goal in the second quarter: a perfect drop punt, while running away from the goals. The umpire didn’t move. When things were dull in the second quarter, Dusty’s team mates’ strategy seemed no more complex than ‘kick it to Dusty’.

4 votes – Reece: I love a slow moving man who can weave himself out of fast moving traffic. He’s short, he’s stocky, he’s smiley. He’s been injured a lot. He’s a regular bloke. He’s playing better than before.

3 votes – Bachar: I chose him to represent the backline. It could have been Alex, David or Dylan. The last quarter: it was messy, but there was a ‘none-shall-pass’ attitude from the Defenders that was amazingly reassuring. I didn’t ever feel we would lose. He is back in the game. Last season will be just a blip in his Richmond career.

2 votes – Grigg: Oh what the Carlton fans must be thinking. His goal from outside 50. He is never spectacular, but very often, very effective.

1 vote – Daniel: I missed his wonderful move on the members’ wing during the second quarter as I was busy transcribing what the bloke behind me was saying (i.e. our tall forwards are ineffective; Player X is a cabbage; we are playing into WCE’s hands). Seeing his goal in the third quarter was an ‘I was there moment’. His run and chase throughout the game was fantastic. His shepherd to protect Dan Butler wasn’t necessary, but he did it anyway. That is what his teammates and fans will love. 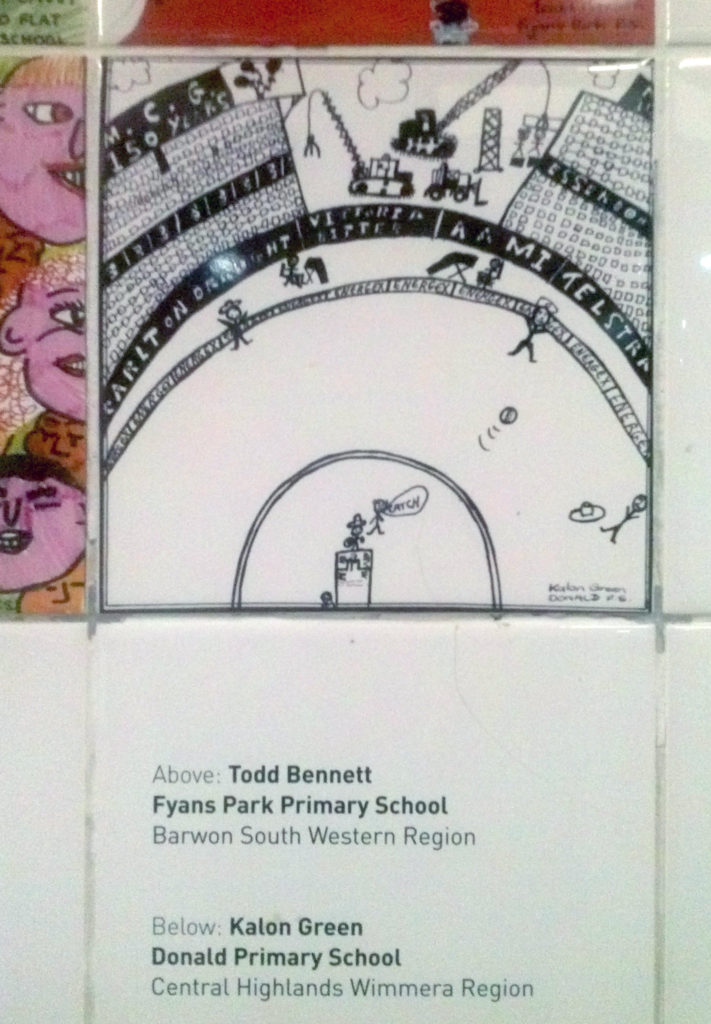 Above and below, some gems from the “Peters Ice Cream MCG School Wall”. 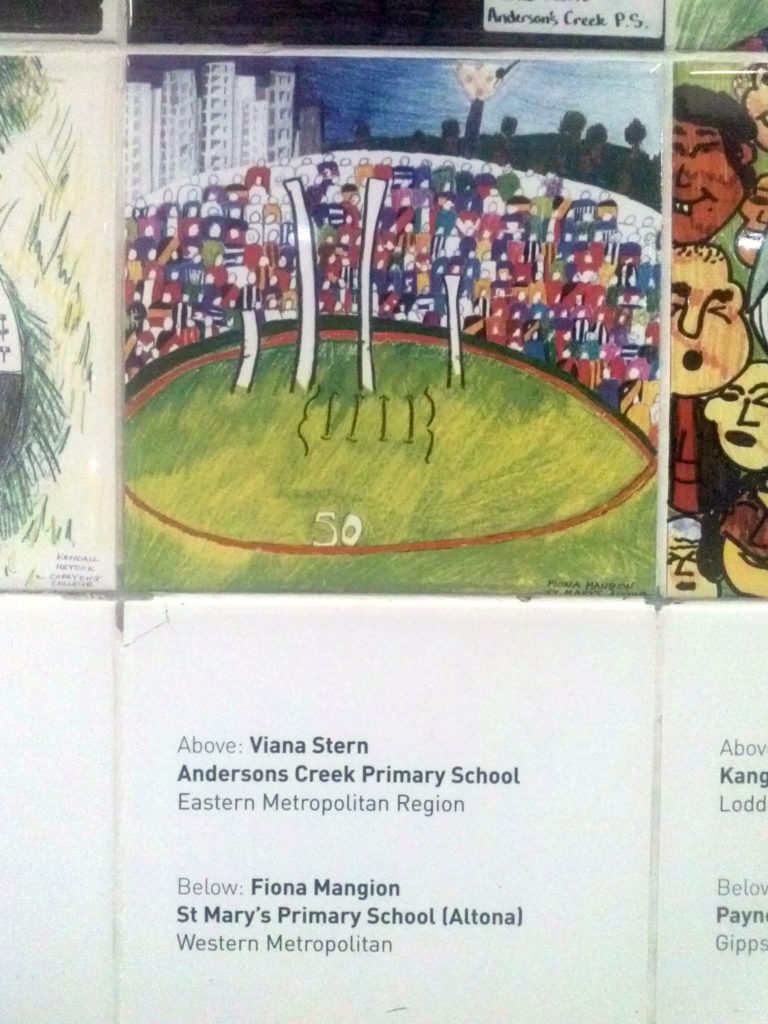