Votes, notes and photo this week from Malcolm McKinnon 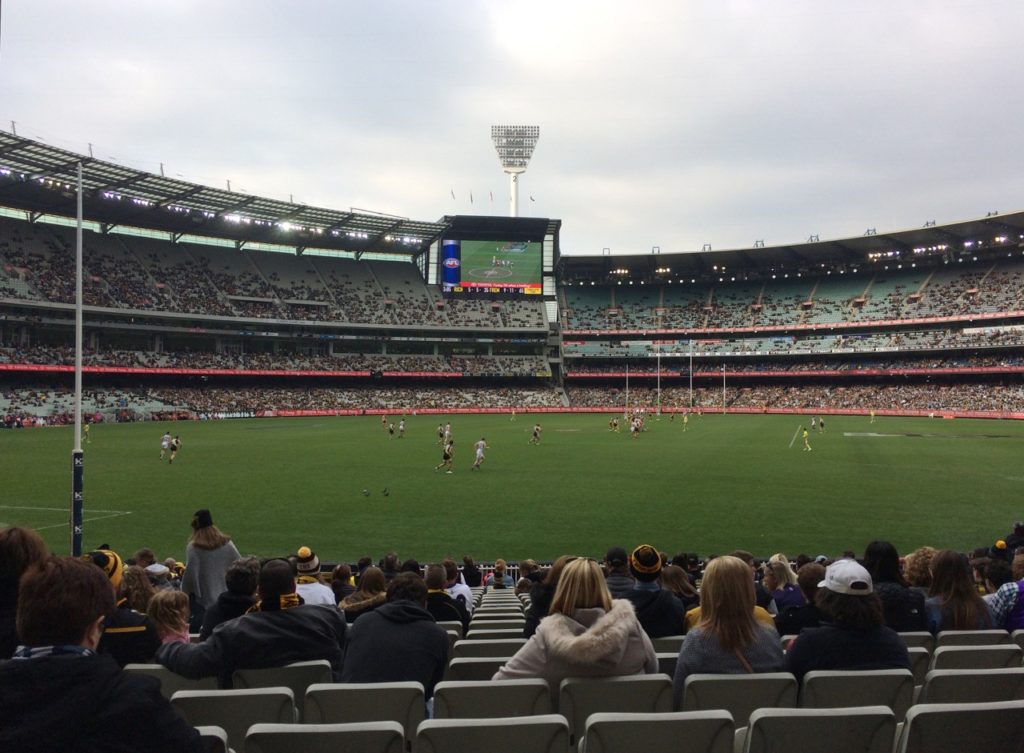 My view from the City end. There were NO GOALS scored at this end for the entire second half of the game, EXCEPT FOR THAT BLOODY ONE AFTER THE SIREN.

David Mundy is an unprepossessing kind of footballer. He’s not very flashy. No visible tatts. No man-bun. But unfortunately for Tiger fans, he’s a champion exponent of the crunch kick at the end of a game. It’s twice now he’s done this to us; once after Bachar Houli snatched defeat from the jaws of victory a couple of years back and now, this time, with a clinical kick after the siren. Our moment of jubilation after Brandon Ellis had pulled a last-minute goal out of his arse was indeed only a moment. And actually, as soon as our boys flooded back into defence after Ellis’s goal I had a nasty premonition: the ball would ping down Fremantle’s end, our players would all get in the way of each other and one of their mob would somehow end up with a shot at goal right on the siren. And, lo, alas, it did come to pass.

Despite the disastrous finish, this was a good game. Both teams had their chances, both looked terrific at different stages of the game and both made about the same amount of errors. And, most pleasingly, both teams largely played an attacking style of footy with plenty of run and carry and lots of long kicking to a contest. Freo had the best two players on the ground – Bradley Hill and Michael Waters – but the Richmond blokes all kept running, especially in the last quarter when all the play seemed to go our way, except for that last, infuriating twenty seconds. Thankfully, the Tigers have moved on from the tedious and ineffectual defensive, over-possessing style of game that we suffered so much of last year. And, amazingly, even a team coached by Ross Lyon seems to have done the same. Hill and Waters and co. were constantly running into space and, in the third quarter especially, we couldn’t seem to lay a hand on them. The ball kept shuttling from end to end. Unfortunately for the Tigers, until the last quarter it mainly kept bouncing back outside of our forward 50 as quickly as it came in. Kicking only five goals in three-quarters of football is a worry, and I reckon that something might have to give at the selection table next week.

Many will disagree, I know, but I’m lamenting the loss of big Tyrone. There were reasons he was such a popular whipping boy, but he could also take a grab and kick a goal. And in the absence of any other effective tall target to support Riewoldt at the moment, I reckon ol’ Ty would be a useful asset.

Fortunately we have Dusty, playing like a man fully convinced that the ball belongs to him and, usually, managing to get it. His work to win a contested ball on the boundary line late in the last quarter and then spear a pin-point pass to Jack was, to me, the highlight of the afternoon. (Jack missed the easy shot but then redeemed himself a minute later by dobbing a much more difficult one.) Dusty’s foot skills are sublime, and he finds time and shows composure where other players don’t.

It was great to see Sheds back on the field. After a long lay-off, he wasn’t quite up to speed but he still moves and handballs in close unlike any other player I know. He’ll get better over coming weeks. Daniel Rioli isn’t a huge ball-winner but he exudes class and is such a pleasure to watch. And Dylan Grimes continues to impress, not least because he’s one of the daggiest looking players in the game. (If there was a Harry-High-Pants award, he’d certainly be the front-runner.)

I’m really enjoying watching our team playing this year. Fortunately, I didn’t see the Adelaide game, but I’ve watched most of the others. Win or lose, we play an exciting style of footy and we always seem to be in with a chance. Our final quarter come-backs, both in this game and in the one against the Dees have been especially heartening. It was just a pity about that Mundy bloke.

The votes:
5 – Dustin Martin (see comments above)
4 – Alex Rance  Combined defence and attack in his customary manner. Only got his hair all ruffled once.
3 – Daniel Rioli  His hairstyle is a bit too pretty for my taste, but he’s an excitement machine nevertheless.
2 – Trent Cotchin  Not his most effective game, but was strong out of the middle and kicks well when it looks like he’s about to fall over.
1 – Dylan Grimes  I like the cut of his jib. I only wish he’d done a better job at stopping Mundy’s grab at the end.