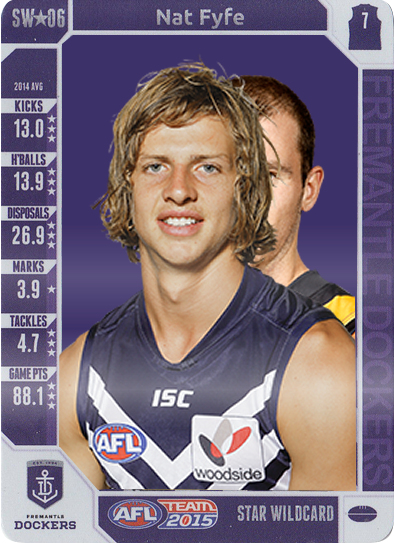 “Come in”. Dimma had heard that knock before. A single strike of trepidation and unbridled confidence. If it wasn’t for the trepidation, he would have said “come in jack”, although he wouldn’t have had to.

“I want Fyfe.” Young Kamdyn strove to maintain eye contact and keep his lips pursed. He looked at the bridge of his bosses’ nose and his ears, and kept things moving forward.

“Yep” Kmac tried giving nothing back. He didn’t do bad.

“He had 28 contested possies on Danger on Sunday”. Dimma leant back on two legs of his chair and joined his fingertips in slowly scratching the back of his head.

“So Ive got nothin’ to lose. You saw me shake Daisy’s shoulder out of its socket. I’m your man. I got the size, the strength, the tank.”

Dimma was seriously impressed. He’d already thought of it. Last night, he’d crept out of bed and quickly poured over the numbers.

When he’d snuck back into bed, he’d lied about salty puttanesca and thirst.

“You reckon?” suppressing grins was one of Dimma’s strengths. The rare times when one escaped, he could dull his eyes in an instant, to make the grin seem mean.

“I’ve got 8 brothers and sisters. Ive been getting contested possessions since i was 6 months old” Kmac sensed that Dimma had thought the same thing, except from a different angle.

(‘Kmac stops Fyfe, tigers probably win, we go to the bye 6 and 4. I could take the wife and kids to Noosa for the weekend’)

(‘I stop Fyfe in front of half of Pinjarra, They’ll forget who Harley Bennell even is. I’d probably win the rising star and renegotiate $1.5 for 3. I’ll be set’)

Both came to know exactly what the other was thinking. It didn’t get much more symbiotic. One of those things that works whichever way you look at it. The kind of decision a jelly fish can make.

“Alright son”. Dimma loved having arrived at the age and level of experience that licence you to call broad, tough men ‘son’

“I was gonna ask you if you’de like the job tomorrow” He set a grin free. The kid had confirmed himself as tough and self-assured in one knock and 3 words. That, combined with the rack and the tank, was why he’d drafted him.

“I would of said yeah” Kmac had a sense of humour as alkaline as bauxite tailings.