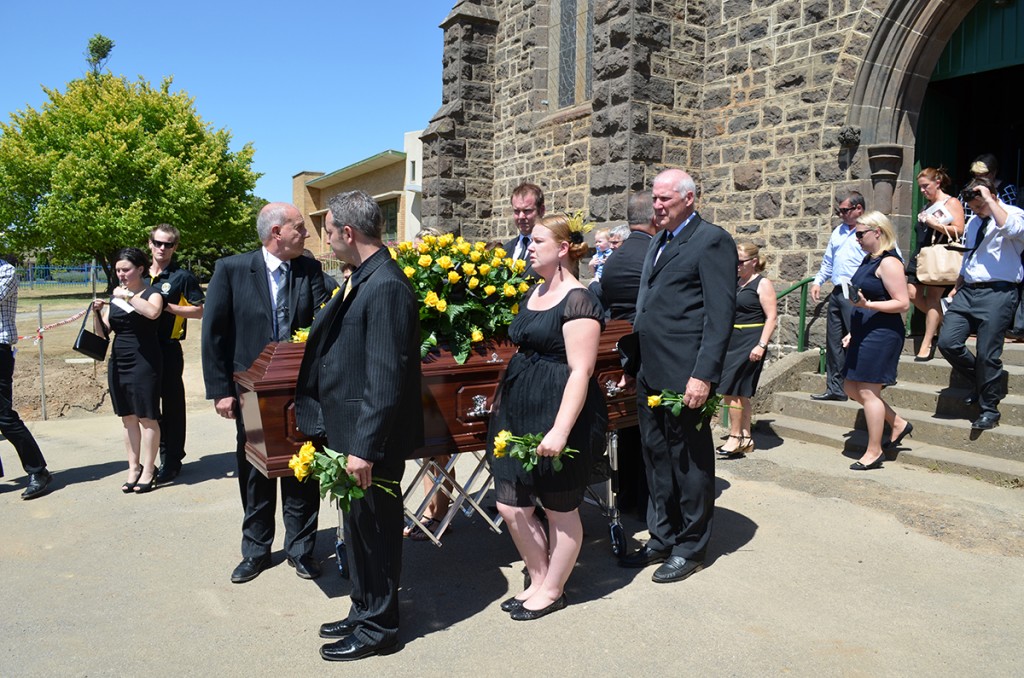 I caught a train north, through flat grasslands, stopping at Craigieburn and Donnybrook, passing a firewood yard at Wandong, on my way to a gothic bluestone church on a mercilessly hot summer’s morning. Headed for Kilmore, I wanted to find belonging on a heartless day, at the funeral of a woman I couldn’t know.

Her name was Carolyn Gaunt and in her life there was a story about football.

She was a Richmond supporter and had had cancer and I was told by her daughter, Alicia, that her coffin at the funeral would be carried through a crepe paper banner. Melbourne’s rituals of football life were to become a ritual upon death. I needed to be there. I wanted to be part of the crowd.

A cruel wind blew from up country, from a thirsty interior. It was thirty-two in the shade by nine. The air burned, searing with contempt.

Trout waited on the platform at Kilmore East. We met and he apologised for the colour of his wife’s car. The air-con in his yellow-and-black 1978 Holden Premier didn’t work, he said. We drove to St Patrick’s Catholic Church beside the gates of Assumption College – known for its fine footballers, some of whom I played against as a schoolboy – in a vibrant pink car.

On the way, Trout talked of Carolyn. “She always brought joy to everyone,” he said. “We were lucky to have her.”

Outside the church, on a gentle rise above Kilmore, labourers worked on rebuilding a road. Dust swirled in hot wind. Excavators grumbled. Inside, yellow roses rested on a coffin as men with rounded shoulders bent themselves respectfully into pews.

Most wore black, but there was also yellow: in the bouquets, and in ribbons and ties worn by many from Richmond’s cheer squad. They had come in carloads; as a family, a community, sharing in bereavement, saying last goodbyes.

Carolyn Gaunt (nee Palmer) was a Malvern girl, a first child with two brothers, born on 10 March, 1953. She loved the outdoors and enjoyed her sports: swimming at Harold Holt pool, tennis at Kooyong, being anywhere on the netball court. Her schooling was at St Joseph’s Catholic primary and Kildara Convent Secondary College.

As a young woman she worked for the Department of Agriculture and on weekends followed her mother, Brenda, to the football. After games she found herself often at Punt Road Oval where, in 1970, as a seventeen-year-old, she first met under-19s player Graham Gaunt. Two years later, in round 20 against Fitzroy, he played his first senior game for Richmond.

In the weeks before the 1976 season – and Graham having returned to Richmond after a stint with Oakleigh in the VFA – he and Carolyn married, in a union that bore two children and a home life at Brighton. Long after his playing days, the two of them moved to a farm at Springfield where she tended to her rose garden and, among other activities, worked with special needs children.

“Her other love was her Tiger family,” said Stephen Dale, giving a eulogy. “Every weekend she went to Melbourne to see her boys play, and on Wednesday nights she was at banner making where often she wouldn’t get home until one in the morning.”

Her husband was to move to Melbourne in 1978 where he played 69 games and kicked 32 goals in five seasons, but Carolyn’s stripes never changed. Once a Tiger, always a Tiger. Her heart remained true.

The parish priest, Father Grant O’Neill, talked of the question of death, and how the spirit of a person might become a story, an explanation, that could endure and be kept alive. He pondered: “There has to be more to life than football?” None under the vaulted ceiling offered a response. Most fanned themselves with a copy of the liturgy.

Vince Morton, a Richmond cheer squad stalwart, stood and said a prayer for many in attendance. “Lord, we ask you, on behalf of Carolyn’s family to watch over and keep safe her supportive friends and Tiger family.”

It wasn’t the time to ask for a premiership. Hearts were already heavy enough.

To the sounds of James Blunt’s ‘Goodbye my lover’, a montage of photographs of Carolyn’s life were screened – family portraits; wearing a Richmond blazer; standing in front of a 1973 Weg premiership poster; with Nick Daffy; holding up Richmond numberplates – and in the parched midday heat there wasn’t a dry eye in the church.

She looked a beautiful woman, loved by all who knew her.

And it’s true, by the front steps of St Patrick’s Church in Kilmore and under a fierce blue sky, in languorous heat and with the road workers’ heavy machinery for now stilled in respect, the Richmond Football Club’s theme song rang out and a crepe paper banner was raised. 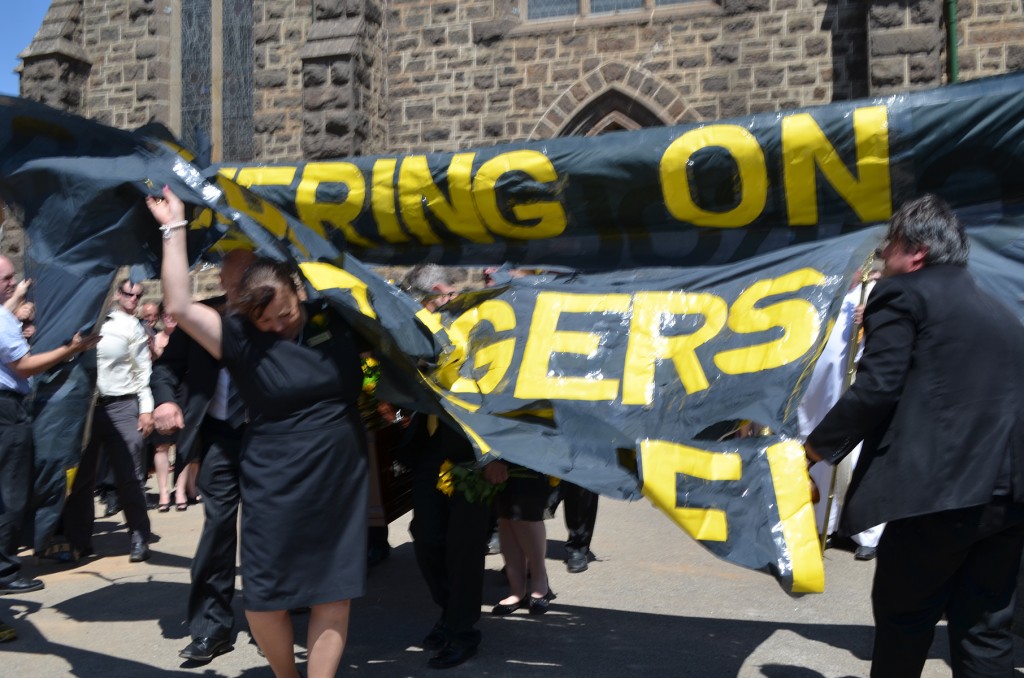 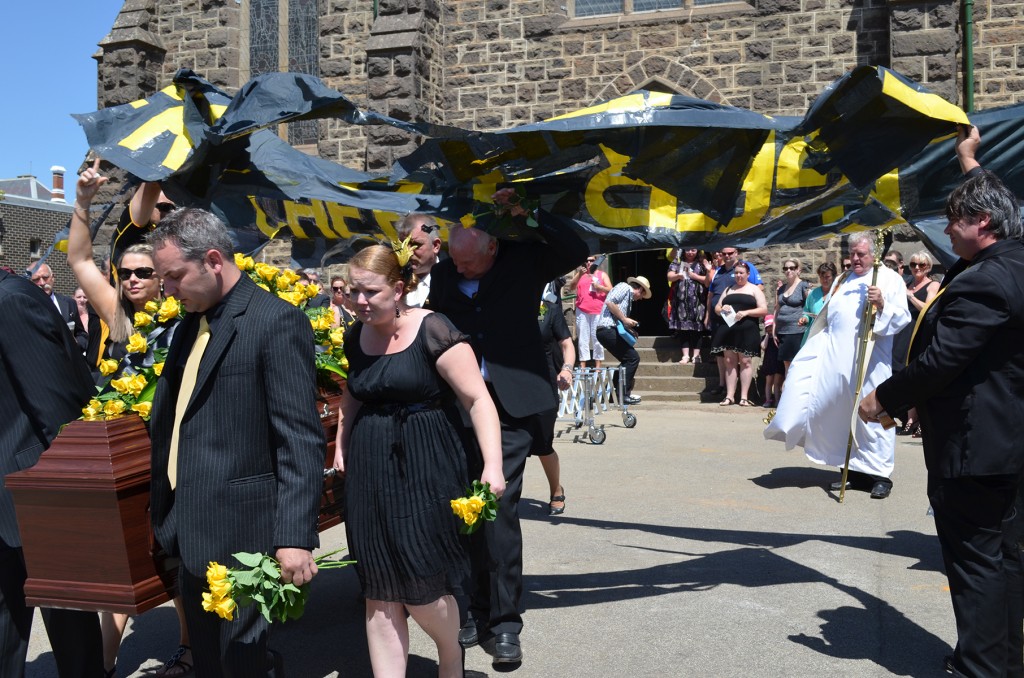 Between a bluestone arch and a waiting black hearse it was held aloft with august ceremony by her cheer squad friends. It meant so much for so many; this last walk of a Tiger, a last slow procession from the ground, the last rites of a fan.

A veil of black-and-yellow crepe paper, a passing – a deliverance – a home-grown memorialisation of death.

The priest in white robes swung his chained thurible under an unforgiving sun, blessing the scene with burning incense. Pall-bearers readied the coffin. A hot wind tugged at the banner.

And in a moment, in the tearing of paper, the crowd were as one and a death became life and life turned to death. And there was her epitaph, writ large, capitalised, in yellow, on a banner:

CHEERING ON THE TIGERS FROM HEAVEN. 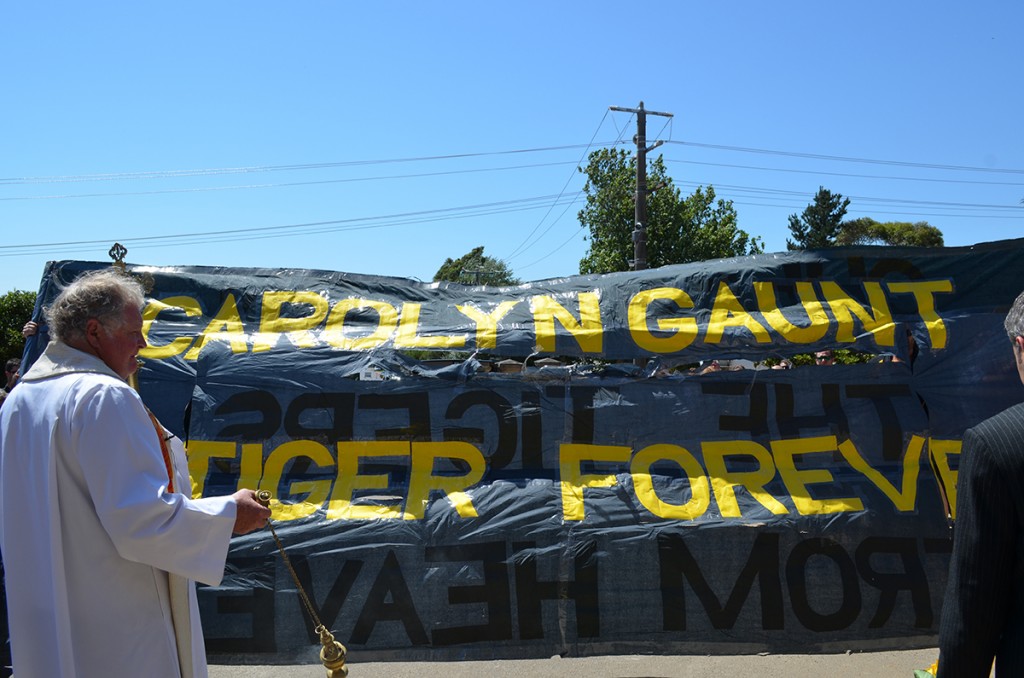 Carolyn Gaunt (10 March 1953 – 7 January 2014), was farewelled at a funeral service at St Patrick’s Catholic Church in Kilmore, on Tuesday 14 January 2014. Carolyn’s mother, Brenda Palmer, works at Coles in Malvern where Dugald Jellie often shops. He seeks out her check-out, wanting to talk all things Richmond.