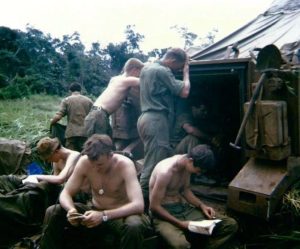 Fighting Tiger: Barry Giles (seated, far left with hat on), having a break at the rear of an armoured personnel carrier in Phouc Tuy province, the day after a battle and waiting to return to collect a compatriot’s body, 1969.

Last Monday morning I rode my bicycle to the front door of Francis Bourke’s house. Had a shave beforehand, out of respect. Looked up his playing stats on AFL Tables. I wore shorts, Richmond socks. Hoped he’d appreciate the touch. He did.

“Like the socks,” he said, on my way out, one cup of tea and almost two hours later.

We had much to talk about. Mostly it was about his father, and his involvement in WW2.

All last week I went looking for a Richmond supporter who had fought in a theatre of war. I wanted to talk to them about military combat, and a fear so few of us would know. I wanted to give them an opportunity to share their story. Inquiries to the RSL in Richmond and the city drew blanks. Several Richmond fans made contact who had been in the army, but none overseas in war zones.

I arranged to interview a former Richmond player whose father fought in Gallipoli, but at the eleventh hour he got cold feet. He said his father didn’t talk much about the war. Kept it all bottled up. He decided he’d feel uncomfortable discussing it.

Last minute, I put a call into St Francis, ask if I can come meet him. He says he’s be happy to help out. 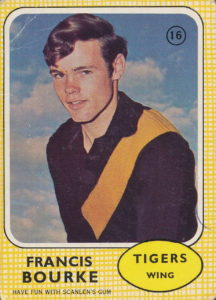 We talk about his father, about the family farm in Nathalia, about a grandfather he never met (“he was gassed on the Western Front, came home and died a shell of a man”), and about looking back and remembering all who have served in war. Then we talk about his newsagency days at Maling Road in Canterbury. Before he bought the business, as a schoolboy I did a morning paper round there.

We talk about Deano, who lived down the bottom of the hill in a weatherboard railwayman’s cottage. Everyone in the area knew Deano.

I stay up late Wednesday night piecing together the Bourke family story. It feels a privilege. Being invited into the private lives of others, entrusted to write their story, give it due respect, the right touch. In putting it together, I learn about Nathalia, and Oxford aircraft, and WW2 training bases, and Bomber Command, then skirt through the history of the Western Front.

My head spins. So much to tell, trying to squeeze it all within a readable length. I email him a draft. He says he is very appreciative I’ve what I’ve done. It makes me feel good. What I can do means something to others.

Francis Bourke was a hero of mine, but truth is, I was looking for someone else.

I wanted a Vietnam Vet, or someone who had fired a shot in Afghanistan. Not because I want to glamorise war, but because I wanted to make sense of first-hand experience. I wanted something raw, something where you might still feel the hurt.

Writing stories about fans has given me as much pleasure as I hope it has given those who I interview, and their families, and all who might read them. I have made wonderful connections and friendships. In my mind, it’s become like a family, all brought together with the common twine of football, and Richmond.

The game, it can do so much good.

How do I find those I interview? It’s an organic process, really. Some are recommendations from others. Some put their own hand up. Some I hear about, read about. Word filters through. There is no set formula.

Sometimes the best stories come from the most unlikely sources. I met a man at Launceston Airport on the Monday morning after the disastrous Friday night game against North in Hobart last year, both of us had been stranded on the ferry overnight, marooned by the floods. Barry Giles is his name. I introduced myself, wrote down his phone number, looked him up, told his story. 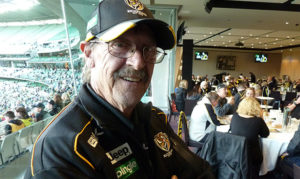 Inner sanctum: Barry enjoying the trappings of coterie membership at half-time at the MCG, in the recent game against the Gold Coast Suns.

I’ve been thinking about Barry Giles all week.

What I wrote about him, I’ve republished it below.

And if anyone know of any Vietnam Vets who barrack for Richmond and might want to share their story, please, do send them my way.

Barry Giles is in the departure lounge at Launceston Airport, the Tuesday after Richmond’s Friday night loss in Hobart, waiting for a flight home. He caught the ferry to Tasmania and like many others his return journey from Devonport was booked for the Monday night.

Then the heavens opened, the Mersey flooded, moorings broke, boats sunk in the harbour, the ferry was cancelled, and a band of Richmond supporters were marooned with their cars on an island.

Adversity, it brings a crowd together. Barry was at the airport, wearing yellow and black, two colours that for people like us open a conversation, and he tells a story of football and being in Vietnam during the war, and I’m all ears, knowing not where it might end.

Every Richmond fan has a story to tell. After a season’s half-time break, what follows is but half the story of a man named Barry Arthur Giles.

Born in Richmond at Bethesda Hospital on 29 September 1949 – the year Jack Dyer played his last VFL game – he was the third child to Ernest and Beryl Giles, who met when working at the Bryant and May match factory on Church Street. “Dad was born into Richmond, too,” says Barry. “It went right through the family. We’re all mad Richmond supporters.”

They lived in Coppin Street and Barry’s older sister regularly visited Jack Dyer’s milk bar for sweets. She recalls games at Punt Road Oval played after the factory whistles stopped on a Saturday afternoon, when it was time for the football.

The family later moved to Springvale, where Barry left school at 14 to work in a firm making boat propellers, embarking on life’s great adventure. “I left home at 17 and went up to Mildura picking grapes,” he says. “I missed the 1967 Grand Final, was up there working for a winery.”

Two years later, two days before his birthday, Richmond won its second premiership in the Hafey era but now he was thankful to be alive.

Barry Giles enlisted in the army when he was nineteen. A war was on and he lost a job in a printing factory in Moorabbin and went to try his luck elsewhere. In June 1969 he was deployed to Vietnam, as part of the 1st Australia Task Force stationed in Phuoc Tuy Province, south of Saigon. An infantryman, his platoon was later led by another Tiger, the then-lieutenant Peter Cosgrove. 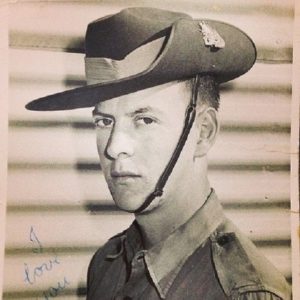 He was only nineteen: Private Barry Giles in 1969, before departing for Vietnam.

On night patrol in a rubber plantation on the eve of the 1969 VFL Grand Final, Barry’s unit was ambushed. “It was the first time I’d been in a fire-fight or had contact with the enemy,” he explains. “We had no idea what was going on, but we stayed and survived.”

Australian armoured corps picked them up in the morning and took them to a makeshift base where Barry found what had been on his mind all night: a radio, and a broadcast of a game. “Richmond were playing back home and all I wanted to do was listen to the grand final.”

After his tour of duty, Barry left the army in 1971 on a medical discharge. Like so many of his fellow soldiers, the war had shaken him about. “I drifted away from the Richmond footy club, from the game, from what was a family.”

After a series of jobs he ended-up at Grassy, at a road’s end on King Island, a place half-way between here and there. He bought a little business selling newspapers; taking time out to find out which way the wind blows.

One morning he drove up to the island’s airport to pick up a bundle of papers and his son, David Giles, was front page news in the Hobart Mercury. A star footballer with Clarence, he was selected by Fitzroy with the second pick of the 1991 mid-year draft.

“He played with Jack Riewoldt’s old man, they called him ‘Cabbage’, and he also played against a young Matty Richardson,” says Barry. “He was a goal-kicker and moved to Melbourne but then my brother rang me one day and said he’s walked out on the club.”

For two seasons now Barry – who lives in Inglewood, a town on the Calder Highway north-west of Bendigo – has been back at the football. The return was prompted by his brother’s death, aged 71, from asbestosis. “He was a boilermaker and a mad Richmond supporter like the rest of us,” says Barry. “Near the end of his days we started talking about getting back to football again, the two of us, because Richmond were starting to come good again.”

In his brother’s absence, Barry has made good on a promise. He returned to the fold as a member, joining the club’s inner sanctum coterie group and sponsoring a player.

“I love this club, I loved it when I was younger and I’ve been gone for a while, and it was time to come back, but in a different way,” he says. “I saw that they drafted Daniel Rioli and I remember watching his great uncle play and I saw the footage of Daniel and I reckon he’s got something so I put my hand up to sponsor him.”

And three weeks ago Barry returned to Tasmania for the first time in nine years, to visit his son and daughter and all the grandchildren, and catch up with old friends from King Island, living now at Ulverstone on the north-west coast. And he went to the football.

All Richmond people at the game could never forget what a heartless night it was. But the result has not deterred Barry and his returned love of the club. “I’ve seen the Tigers in their heyday and you can’t forget that,” he says. “I’ve seen some magic games, I followed them all through the 60s, 70s and 80s and there’s no reason they can’t return to the glory times.”

POSTSCRIPT: After the Gold Coast win last Sunday week, Barry booked into a hotel on Spencer Street, caught a bus to the airport in the morning, flew back to Launceston, picked-up his car and drove it to Devonport, where he brought it across Bass Strait on the Monday night ferry, then returned home to Inglewood. And he’ll be back in Melbourne on Saturday to see Richmond play the Lions at the MCG. 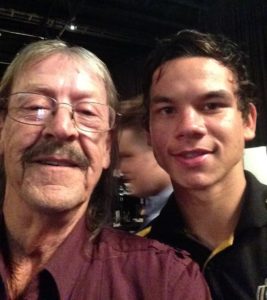 Giles and Rioli: An old soldier with a young Tiger. For all TTBB readers who were hoping this week I was going to write about Daniel Rioli’s hair, apologies. The story is on hold. My missus says just let the young man play football. But the day he kicks four goals (or if we beat Adelaide in Adelaide) the story is coming out. Working title: The heir apparent. All other suggestions of who should be in Richmond’s greatest-ever hair team gratefully received at contact details below.