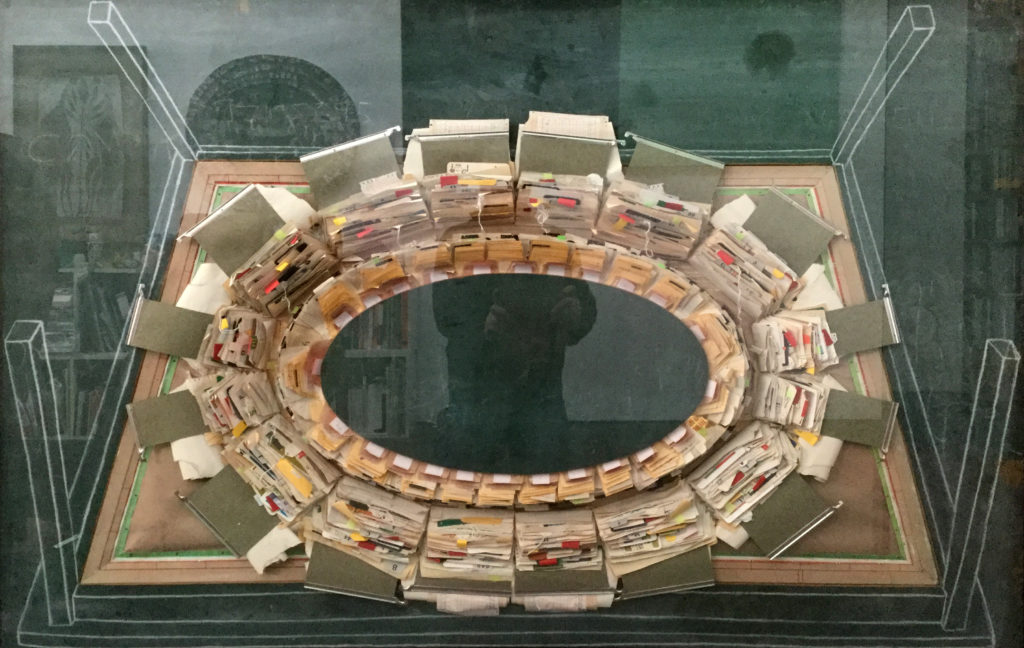 Part of the dazzling art collection at Andy Fuller’s place. This is Decision Boundary by Mat Greentree, mixed media 2005.

I came over from Hobart last weekend for a big hit of footy. I got to four games, six footy grounds, spent time with TTBB colleagues Andy and Dugald, and spent a night in Richmond for the first time in my life! As a bonus on Monday I also met footy artist and dedicated Tiger, Kate Birrell.

I lobbed into town on Saturday, and headed into Richmond to find Andy’s house. I had not looked at the map to locate it until I was on my way there; it is closer to Richmond Station than parts of Richmond Station! He lives in a currently closed art gallery, architecturally fascinating. I rang him when I was outside as I couldn’t find the front door; suddenly a section of wall pivoted and he invited me in, to meet his partner Nuning and and his daughter, Cahaya. 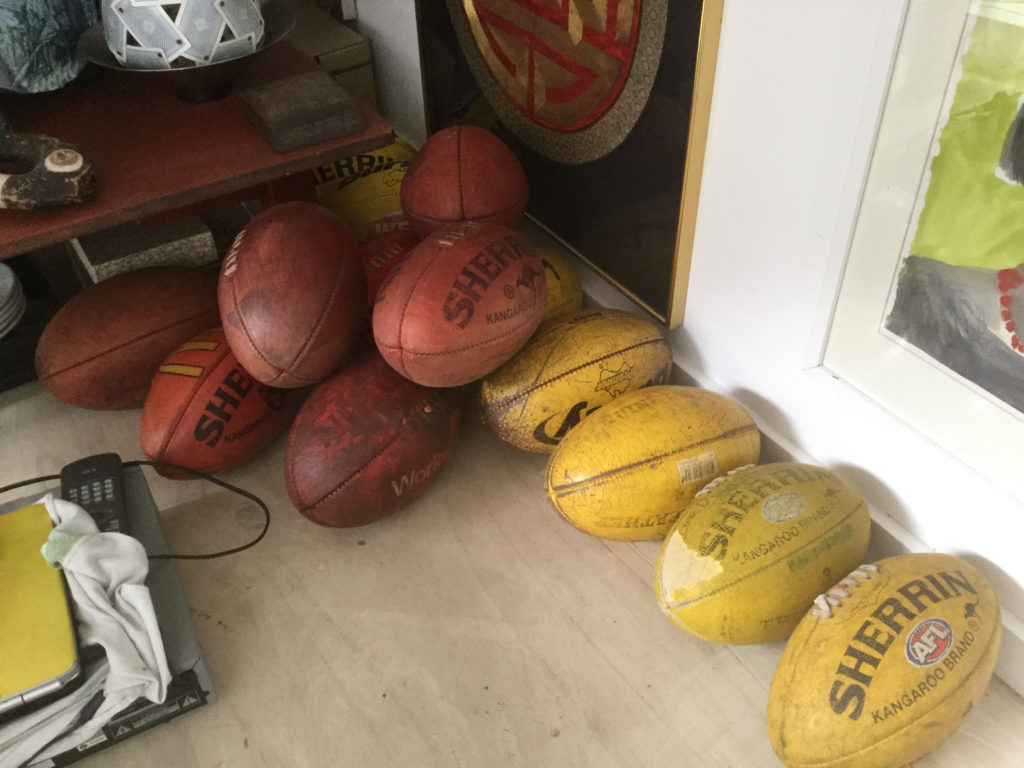 Lost footballs have a way of finding Andy

With little delay we headed out to visit Brunswick Oval, former VFL home ground of Fitzroy. The club name and jumper survives now in the amateur VAFA, with their flagship team currently in Premier B division. They were trailing Parkdale Vultures in a battle to avoid relegation. The footy was open and quite skilful; to my eyes the main difference to a level like Tasmanian State League is the body shape; Fitzroy and Parkdale players were Matthew Lappins to the TSL’s Lance Whitnalls. 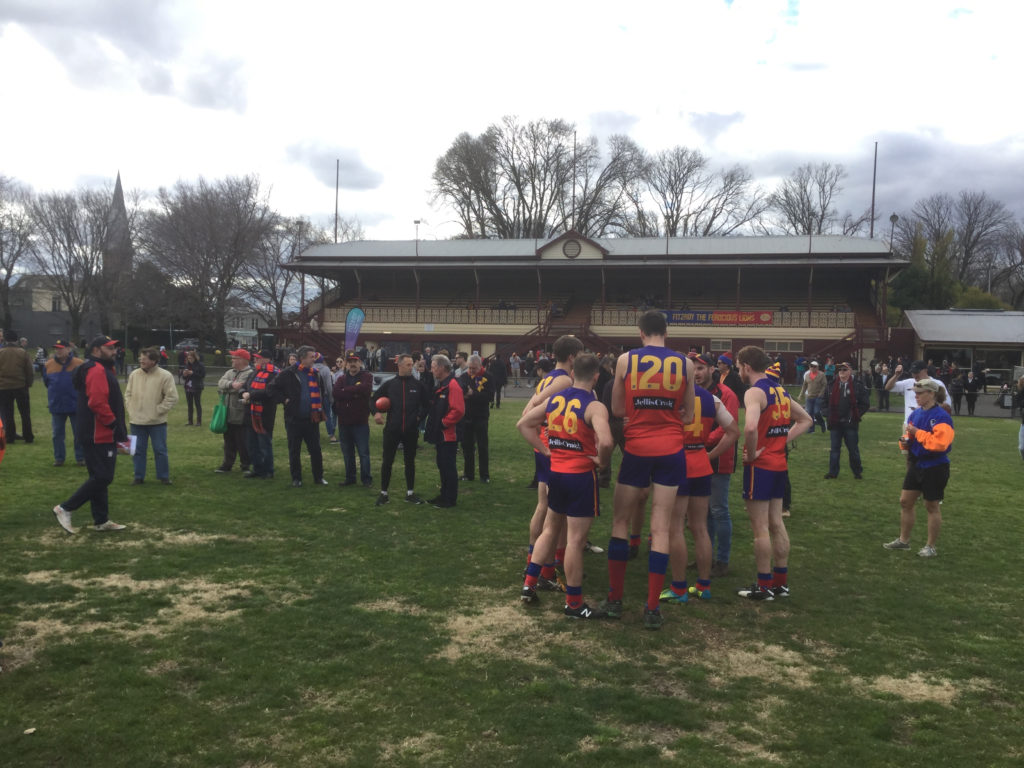 Both hallowed and scruffy, the turf at Brunswick Street Oval declares that this is very much a public access park. 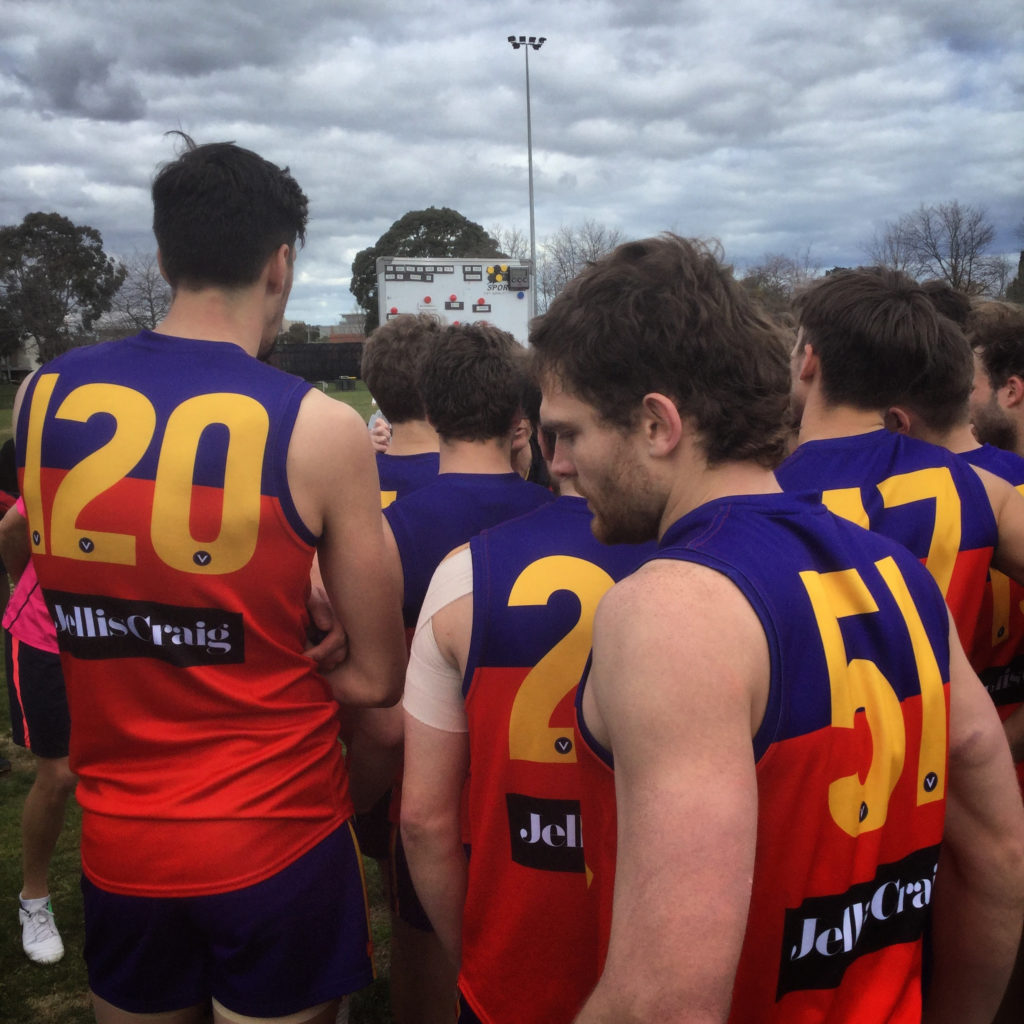 The coach addresses the players. His message was: “You’re better than them, why don;’t you play like it? If blokes are leading to dumb places ignore them! Ignore them!” 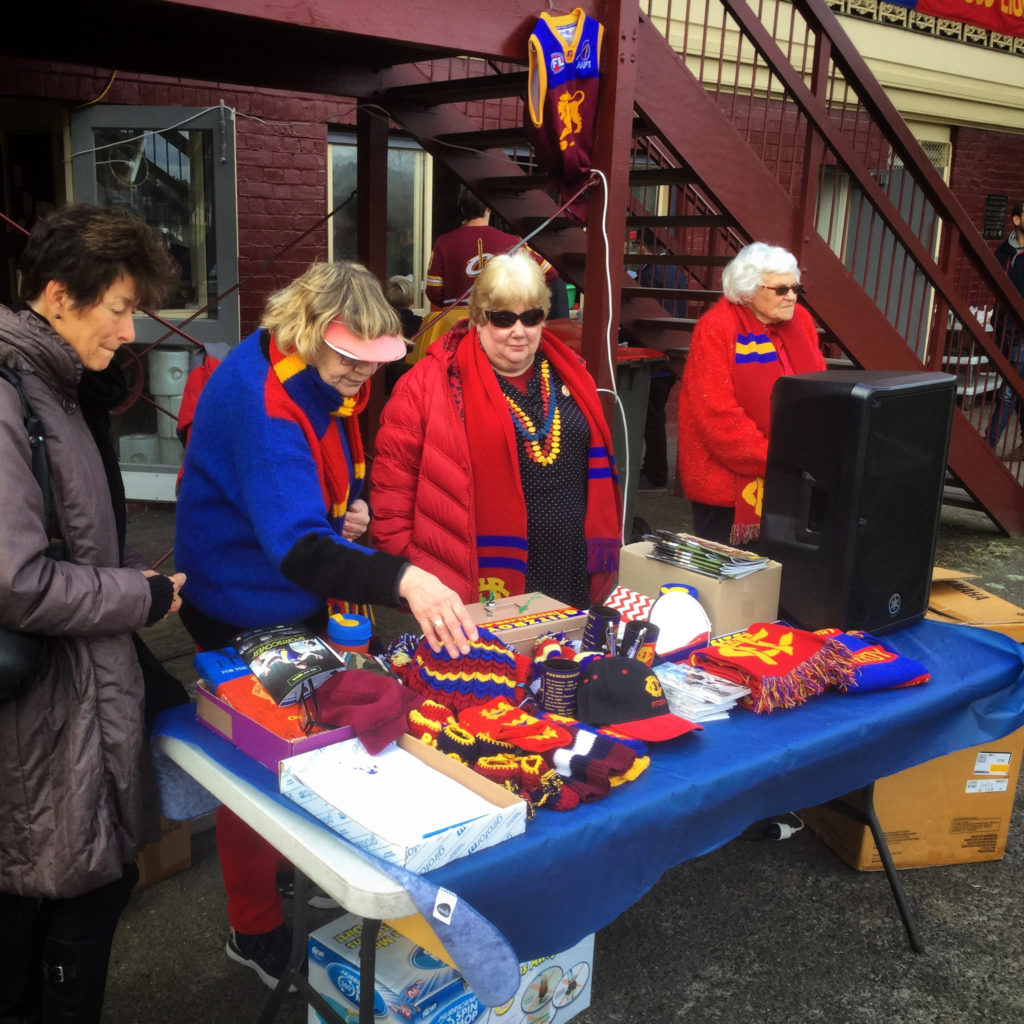 The Fitzroy ladies are happy to sell you a book, a pen, fingerless gloves, a scarf or a hat; in either colour-TV era Lions’ primary colours or classic Maroons’ maroon. 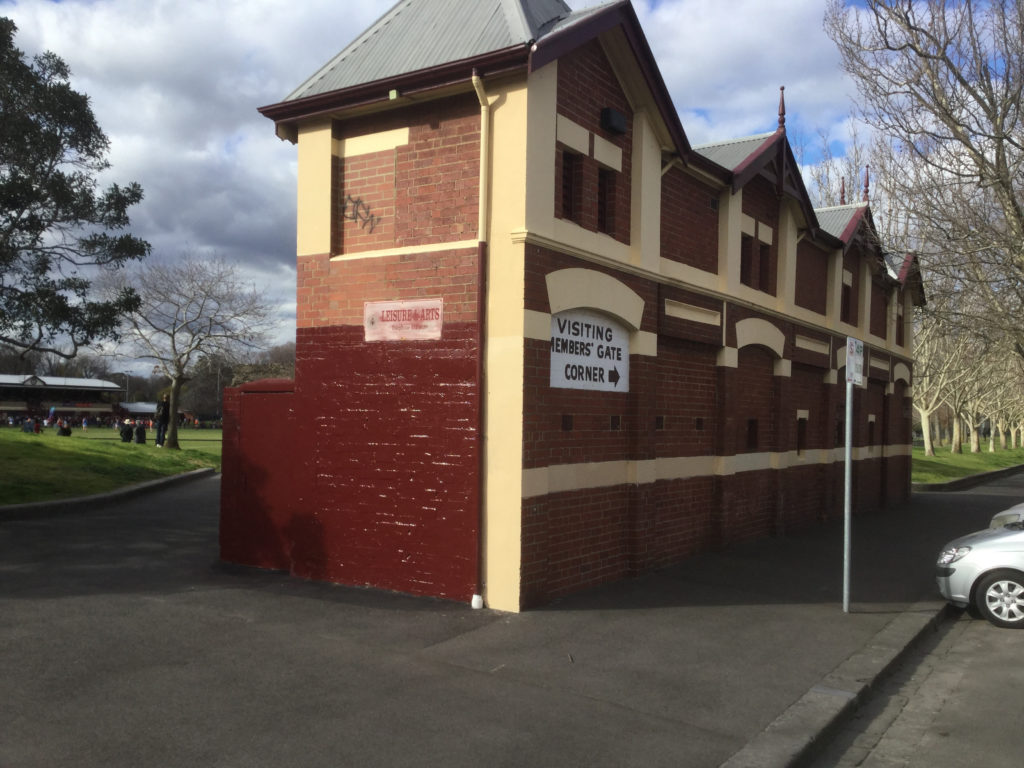 I am happy to be living in a time when a skerrick of good sense preserves things like the Vic Park and Brunswick Oval gatehouses.

There was a healthy crowd on the hill and in the grandstand, and big queues for the burgers which are reputedly the best in Melbourne. Time for a shoutout here to Nicko Place who lives just up the road and will definitely be on the itinerary next time. The VAFA is a dry competition, which is really interesting, and possibly news to the youth who rode up on a bike balancing a slab.

We took off during the third quarter to have a look at the Whitten Oval, once Footscray’s VFL home ground, and now again “Footscray’s” “VFL” home ground through the contortions of crafty re-naming. A shoutout here to @theholyboot and @FMI who live nearby and will also be part of the next footy trip.

We got lost on the way and so by mistake drove over Mount Mistake, twice. [The overpass on Geelong Road that looms at the North end of the ground is traditionally called “Mount Mistake” by old time Doggies fans.] 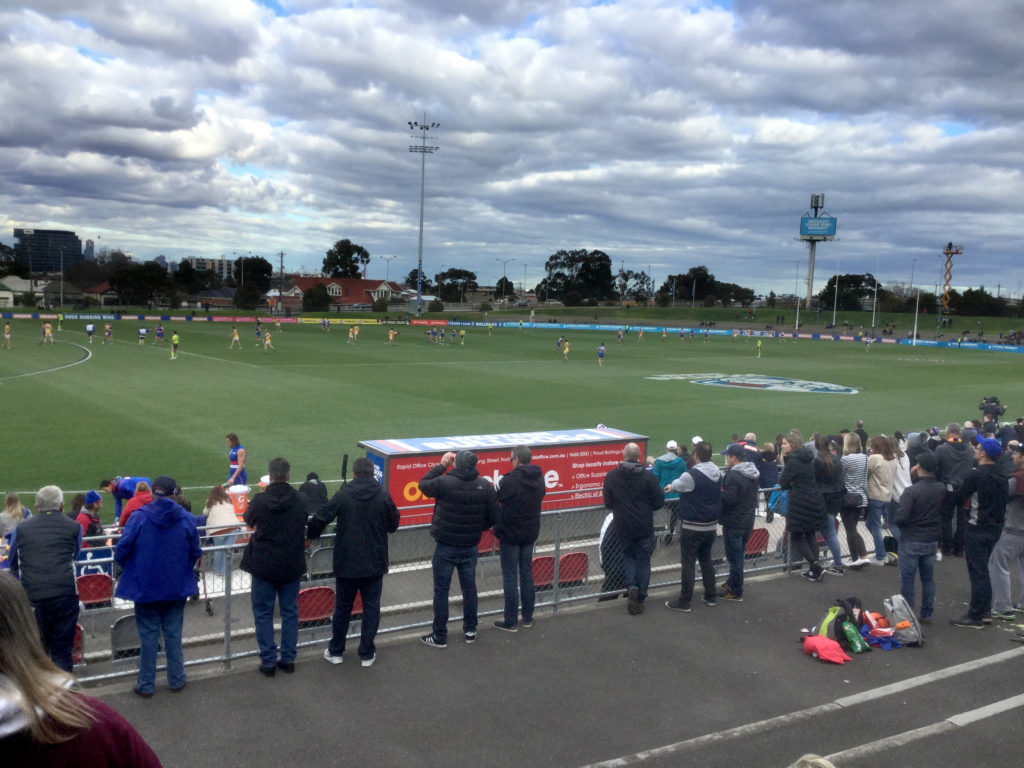 Footscray were hosting top-of-the-ladder Williamstown, and Willy were doing as they pleased. The AFL Bulldogs’ season as reigning premiers came to an end on Friday night, and I was expecting the place to be full of misery, but people were generally looking bright and Barkers Cafe was busy.

We went to the northern goals at three quarter time. We didn’t take a ball, and Andy suggested we grab one from the official Tub Of VFL Balls. A young man of about 12 in a Bulldogs guernsey said politely but firmly that we couldn’t use those balls, sorry. Well done that lad. We dedicated ourselves to marking and turning everyone else’s shots at goal. 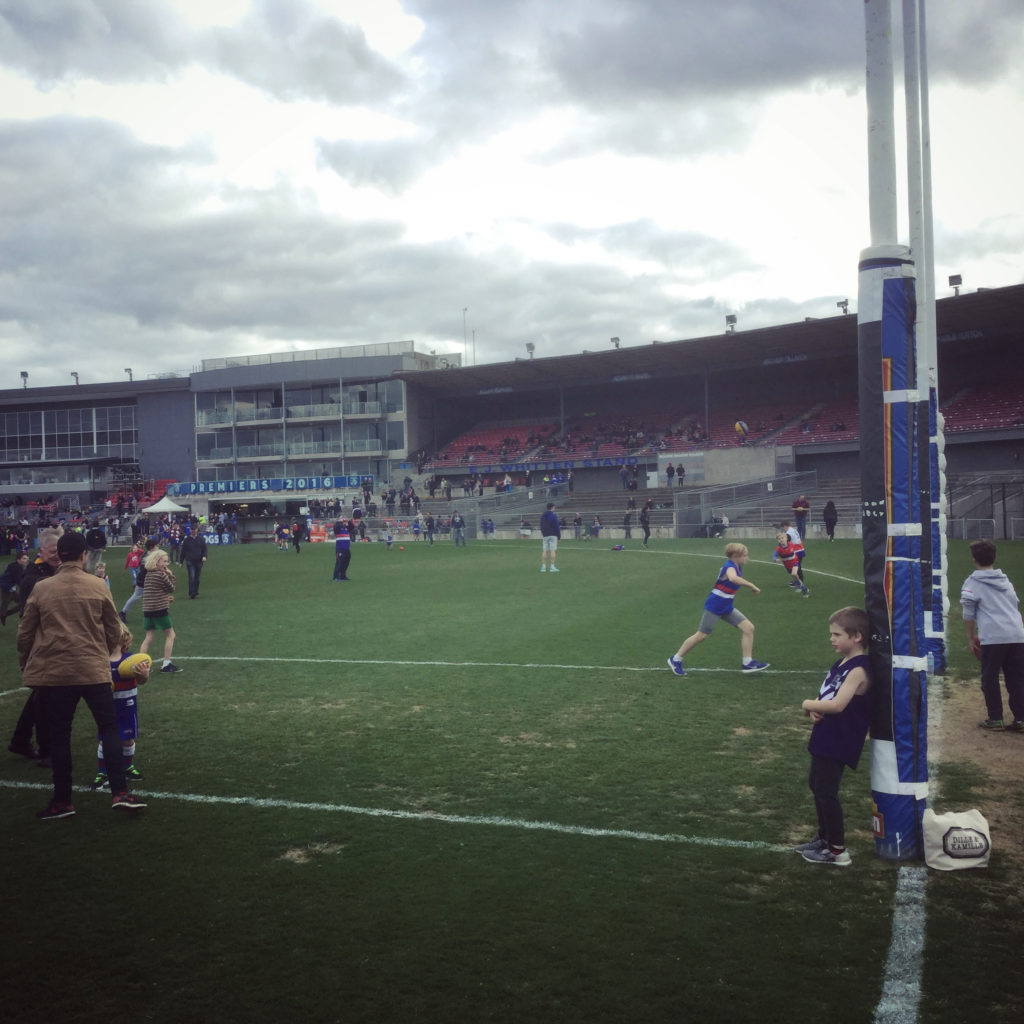 Three quarter time at Whitten Oval. At the top of the square, a very recognisable member of the Holy Boot extended family.

We watched the last quarter from the southern end near Mount Mistake. The Dogs were nowhere near the Seagulls, despite fielding quite a few big bodies with AFL experience and premiership medallions in Tom Boyd, Clay Smith and Tory Dickson.

A huge thanks to Andy for taking me on this pilgrimage because the traffic was frankly dreadful and my reading of the Melways not as fluent as it once was. We battled back to Richmond, and the perennial quest for a parking spot. Then we had an outstanding Thai takeaway, and I retired to my room full of art. 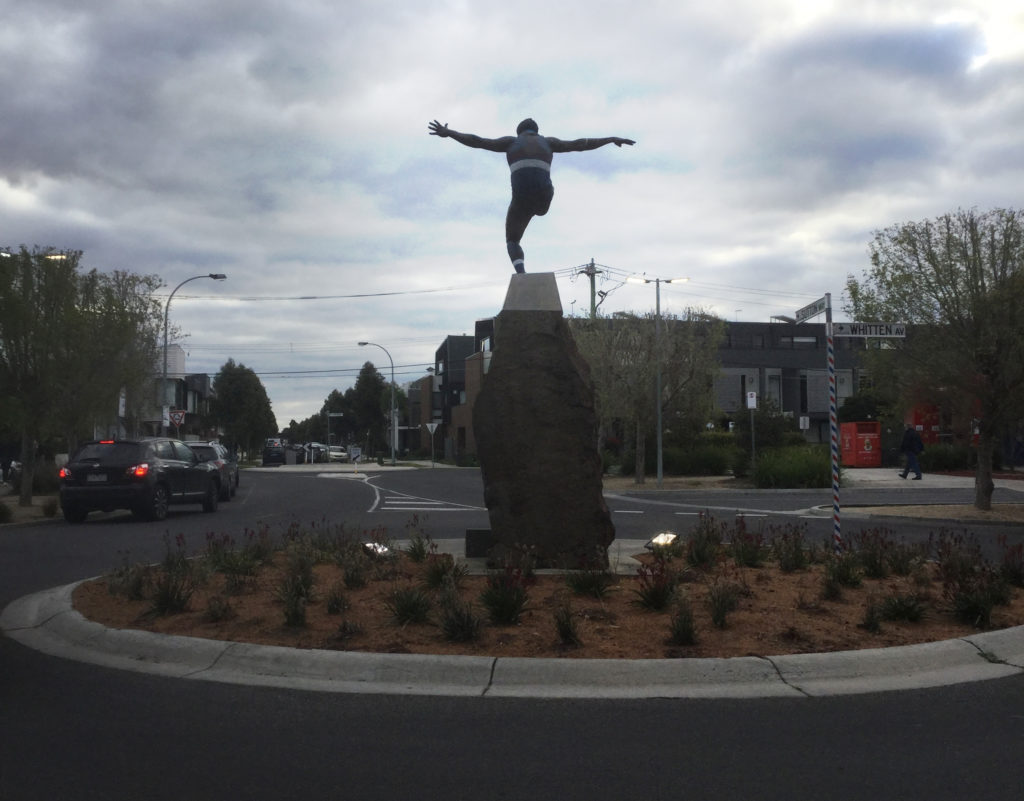