“That’s a lot of fanfare, it’s putting the pressure on,” says Katrina, a Hawks fan and one of my football companions on this day, as the sound of jungle drums echoes around the cauldron of the MCG before Richmond enters the fray. “Still, guess it’s better than the Collingwood break dancers.”

Eight minutes into the game, and with the Tigers pulled-apart so demonstratively by the Hawks, her appraisal is no less succinct. “This is starting to feel like Hawthorn-Richmond.” 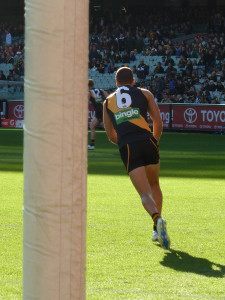 Warm-up before the bounce: the much-maligned Shaun Grigg (who I thought played a fair enough game on Sunday).

Forget the anomalies of the past two seasons; in the first half of the first quarter with the sum total of our forward inside 50s being a ball kicked along the ground by Jack, here was an afternoon shaping as an embarrassment. Hardwick had spoken midweek about a need to play big in big games. Here we are again on centre stage at the MCG, and again all our hoped-for lines are fluffed. All that flattered us was the score line, courtesy of their missed chances.

David Hale (“the oldest looking 29-year-old guy you’ll ever see,” says Katrina) out-marks the younger Troy Chaplin, and a pattern is set. They look to have more players in their backline, and their forwards look looser and to be running everywhere.

The Richmond crowd – like our players – falls silent before such a lopsided equation, with its ring of familiarity. Oh, how it’s unravelled so quickly, how the house of cards has tumbled.

Such a beautiful autumn day, it seemed ruined by a game of football.

And then hard in a pocket, Jack taps one back, and Dusty picks up the loose ball and fends off two of them and kicks a goal around his body – into the crowd at the Punt Road end – and he’s a blaze of tattoos in the glistening sunlight, and all this misery for this fleeting moment is worth it.

Soon after the siren sounds – like a bell to relieve a punch drunk boxer – and Andrew, another Hawk and another companion on this day, turns and says: “I’d take that, two goals down.” He’s being generous. The balance is two goals, seven other scoring shots, the weight of possession, and all the hope. 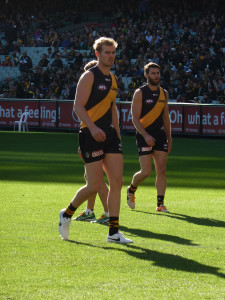 The halo effect: our man Dave, a fund-raising effort for the Dave Astbury Appreciation Society soon to be announced.

Earlier in the afternoon, I had seen the colours on the station platform – so much gold glimmering in clear autumn sunshine – and I had known there was someplace I needed to be. I enjoy this delightful prospect before the game. The rituals of dressing. Leaving home. The stride to the station. The standing huddle of disparate supporters on the platform, the teasing anxiety; all up one end, readying for the exit ramp at Richmond station.

The train arrives, the day’s principal activity beckons. Young children clutch and spin footballs. Fathers are noosed in scarves, in anticipation for the late afternoon chill. Women have packed rugs in team colours. All of us know the air will cool. Winter is coming. All that is uncertain is the outcome of this day.

At 4.25pm during the halftime break, the sun thankfully tilts below the Members’ Stand and the afternoon can only get better. ‘Selfies’ are screened on the scoreboard – it’s a commercial imperative (“post a photo of you and your Bingle sticks”) – and I wonder at all the ways a football club can commercialise the experience of being barrackers. Never have I seen so many iPads at a game; I know we are playing Hawthorn.

Cyril Rioli kicks a goal in the first 30 seconds of the second half, then Hale marks in front of Chaplin (again), and they have two goals in less then two minutes and the afternoon is gone.

How many marks has Shaun Hampson taken?

I see by the day’s end the rude answer: none. The team’s tallest player, a touted gun recruit over summer, and for the second week running he manages to take not one mark in two hours of football. We have a problem. He is paid good money to play football, but it’s hardly a performance to pay good money to see. It is a statistic that should rightly haunt him: two games, zero marks. How can a club justify this return on investment?

Troy Chaplin doesn’t even look as though he wants the ball. He’s out-positioned and out-marked all afternoon by Hale (eight marks, one contested, two goals) and Ben McEvoy (six marks, one contested, one goal). His leads when we move the ball so painfully slow from defence look, at best, half-hearted. The ball slips through his hands. But worst of all, his shepherds don’t even make body contact with opposition players. He is playing with no conviction. His confidence is in ruins. How long must we wait until he turns it around?

Cyril makes us look like fools. As does Bradley Hill. And I wonder why our recruitment of Aboriginal players has for so long been so lacking or mired by failure. I’m pleased for Shane Edwards when he kicked our first goal. But the long view is that Richmond – unlike Port Adelaide, unlike Hawthorn, unlike Sydney, unlike Essendon, unlike Adelaide, unlike West Coast, unlike Fremantle, unlike others – seems not to have created the culture, or chosen to have created the culture, where young footballers from other cultures can grow and thrive.

“Think it’s all downhill from here,” says Katrina, late in the third. “Like really downhill, like the handbrake’s off.” 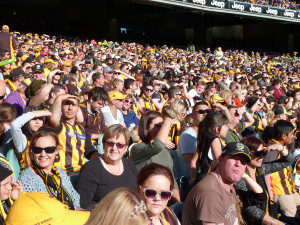 The three-quarter-time promotion of the Tigerland Superstore sounds hollow. Blah, blah, blah. What an inopportune advertising time-slot. Why must football clubs insult our intelligence like this, and why must they seek to so loudly occupy and commercialise the cherished quiet time in football? Do they think we cannot amuse ourselves with conversation and catch-ups? Is our attention span that short? Any vacancy, and they choose to sell the space.

The day’s inequality does not abate in the last stanza. A farcical score review helps only to prolong our agony, and embarrassment for Steve Morris. We all get to see his error again, in slow motion, on the big screen, paused. He was incapable of rushing a loose ball across the goal line. It encapsulated his afternoon. Plenty of desperate acts – all flailing arms – that seem as papering over cracks. He’s caught too far from the contest, from his man. He looses his footing. He clutches at his shoulder, grimacing.

How the fairytale turns sour so quickly. As with Chaplin, his partial defence might well be that the ball was so often and regularly found in our defence. 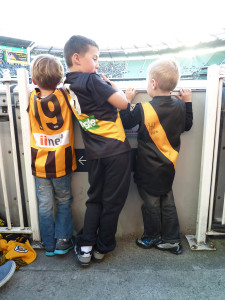 Sitting on the fence: Two Tigers and a Hawk, at quarter time.

I get up to leave early, just as a Richmond pitch invader also makes a run for it. It is a moment that’s both comical and saddening. In my Book of Feuds for this game against Hawthorn, I said I would streak naked across the MCG if I thought it could rid us of the curse of Helen D’Amico that seems to have afflicted our club since the third quarter of the last game played in the 1982 season. But never did I expect this.

We needed an extra man in the backline, but not this bloke. He made a lead, then stopped, crouched, surrendered. He gained not one possession. Then he was tackled, and carted off the ground like a sheep.

Dave Astbury, forever the gentlemen, and I think maybe the son of a shearer, fetched his belongings and put them aside. He could read the situation. He could understand the frustrations, however misguided.

The station platform at Richmond is filled with yellows and blacks, with our colours, that now look so dull in dusky light. Many had thought better of the day. There is something to be salvaged in making it home for the evening meal.

Sunday night and I am disturbed by what has happened. Trust and belief seem to have broken at our club, so quickly and readily after the dream of last season. Trust between players. Trust between coaches. Trust between fans. Trust within the club. Trust in football. Trust in something we hold so dear.

Are we living a lie?

Long into the night I make a mental list of those players of ours who on Sunday I know I trust.

I trust Trent Cotchin, and was pleased to see he was first to disparage Josh Gibson for crudely cannoning into Reece Conca. I trust Brandon Ellis, because he is our future. I trust Dave Astbury and Ben Griffiths, because of what they’ve shown this year. I trust Nick Vlastuin because everything about him says outstanding citizen (courage, leadership, humility). I trust Jack Riewoldt because he hurts, and shows passion, and gives us a spark, and kicks goals, and has pride in his performance. I trust Bachar because I love Bachar. I trust Ricky Petterd because, despite the errors, he looks always to put his body on the line. I trust Daniel Jackson because he has mongrel in him. I trust Dylan Grimes and Reece Conca because they are still finding their way.

It’s not that I don’t distrust all other players, but for whatever reasons the contract between this fan and those players is not watertight. It is still to be proven, or to be re-established, or re-configured. I would delight in being shown to be wrong. 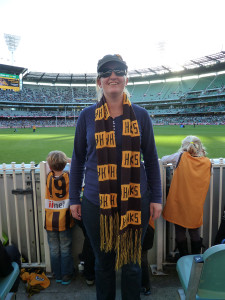 A good Hawk: I sat with three dear friends on Sunday, all Hawks, including Katrina, a good wit with an open love affair with Luke Hodge (despite her partner, Dave, being an anguished Tiger, and a good man in a crisis).

And for me, the unwritten social contract between a fan and our coach, and a club and its administrators – the custodians of our shared history and communal passion and common dreams – has been strained also.

Performances like that offer so little confidence, so little reason to believe. Again, I would delight in being shown I have misread the situation.

Nothing much has worked this season, despite all the false bravado. We have been shown to be pretenders, again. Ours is not the football club we hoped it to be. Look at how Hawthorn goes about its business of recruiting, and nurturing and getting the best out of its players. Look at how Port Adelaide has lifted itself from its mire with an honest work ethic, and now is taking Matty White along for the ride. He kicked two goals against Geelong on Sunday night.

We’ve missed his run-and-carry. We look so slow and ponderous and uncertain. We look a shadow of the team that beat Port last year, that ran rings around West Coast away, that worked over Fremantle in an arm wrestle.

When Brett Deledio, mid-way through the last quarter of this season’s first game, against Gold Coast away, kicked the ball away in anger and frustration, after a loping Tyrone Vickery pass, the result was more than a free-kick against. It looked as if trust among the playing group was broken. There was discord. There is nothing more damaging to team morale than disunity. Our season has looked as good as broken ever since.

Our dreams are broken also.

Tiger Tiger Burning (not so) Bright