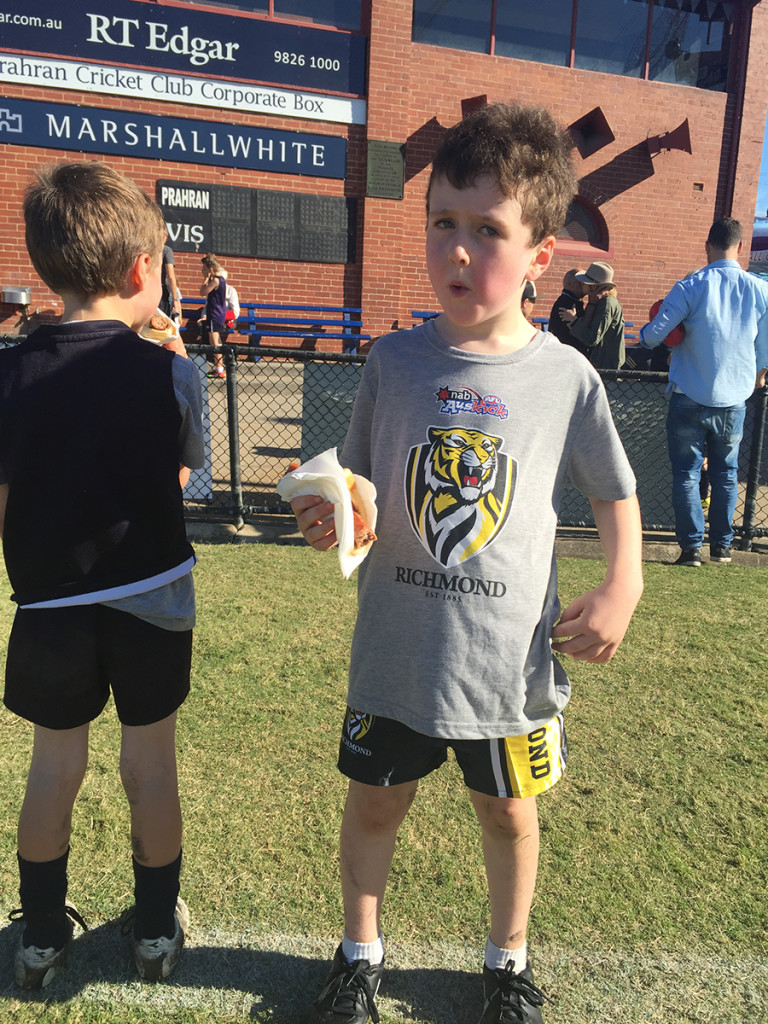 Future Richmond Centre Half Forward: Mr 6yo, with muddied knees at Saturday morning AusKick, with his Bluebagger friend whose team look to be going in the other direction.

Last Friday night I went to the football and took a notebook and did something I’ve not done for the three seasons. I wrote nothing in it.

I went to the game, watched and barracked.

I was late, anyway, waylaid by a family dinner. The train carriage was almost empty. I ran from the station, through Yarra Park, and the crowd sounded quiet, muted, and I wondered about the noises of a game. I stood alone and watched the second-half of the second quarter, and was proud of our team – depleted, war weary, lambasted, abandoned – and determined at half time I would find my way to the players race to cheer them off. I wanted to offer praise, encouragement.

And cheer them off I did.

Every player would have heard me, it’s impossible not to. I’ve played football in rough-boned country towns, hard places, where they know how to cheer. This is no time for politeness.

I told each and every Richmond player they’re up to their necks in it.

I told them to jog off the ground.

I told them to lift their heads.

I told them this game is alive, it’s wide open, it’s there for the winning.

I told them to get over the line. 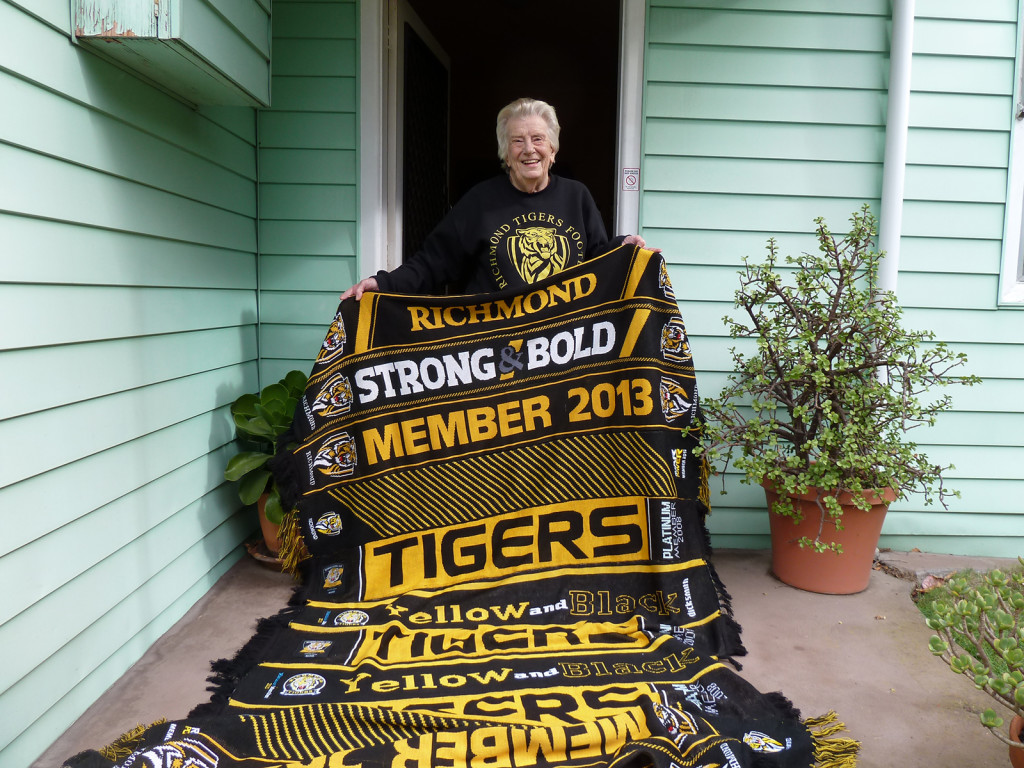 Tigers of old: Brenda Palmer, 84, on her front porch, holding up her colours.

Saturday afternoon, I promised Brenda I’d fix her front gate. I interviewed her the previous Sunday, after the loss to Port Adelaide, after all of us were bereft, and she made me a cup of tea and offered wise words, and in her hospitality there was comfort. She’s a beaut old bird, Brenda, 84, still going strong; the “oldest checkout chick” in Australia she calls herself, an inspiration for many. I first met her at her daughter’s funeral, at a table with other staff from the supermarket she works at. I’d seen her also, with various friends, getting off the train and walking up the station platform, late at night, in her colours, after a game.

She goes to every one of them in Melbourne, you know. She says she could probably count on one hand the number of games she’s missed in the past forty years.

When I opened her gate on that Sunday morning, it needed to be lifted a little to pass the latch. She said it’d been like that for a while. I said it was annoying. She agreed. She starts work each weekday morning at 6am, walks a few blocks to the supermarket, and I didn’t like the thought of her having to lift her gate every morning.

Sunday afternoon I rode my bicycle to her place, and took the gate off, and drilled through the screws and fiddled about, and rode off to a hardware store, and came back, and tightened new coach screws and the gate was fixed.

She said to me: “When you get to my age things don’t need to last for twenty years”.

I told her, Brenda, this will last for 20 years.

My job has a guarantee on it. 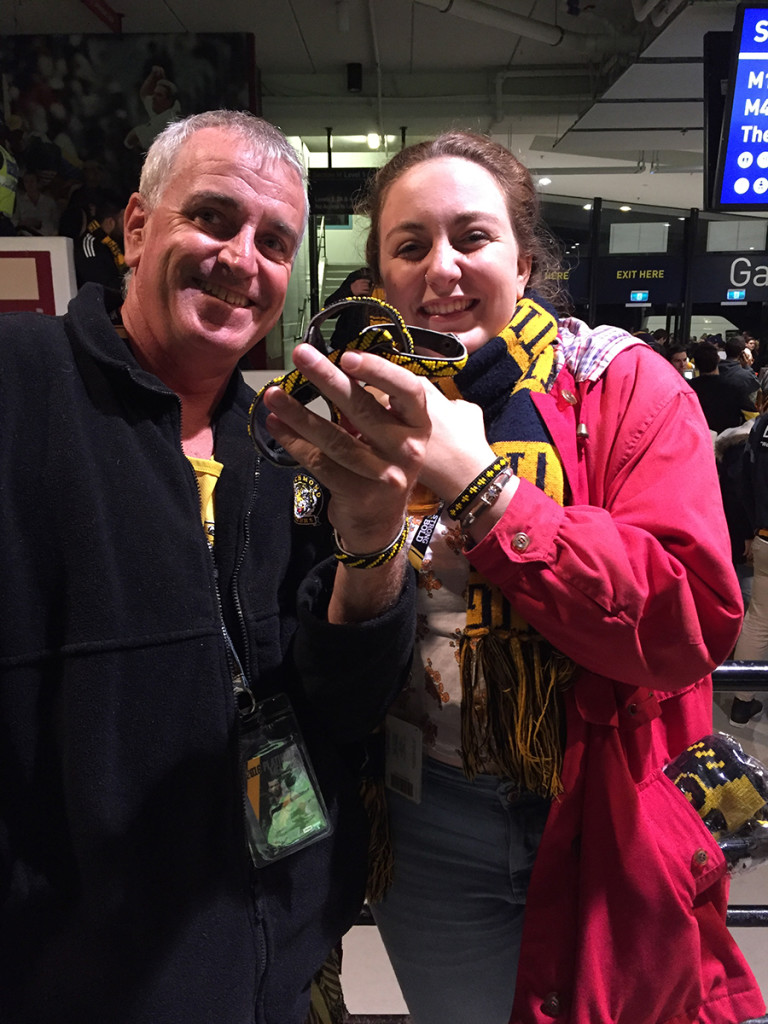 Father and daughter: Tiger Tommo and Caitlin at half-time, with their bounty of Kenyan bracelets, laced with ju-ju.

At half-time I caught up with Tommo, all the way from Kenya, and met his daughter Caitlin, living in Hawthorn and studying in the city, and he gave me some yellow-and-black bracelets made by Masai warriors, and he had said in an email that he paid the head medicine man a little extra to put some good ju-ju on them. All week I’d been telling him to bring over some monkey juice as well. The good stuff. From the fighting glands.

Late on Saturday night I gave one of the bracelets to our Mr 6yo, who was spellbound by the colours. We were in the bath, washing his muddied knees from Auskick.

And Skippygirl joined us also at half-time, and she was wearing her ‘TIGER’ tee, and the four of us stood in the concrete lungs of the MCG, behind the Punt Road end goals, all of us with our different life stories, all of us together for this short moment for a thing called Richmond. 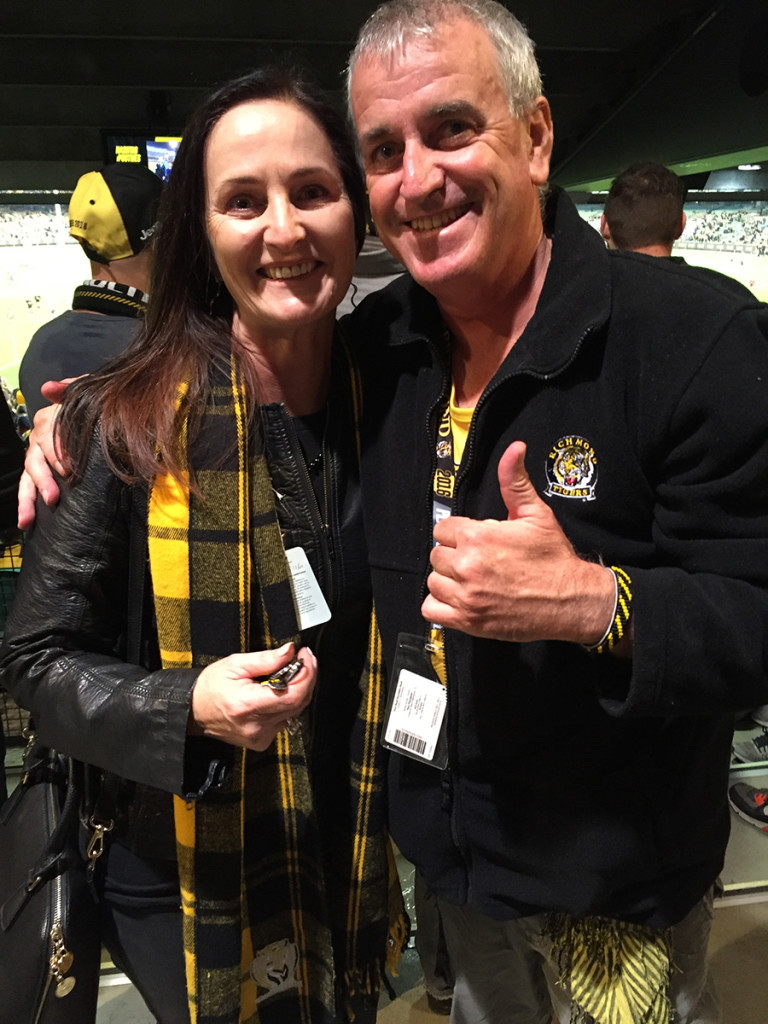 Two Tigers in the night: Skippygirl and Tommo, all smiles, with the game still to be won.

Tommo was staying the night in a nearby hotel. I told him, if we won, I’d join him afterwards at a pub in Richmond. I knew a spot at the London Tavern where we could have sat and drank and talked about the win all night.

But if we lost, I was going straight home to bed, to get ready for a job the following morning.

I replied: On the train home, dispirited. Would come out but I’m a leading hand at a primary school working bee in the morning. I don’t need a hangover. Good to see you Tiger.

Next time; I hope there’s a next time. 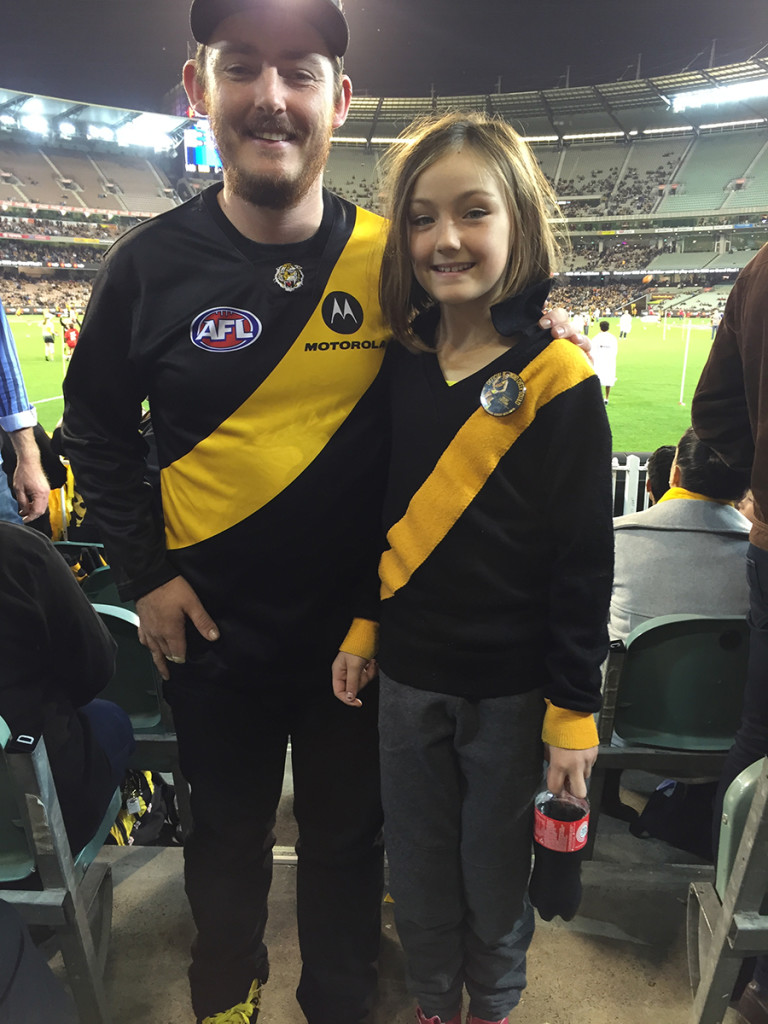 Yellow and black: John and Molly Carr, at the football on Friday night, she in woollen knitwear, researching material for their homespun podcast.

On Friday night I joined John Carr (aka The Holy Boot) and his daughter, Molly, in seats behind the Punt Road end goals for the last quarter. The two star in their own homespun, lo-fi radio show called the Dad & Mog Footy Pod, recorded early on a midweek morning – before family breakfast time, before the whole getting ready for school and work routine – and listened to by fans like us, everywhere. If you’ve not heard it, listen in if only for the opening jingle. It’s gorgeous. And the whole thing is charming – whimsical and plaintive and despairing – in a footy season that has given all us Richmond fans so little joy.

A realisation: I’ve recorded every Richmond game I’ve watched or been to this season. I’m yet to watch one of those recordings back.

Isn’t this usually a secret pleasure of the football season? The Wednesday night there’s not much on the TV so you’ll just watch the second half of the weekend’s game again, for the fourth time. Because surely there’s something remarkable in the play, in what our footballers did, that you’ve missed, and need to freeze frame, to appreciate the wonder and beauty.

Each and every game this year: delete.

So I joined John and Molly thinking my changed seating arrangements might be just the lucky charm that could help us get over the line. If we were to come back in the last quarter, get a run-on, and then run over the top of them, I wanted to be sitting down beside the cheer squad, across the aisle from Trout, near the fence, behind the goals where all the winning would be done. 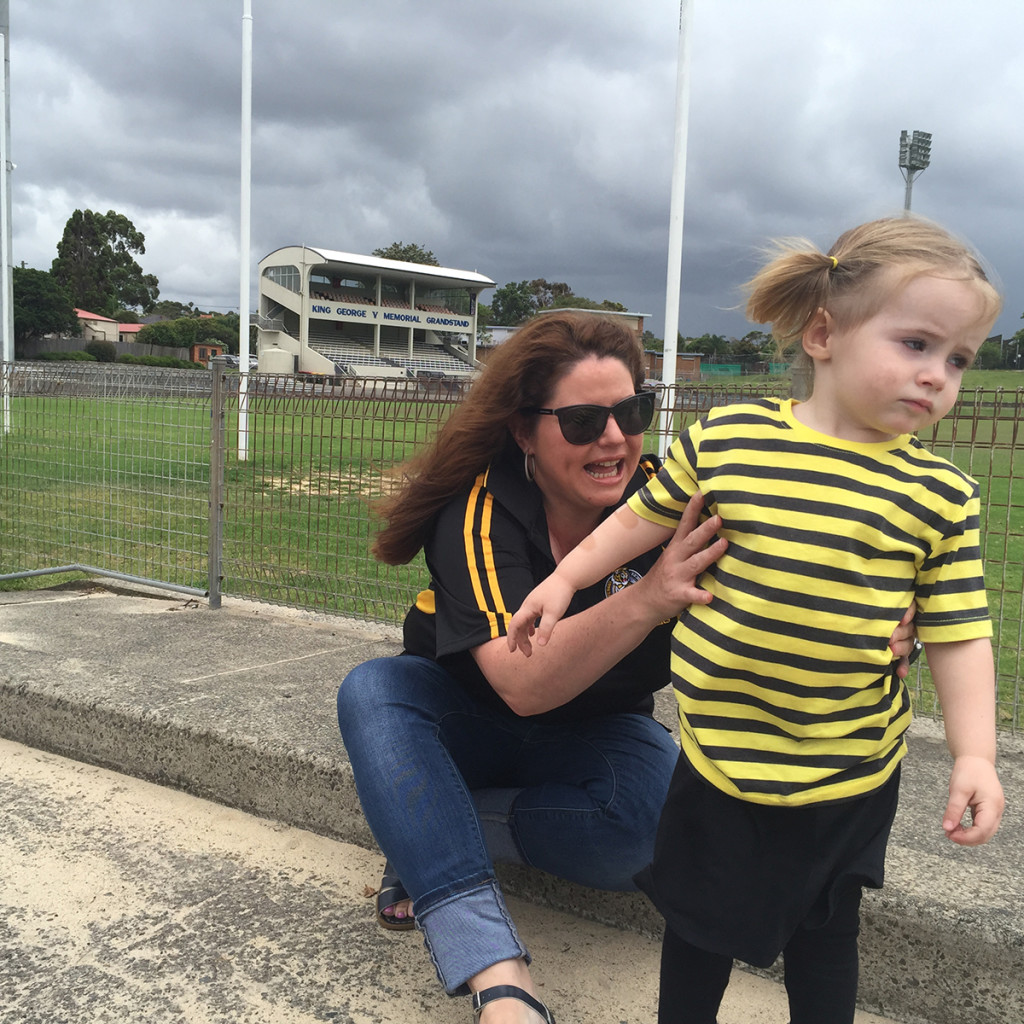 Looking for a smile: Fran and Hattie Doughton at Henson Park in Marrickville, Sydney, with storm clouds gathering before the season began.

Monday morning and I phoned Fran Doughton in Sydney, to talk football. I’d met her at Henson Park, in Marrickville, late last year, to ask about her Richmond story. She lives in Marrickville and we were house-minding nearby, around the corner from Henson Park, where I once played one of my best games of football, ever. It’s a beautiful ground. The grass is lovely. It’s protected, with a grandstand on one side and a hill on the other, and incoming aircraft flying low overhead.

I could never forget that Saturday afternoon I played there, centre-half-back, for Sydney University. It was one of those games where everything I did worked, including the miss-kicks. I had the ball on a string. Confidence grew with each touch. I felt as though I could control the game, manipulate the play.

If only it was always so easy.

When I met with Fran on that sultry mid-morning, bruised clouds gathering, a jet airliner with ‘Tiger’ on its fuselage came in low overhead and I thought it a sign; a good luck omen.

On Monday morning, Fran said how she’d been at a work dinner on the Friday, at a weekend conference in Bowral, checking the scores on the phone, as so many of us have done, and she needed to excuse herself at three-quarter time. The game was still up for grabs. We were a chance.

She dashed back to her hotel room, readied herself for a half-hour of glory.

“I feel like I mozzed the whole thing, by turning my television on,” she said. “As soon as I turned it on it all went bad.”

I told her how I’d changed my seating arrangement at three-quarter time. I thought I was the one responsible. 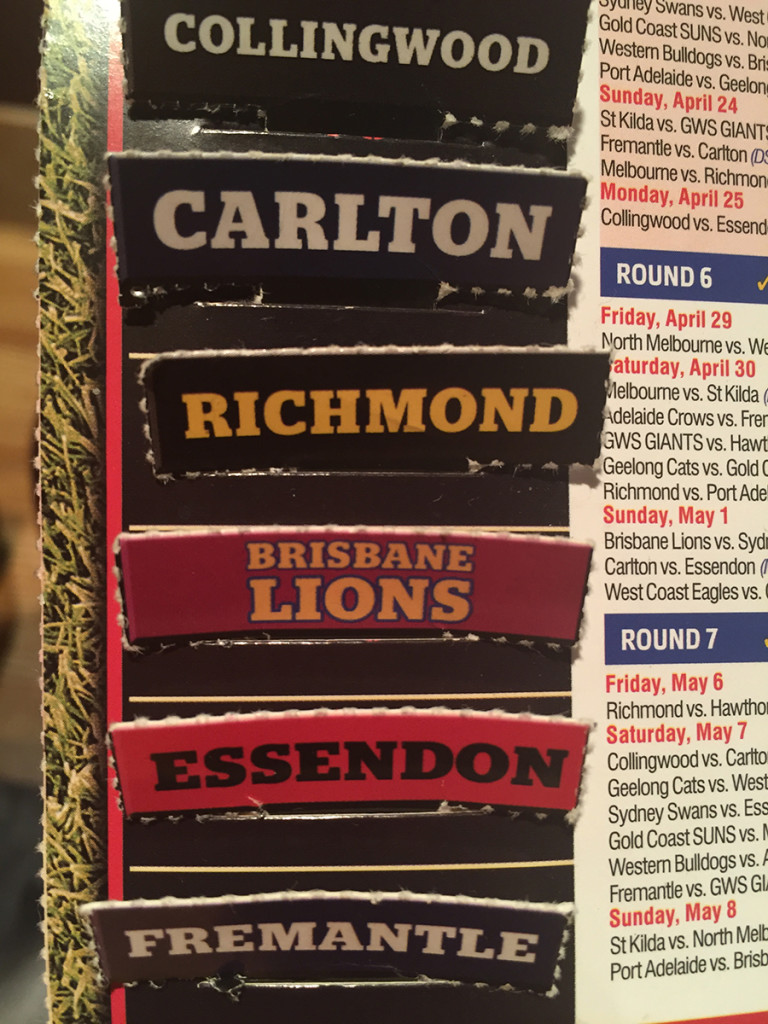 Bottom four: our ladder position before Friday night, and after.

They’re running through our tackles, said John. They’re making it look like a training exercise.

None of us had any answers.

My only solution, with ten minutes to go in the game, and a car wreck worsening, was to flood EVERY Richmond player into our defensive half. The game was lost; try something different. Self-consciously bottle it up. Construct a change, a circuit break. Learn something from the last ten minutes, how the game could be played in a different configuration. Make a statement. Don’t slide into defeat, meekly. Don’t give up. Put Jack at full-back. Throw around the chess pieces. See if something, anything, comes of it.

There’s a lot of talk about the “four walls” at Punt Road, about keeping it all in-house, about turning a back on the crowd.

What I learned from this week: sometimes it’s nice to go and fix someone’s front gate.

Postal address: down by the river beside Punt Road, in the low country.