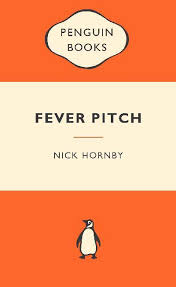 I am reading Nick Hornby’s Fever Pitch, yes I am. This is Hornby’s first book, and now, it has been reprinted probably dozens of times, continuously repackaged in a different cover with a different font and page layout – just in the manner of soccer teams and their endless slight variations on the team’s colours. The popularity of this book indicates its ability to cross genres and to attract audiences beyond those of just soccer fans or Arsenal supporters. Fever Pitch is the memoirs of a die-hard Arsenal fan in the pre-Wenger era. And for this, it serves an educative function for those who are only familiar with the attractive football as played by Wenger’s successive teams. The ironic chant of ‘boring, boring Arsenal’ is given its context here: the team was known for its conservative, defensive, ugly football – always being compared unfavourably to other teams such as Tottenham and Chelsea.

And so, Hornby’s memoirs ‘as an Arsenal fan’ trace the complexities of his fandom within the context of a dismal team giving little pleasure to their thousands of supporters. Disappointment and smashed dreams are the persistent tropes of the supporters life. Hornby traces this trajectory of disappointment from his childhood, teenage years and to adulthood. The fans are resilient and masochistic to the point of despair: they will themselves to watch Arsenal games in spite of the time, distance and helpless state of the team. Where their team falters, the fans stay loyal. Hornby writes, ‘the Arsenal team I saw on that afternoon [Arsenal v Stoke, 14th September 1968] had been spectacularly unsuccessful for some time. Indeed they had won nothing since the Coronation and this abject and unambiguous failure was simply rubbing salt into the fans’ stigmata. Many of those around us had the look of men who had seen every game of every barren season. […] Entertainment as pain was an idea entirely new to me, and it seemed to be something that I’d been waiting for’ (Hornby 2000, p.13). 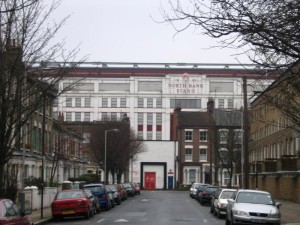 The stadium at the end of the street

Hornby relates his trajectory into football fandom and Arsenal fanaticism through the prism of his parents’ separation. The narrative is poignant for he writes openly, honestly and self-deprecatingly. The football provides a means for the young-Hornby to be together with his father, even if the conversation remains stilted. The football serves as a necessary distraction which they both can participate in. Nick’s fanaticism, though, becomes a point of difference and contrasts against the relaxed and fair supporter style of his father. Nick’s nervousness on game days becomes a kind of debilitating obsessiveness in which he demands to be at games (and in the seats) some two hours prior to kick off. On other occasions, he is unable to enjoy his scout camp out of knowledge that he is missing a home Arsenal fixture. Hornby most vividly articulates his sense of betrayal by his father, after he sees him applaud the opposing and underdog Swindon Town after they defeated Arsenal in the League Cup final at Wembley in 1969. Nick cares nothing for his father’s lectures on ideas of sportsmanship and fair play. He has been betrayed by his team who has let down his hopes of seeing them lift a trophy and perhaps more egregiously, his father who has seen it fit to applaud the those that smashed his dream. 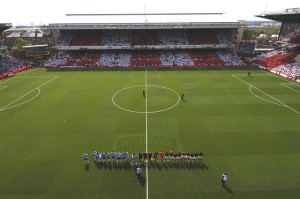 Goodbye to all that

Hornby’s style is transparent: making fun of himself and his plight. Hornby writes that since the book was first published some 20 years ago he wouldn’t have missed more than 20 games. Probably there are even more fanatical fans than him, who have missed fewer games over longer periods of time. In the meantime he has passed on his Arsenalism to his children: it was with them that he witnessed Arsenal’s defeat to Birmingham City in the 2011 Carling Cup Final. Going to the football offered an empty space in which Nick found it possible to be silent with his father. In one way or another he reproduces this pattern. Hornby’s book is humorous for it states what is obvious to many who have grown going to the football (whether it be Association Football or Australian): there is much suffering to be had before one experiences ever so fleeting and temporal moments of the sublime. But all that perennial suffering and boredom is somehow worth it.