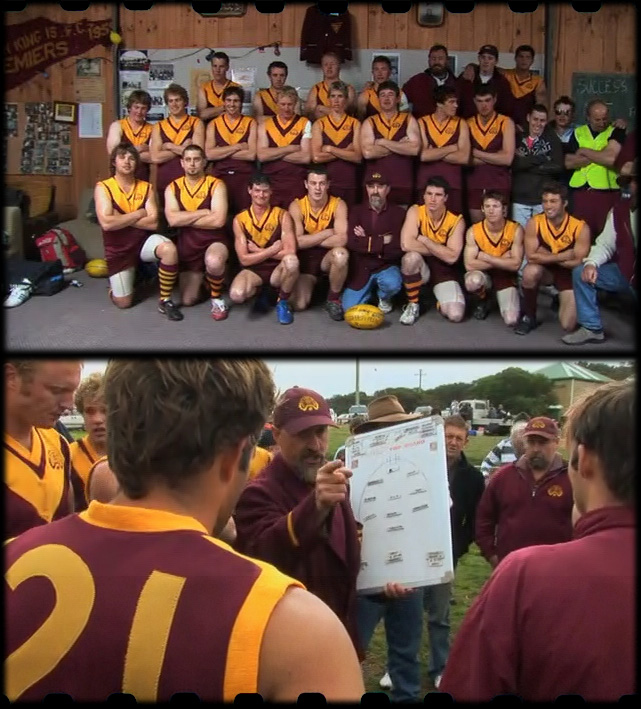 This is an old story from my family blog dated 2007 but worth re-telling here I think.

I found an old leather football on our lawn the other day, “Denzil Don” brand, with some signatures on it. I asked our elderly neighbour Judy if it was hers – her grandkids live down the hill, and I thought they might have had a kick in her back yard. It was Judy’s, and she had put it out for the garbage. Someone must have thought it belonged to our boys, and lobbed it over.I gave it back to her and she was on her way back to the garbage pile with it when I felt sorry for it, and asked if I could keep it. God knows we have too much of this sort of stuff already, but its just not right to throw out an old footy that meant something to someone once.It turns out the footy is from King Island, home of Australia’s only three-team football comp (Currie, Grassy and Norths). One part of the inscription that is legible says “presented to Brian Mather, Currie Captain”. Maybe it was a grand final ball.What makes this all more interesting is that the same week I found the ball, my employer Roar Film got the green light to make a TV series about country football. Filming starts this week. One of the five clubs/leagues featured is King Island. My footy is going to be a prop, and the crew might take it over with them when they are shooting, to see if any of the signatories are still on the scene.On King Island footy is only for the very hardy – it’s probably the windiest place in Australia. Apparently one character called Beany generally plays in his jeans and swaps jumpers each quarter, so that he doesn’t have to change ends.I have found there is a Denzil Don kindergarten in West Brunswick, Vic. Investigations still pending on the full D.D. story.

Back in February I found an old “Denzil Don” brand football on our lawn. It had some signatures on it. On inspection I worked out it was from King Island (home of Australia’s only three-team football competition).Coincidentally, only days after I found it, Roar Film got the go-ahead from SBS to make a series about country football, featuring King Island. The first shoot happened earlier this month. The crew took my footy over there to see what they could find out about it. They were blown away by the reaction. People gathered around and helped identify the names inscribed on it. Steve and Marie even met a couple of the footballers, now in their nineties. The ball was a memento of a game against either Flinders Island, or Redpa (near Smithton) – both of whom used to play annual matches against a K.I. combined side. One of the old blokes, named Snow Watkins, has just had his driving license revoked, as he is blind as a bat. He was caught one night driving his tractor to the pub. It’s now in the middle of a paddock with its tires let down. Snow’s brother Splinter has also had his driver’s license taken away, but he’s very proud that he’s still got his Kelp License.Roar will visit King Island again to film the grand final in September. I hope I will get a chance to tag along and carry some sound gear or something. It sounds like a really lovely, slow-paced place to visit. I have always got the impression that King is to Tasmania what Tasmania is to the rest of Australia.

The series was called Alive and Kicking and ended up featuring the Tamar Cats, Woodsdale, the Queenstown Crows and the King Island comp. It was shown on SBS in August 2008, as part of the Inside Australia series of docos. There is a synopsis and interview with my then boss Steve Thomas, here.

Somewhere I have a copy of the King Island Chronicle celebrating the ball’s return, and showing it in a glass case. I have searched for a photo of it as it was when I found it, but I don’t think I took one. I never did get to go along on the shoot on the island.