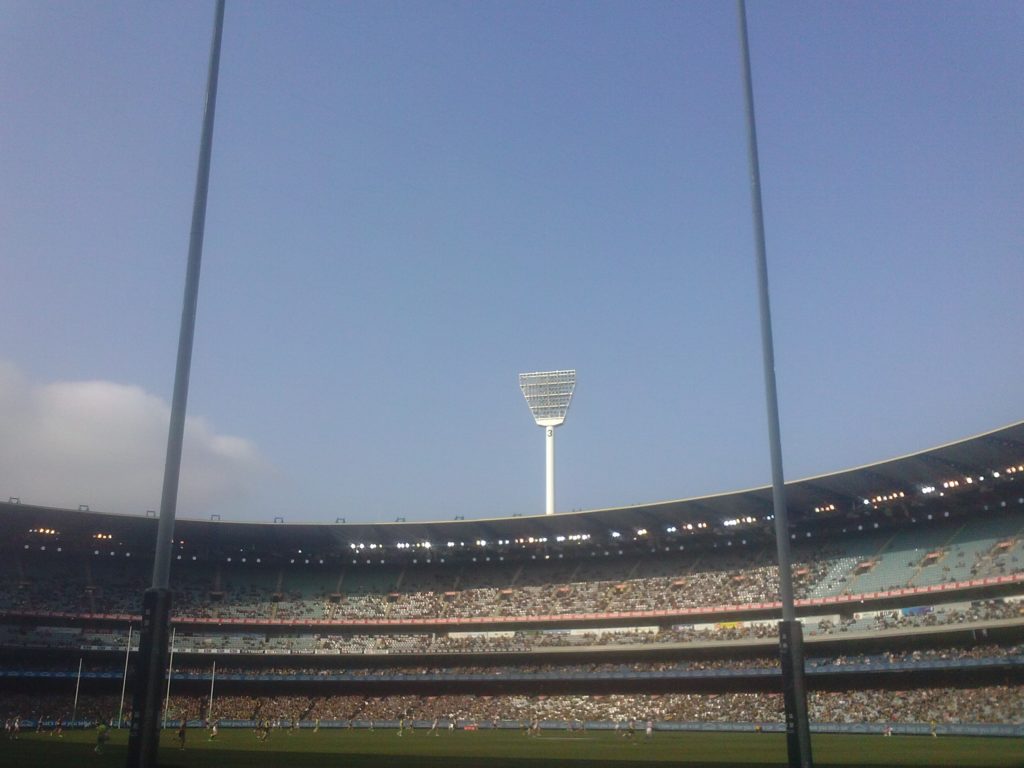 With a couple of minutes to go in the third quarter, I left the top deck of the Ponsford Stand and walked down the stairs. I heard some cheering as I reached the second level and then some angry shouting. A goal had been denied. I reached the exit and started walking around the southern concourse to go and sit on the ground level, behind the goals at the Punt Road End. I recognised a fan from other games; he is also someone who the TV cameras occasionally focus on. The man was wearing blue jeans and some kind of black Richmond training singlet. He’s well-muscled and has short black hair. He was shouting at anyone near him. ‘These fucking umpires, they’re not AFL standard.’ Blah blah blah. And then a response, ‘it serves us right. We’ve been playing like absolute arrogant dickheads for three quarters.’ He was a few meters ahead of me. He repeatedly shouted f#cking this, c#nt-ing that. It was a little troublesome. The man was seriously angry. The siren went for the start of the final quarter; and, in too much of a hurry I tried to enter the AFL Reserves only to have my ticket rejected. And by the time I entered through the right gate, I briefly saw a replay of Daniel high-fiving some other players. A good start, but I wasn’t going to get excited.

I had watched the first two quarters from the ground level at the City End. I was a few meters from the fairly well-represented Freo cheer squad. Behind me sat a row of casual Freo fans. A Freo hipster mansplained to his girlfriend, ‘Richmond fans are the worst. Behind West Coast.’ What the hell have we done to Freo? me thought. Oh yes, footy logic in full-flight: the fans of whichever one’s team is playing against are indeed the worst. Except I couldn’t find any reason to dislike Freo fans or even the Purple Warriors themselves. Next to me were a couple of Freo blokes: one had three children with him, the other had two. One was wearing a woollen Freo jumper: purple, green and white. Freo of the Anchor Era. He didn’t seem the conversational type so I didn’t trouble him for a photograph. The Freo cheer squad during the second quarter: Freo, Ole, ole, ole! Ole! They were seven points up and getting a little carried away. And Tabenar kicked a goal: Ooh ah Tabenar, say ooh ah Tabenar! All of this was hardly original, but they were into it. Enthusiasm and passion trumps originality, it seems.

Welcome back Titch. Beautiful handpasses. The thrill was back in the final quarter. The Punt Road End willed the team to the lead. I don’t know why the team celebrated Ellis’s goal as if they had won. Keep a grip, boys. A girl in front of me announced to the crowd: 20 seconds to go. I’m not surprised we lost. Who was that player who waltzed through the centre square like a flaneur on a Parisian street? It was wonderful to see the Freo cheer squad erupt in the manner they did. Good for them. This is (partly) what footy is about. We may be the worst fans in the league, but I’m not sure we deserved this. I’m not sure how the team can turn on and off their enthusiasm so quickly. I’m not sure how the coaches can’t have a readymade plan to congest the play in the back-half of the field to at least force one stoppage, which would have been enough to have won the game. Losing is not the problem. It’s how and when we lose. If we had started off with three losses and were now 5:3, we’d be pumped.

I looked around and saw two main postures being adopted by fans. One was ‘the Slump’ and the other was ‘The Explosion’. For the sake of disclosure, I had adopted the slump as soon as Ellis had kicked the goal. If we were to win, it was best to wait before celebrating

The Slump: the fan is reduced to being inanimate. The fan who falls into a slump is unable to move from her or his seat, whether it be at the ground itself or the couch at home or the bar stool at the favourite pub. The fan is overwhelmed with confusion: how could My Club do this to me? The defeat condenses all of the fan’s worries, anxieties, fears, pressures and the fan embodies them in a motionless, blob of a slump. As the Other Club’s song blasts out from the Stadium’s loudspeakers, the fan barely hears it. The song seems to be playing in the great distance, in the empty expanse that the Stadium has just become. The fan sits in what has turned into a vast desert, surrounded by others who also occupy their own deserts. The slumper, will at some point, trudge through the crowd: each step as slow as the previous one. Wanting to escape the scene of the disaster, but also not knowing how to face the outside world beyond the Walls of the Hallowed Stadium. Staying slumped in a plastic seat, in amongst the detritus left behind by the crowd, offers only a temporary refuge.

The Explosion: The fan is upright; jabbing his or her finger at the players. The fan is red in the face. His wild gestures loosen and ruffle his clothes. Spittle abounds. The umpire is a cheat. The opposition players are thugs. The fan’s own players are too weak and played like pussies. The game is too long. The siren went too soon. The fan abuses players standing some 70 meters away. The fan’s abuse is barely distinguishable for the impassive security guards who stare blankly into the crowd making sure that no-one runs onto the field to surrender himself to a $9,327 fine. The fan stomps his feet as he marches towards the exit at the Punt Road End. And while walking, he shouts at the fans from the opposite team who celebrate not only their win, but ramp it up just a little bit to bait those who are either slumped or exploding around them.

The aforementioned gentleman was nowhere to be seen. I didn’t want to imagine his anger and what might happen in his interactions later in the evening. His explosions at ¾ time perhaps suggestive of his mood at such a game where defeat had seemed inevitable and then victory almost certain only to be handed back to the aforementioned Purple Warriors. The coach says ‘we could have set up better’. The fans are bemused that the Team needs to be coached 20 seconds at a time and that there is no readymade plan in place for such a situation. On the path leading down past the Club, a mother consoles her son: ‘it doesn’t matter’. Nearby some semi-drunken young adults have a push-on with their fellow fans. For the fan who believes their team is somewhat adequate such a defeat had a degree of deliberateness about it. This is yet another defeat to be go straight into the Museum of Inglorious Defeats. The curator is busy.