Today I saw The Map in action live for the first time. At the world’s prettiest test cricket ground™ Tasmania took on a team representing the far-flung NEAFL, which covers the Northern Territory, Queensland, NSW and the ACT.

The traditional state football guernsey is known for obvious reasons as The Map. Its finest hour in recent times was when a Tassie state-of-origin side (which I think was 98% AFL players) beat a middle-weight Victorian side at North Hobart Oval in 1990. Darrin Pritchard, Simon Atkins and James Manson starred for Tassie. Jose Romero, Ross Lyon and Shane Kerrison wore the Big V that day. I guess “star-studded” would be an inaccurate description of that Vic side.

Some years later Richo wore the map in a game coached by then-Fitzroy coach Robert Shaw. This was a disaster and according to Richo, Shaw told the team they were a disgrace to Tasmania. 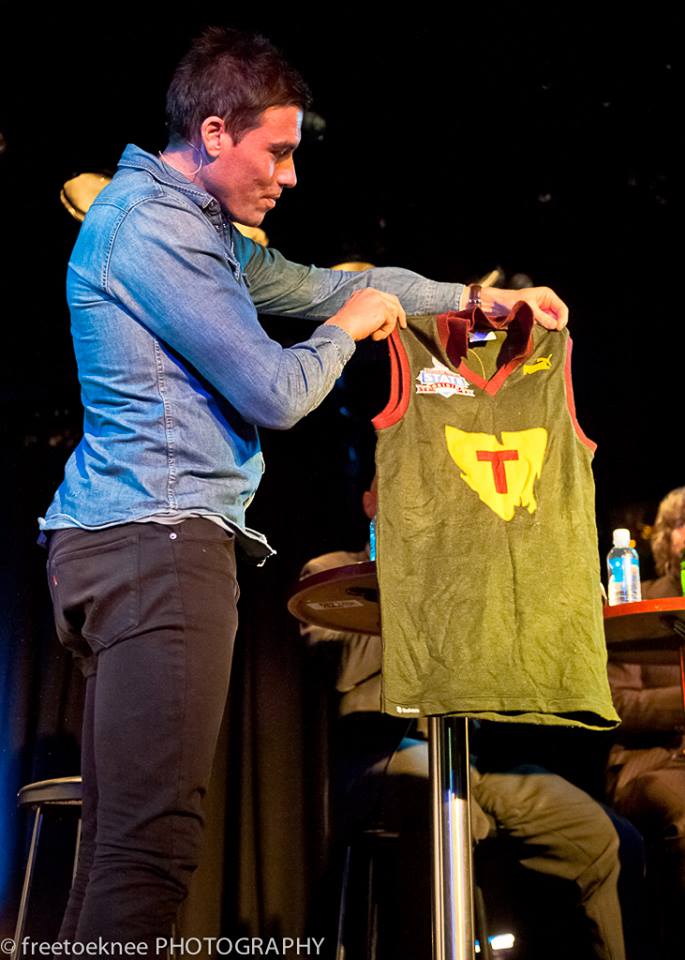 This man disgraced this guernsey.

It was a gorgeous day today, so when Rob rang and suggested getting over to Bellerive I quickly talked myself out of spending the afternoon at the computer. I got a park so easily I expected to find the crowd outnumbered by players. I’d guess it was about 1000 – there was plenty of room.

I arrived right on the halftime siren – so I rang Rob and told him to met me in the centre square. I got the footy out of my backpack, took a few running bounces, then spotted my man on the northern wing. My first kick (in Blundstones) was appalling, and lightly sconned a small child. He had a hoodie on for protection, and neither he not his dad seemed fazed.

Rob and I exchanged some Gerard-Neesham-era-Fremantle-style chip passes then shook hands and caught up on things. He and I were at art school together in the 80s. These days we are making an effort to prop up the Tasmanian football and pie industries as regularly as possible with our joint attendance at local fixtures. 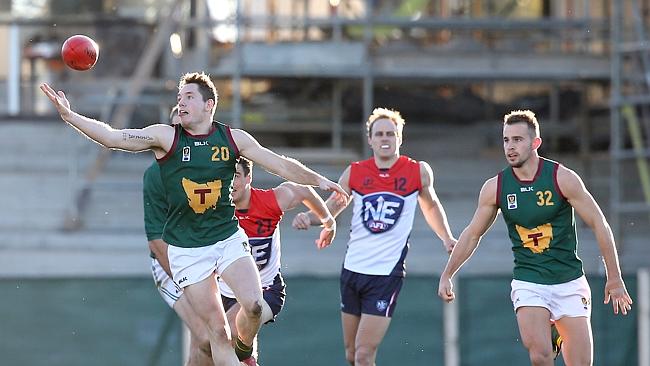 B.O.G. Brady Jones has it on a string for Tasmania. The NEAFL jumper lacks conviction.
Photo by Nikki Davis-Jones from The Mercury. 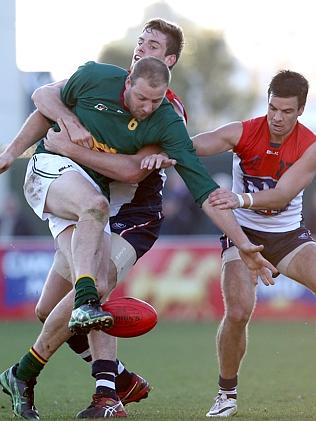 Former Essendon man-mountain Jason Laycock is back home playing for Burnie Dockers now. He represented the island state with distinction, getting 22 touches and 31 hit-outs.
Photo by Nikki Davis-Jones from The Mercury.

Tassie were 4 goals up at the long break but it had been more. The NEAFLs were clawing back into it. They wore a sort of Melbourne-clash-strip-esque jumper that totally lacked conviction, style, moxie or swagger. I was waiting for a mainlander to kick a clutch goal under pressure and look down to search the jumper for an appropriate symbol to grab, kiss or pump. Didn’t happen.

Rob and I searched for a mascot that could represent all of North-Eastern Australia. Carn the Scrub Turkeys? Carn the Skinks? We settled on Carn the Common Or Bottle-Nosed Dolphins which, although scarce around Canberra, do visit Jervis Bay, that enclave (or is exclave?) of the ACT on the NSW coast.

I can reassure Dons fans that Jason Laycock is still comically tall and still covers the ground rapidly with great, slow giraffe strides. He’s quite a sight, particularly on a pin-sharp sunny afternoon with a few sailboats in the background. There is a massive new stand under construction which will effectively blot out the sailboats – great news for those who hate the paint-a-picture-between-deliveries school of cricket commentary.

The third quarter was a lively contest with a proper comeback from the mainland cetaceans not looking out of the question, but Tassie finished the term with a couple of handy goals to McCulloch and Charlesworth. Jeromey Webberley (ex Richmond) was listed in the best but perhaps has dyed his hair – I didn’t spot him all day.

The Map romped through the last quarter when a lot of the NEAFL boys had clearly forgotten each others’ names again and the team spirit just wasn’t there. One of them with his head over the ball at center-half-back got caught high and dumped, and looked up blearily to see his assailant traipse into the goalsquare and test out the toughened glass of the D. C. Boon First Class VIP Balcony Superbox.

At the final siren most of the crowd climbed over the boundary fence with their footies and enjoyed running around on the excellent international-standard outfield. Rob teed me up with a pass into space which I ran onto, and dobbed one from about 35 metres, with a low-key celebration.