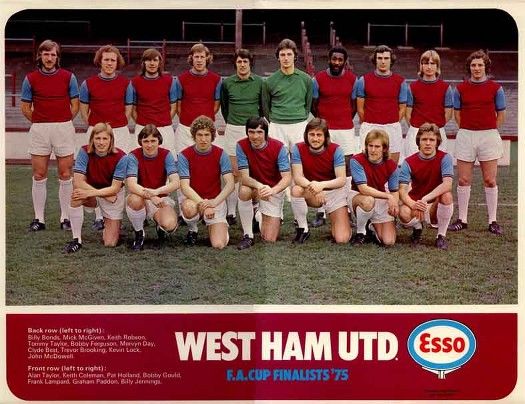 The first footy game I ever saw is lost in the mists of time. The first soccer match, on the other hand, is cemented in my mind. The 1975 FA Cup at Wembley, long haired Alan Taylor scoring twice for the claret and blue of West Ham against the feeble white of Fulham. And with that I became a West Ham fan.

I cannot honestly swear to have followed them through thick and thin. In recent years they have been strangers to Free To Air television, and its largely been through the Guardian’s Football Weekly podcast that I have kept in touch with their travails.

But, I do love West Ham. They trumpet their legacy of playing ‘beautiful football’ – three of the England 1966 World Cup winning side were from Upton Park. To be fair they have abandoned ‘beautiful football’ whenever it has suited them, but the current side is living up to that legacy. They are playing beautifully, and they are winning, just at the precise time some of the perennial big clubs are struggling. Chelsea started the season so badly, they sacked The Special One. Manchester United are in a funk, and have apparently lined up The Special One to take over next year. Manchester City seem to be in a holding pattern as they wait for Pep Guardiola to arrive for next season – the players seem to think it would impolite to win the league with the outgoing manager. Arsenal just can’t be trusted to win anything. Liverpool – not sure they are still in the Premier League, I’ll have to check.*

The real excitement is all about Leicester, who at this point last season were odds on to be relegated. They weren’t, but they sacked their manager anyway (more for off field issues than anything), then hired a man who most football followers would characterise as a Harmless Grandpa in Claudio Ranieri. They are now nearly 3 wins clear on top of the table. Even so, the hardest heads are tipping they will falter and be run over at the end by … Spurs. Usually hovering between 5th and 8th, Spurs have never really seemed like a threat to muscle past the big money of the Manchesters, Chelsea and Liverpool.

OK, back to West Ham now. They are fifth. I don’t think they can win the league from there, although its mathematically possible. But they are a bloody good chance of a top four finish and that means; Champions League. On a practical level that brings an influx of cash but on a football level it means Barcelona, Juventus, Bayern Munich, Paris Saint Germain, Real Madrid. I might get to watch Auckland’s own Winston Reid clean up Ronaldo, now that would be really something.

Not only are the Hammers on the cusp of [operatic choir] The Championsssssssssssss but they only have to get over a disinterested Man Utd to meet Everton in an FA Cup Semi Final. In the other semi, the very beatable Crystal Palace play Watford. In other words I am predicting that West Ham are going to win the FA Cup in 2016. They last won in 1980. What else happened in 1980?

OK, sure Fleetwood Mac were number 1 with Tusk for about 6 months but I was thinking more of this;

*That was a joke Liverpool fans of course you are still in the Premier League AND the highly regarded Europa Cup which was almost won by Fulham.