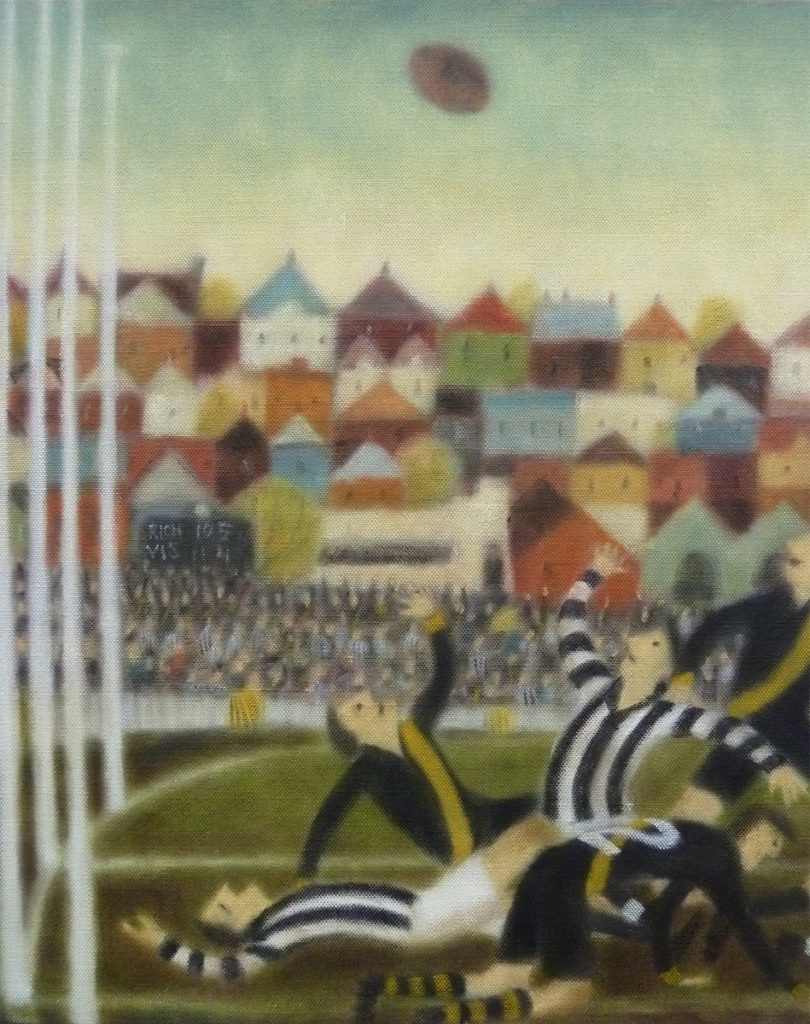 Waiting on a train at Richmond Station at 10.11pm last Thursday night, I posted a Tweet:
And our crowd walk lightly from the game, with all the conversation, the song, the optimism. We’re believing again, and it feels good.

I’ve heard it said the best time of the week for a professional football is the hour or so after a win, drinking in the heady cocktail of joy and relief, before all the aches and pains creep up, bruises well, joints stiffen, fatigue hits, and the mind wanders to recovery and next week. A fleeting moment of complete insouciance; a job well done, a basking in the glory.

It’s much the same for us fans.

The walk from the floodlit stadium is so much better after a win. Footfalls are lighter. The stars above twinkle brighter. All the talk is of the future. Even the Yarra Park grass seems lusher, and somehow greener in the dark.

None mind too much the bottleneck crowd and shuffling wait at Richmond Station after win. It’s an opportunity to linger, on an experience, in a place, the stadium glowing still through the trees.

On the train, going home, we check our phones. Look at the stats. Who did what. Log onto Facebook, Twitter, the fan forum feeds, see what others are saying, how they saw the game, was there something we missed, needing to consume every little detail. Conversations are overheard. Three elderly women, standing by the carriage door, all Magpies, chat away merrily, philosophical about their loss, and among themselves they talk audibly about our Dusty, and they cannot help themselves. They’re drawn to him, as we are. They find him as beguiling as we do. One of them says she hopes he wins the Brownlow.

Richmond hearts in the carriage gladden.

The train lurches, jolts, trundles over the river, doors open-close at each stop, the crowd thinning the further we go from the game.

Getting off, wearing our colours, there’s a pang of pride. Leaving the group, the bright lights of the carriage, the station platform becomes a stage, a public place for the passing crowd, for the short victory walk into the night. It’s always better after a win. Check for familiar faces. Often, I see dear old Brenda, say hello, have a quick chat. Or there’s George Megalogenis, a voice of reason, a calming influence, rational in his support for this wayward club of ours.

I skip home alone, busting for a wee, hoping my partner might still be up, knowing she’s been watching it on TV, wanting to share the night – the football – with her.

She’s up alright, and buzzing. She loves the start of the footy season when the grounds are dry and the earth warm, and games fast and fluent. And she loves Dusty. (She flew to New Orleans for a history conference this week, but not before showing me a photograph of Dusty in full flight, arms and legs outstretched, about to kick the ball, telling our seven-year-old boy how much he looked like a dancer).

I watch the last quarter again. She sits at the kitchen table doing emails, looking over my shoulder. She wants to hear what Dimma says in the ‘presser’. Probably even more than me. 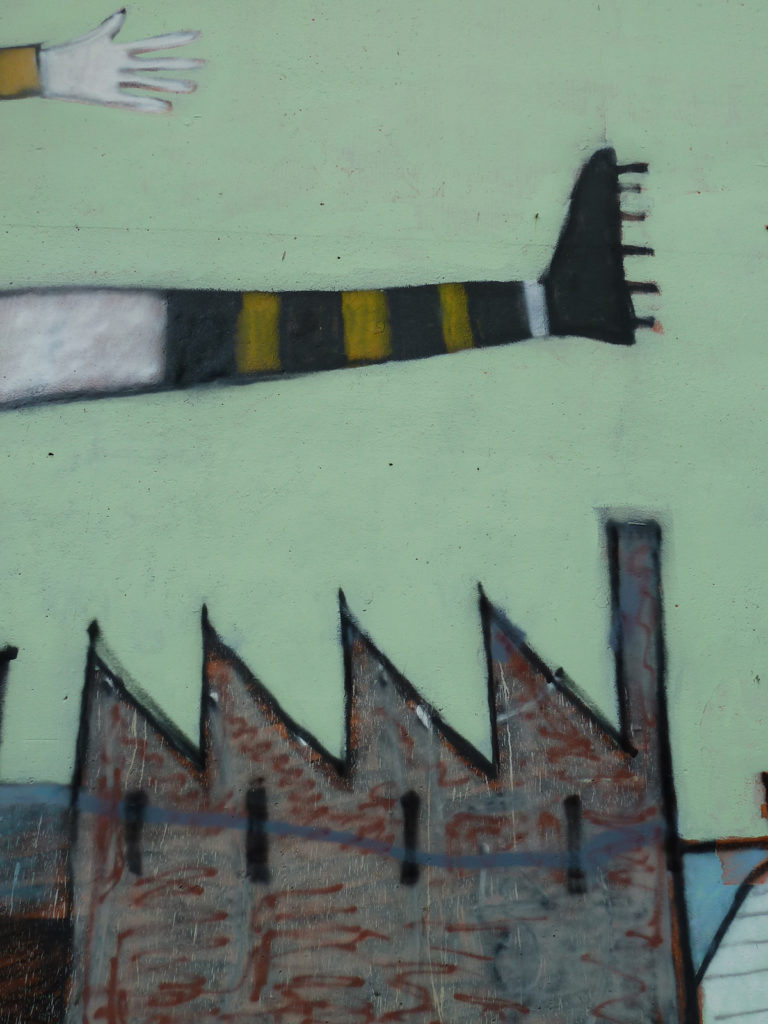 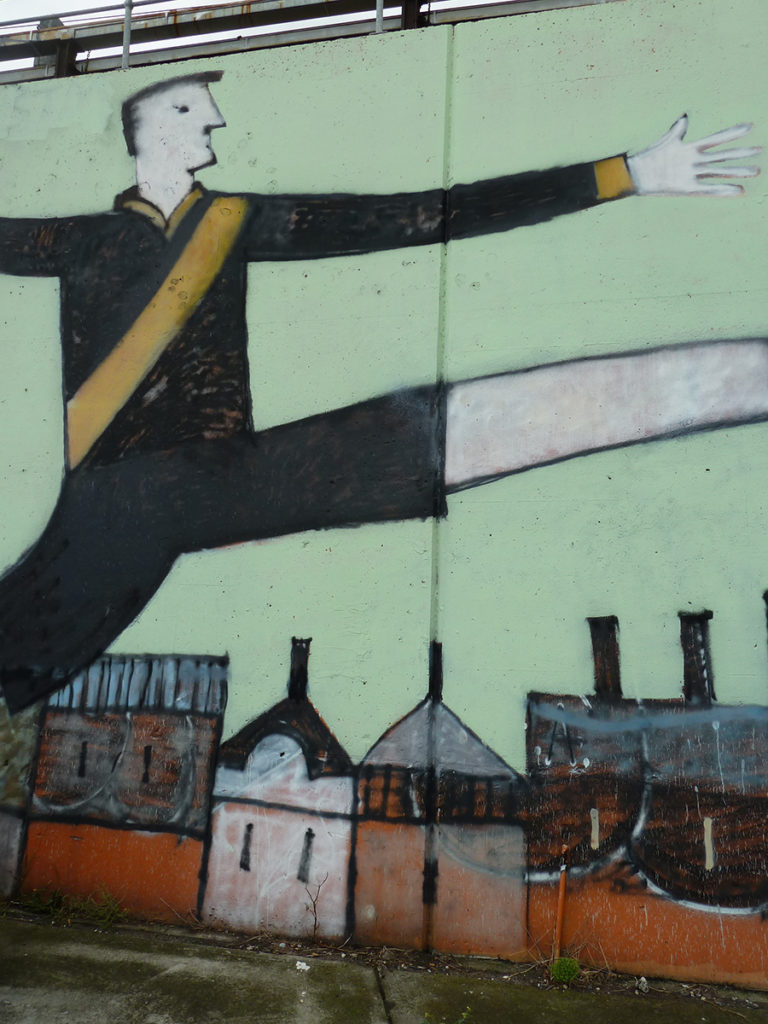 Friday morning, I ride my bicycle to Richmond to meet an artist and talk about the visual landscape of the suburb. Its built texture. Its colours and shapes, and the Dimmey’s clocktower, and the church spire on the hill.

Later, I ride down Swan Street to a mural he once painted, a public artwork I’ve always admired, to study his streetscape more carefully.

Richmond win a game of football on Thursday night and on Friday morning I’m looking wistfully at the oversized yellow and black hoops on a sock, and boot studs, and a leg floating above the rooftops, painted on a wall near Richmond Station, and it is wonderful. 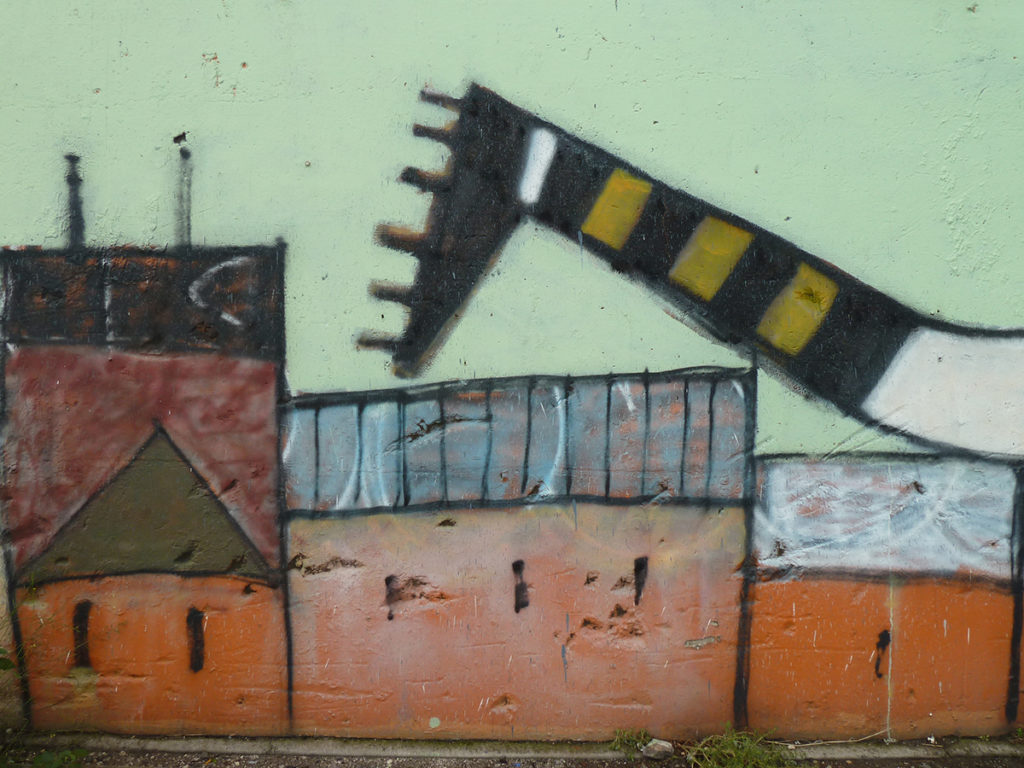 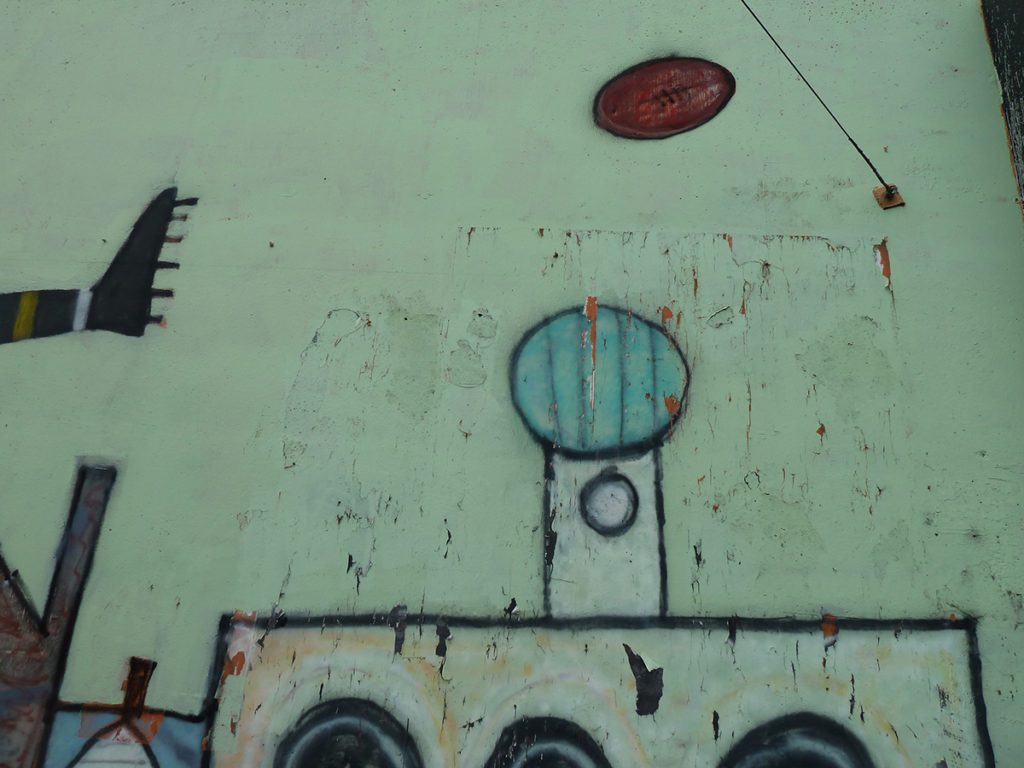 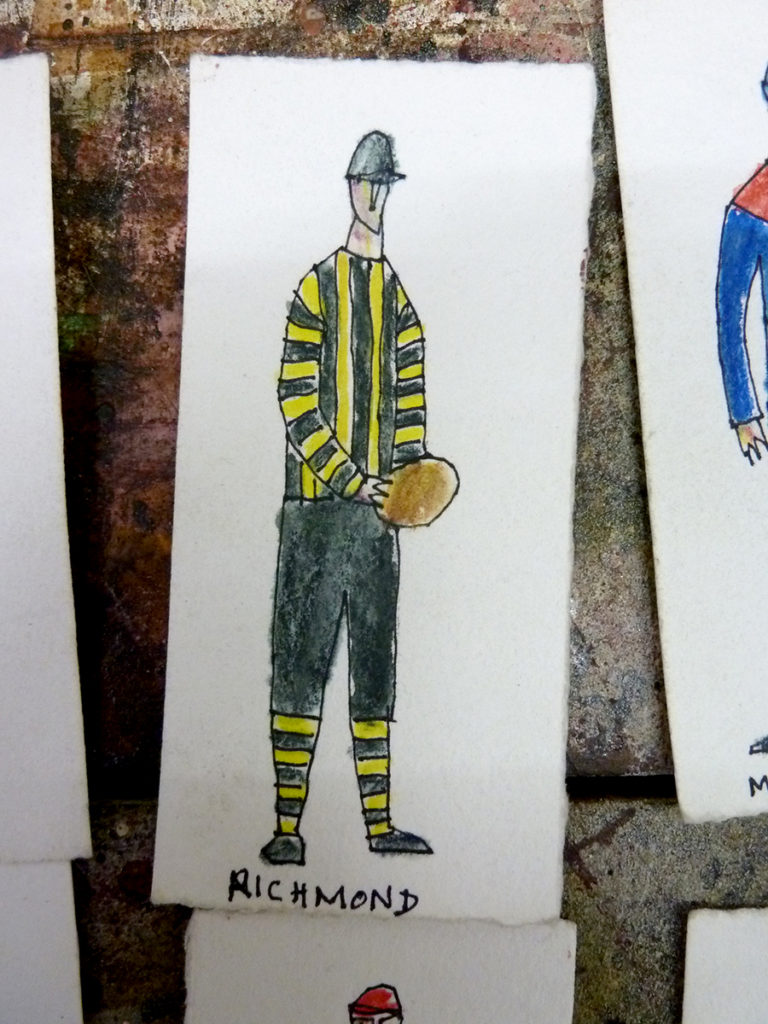 Richmond is playing better football this year, and it’s pleasing to behold. No more crabbing sideways, going backwards. The rot of last year all began with this fixture. It wasn’t the coughing-up of the lead, but that didn’t help. It was the method. The quizzical sight our captain leaving his man and running twenty metres backward to demand a dinky little handball receive off one of our kickers. Or the vision of our star full-back, late in the last, switching play, kicking the ball deep into a back pocket, compounding the pressure, passing the buck, leading to another goal to them.

Bless us that this counter-productive playbook has been torn up, buried.

Dimma has seen the cliff edge, and a tiger has changed his stripes. No more dour defence at all costs. He’s freed them up. Let them run. Trust their instincts. Carry the ball, park Dusty up forward, kick it long to him, one-on-one, give the crowd something to delight in, a memory to carry home with them into the night.

Too much of football is justified, explained by numbers. Coaches look for logic, game theory, immutable truths in the streams of stats. Inside 50 count, disposal efficiency, contested possessions, etc, etc.

But football clubs are also in the business of hope.

And I go to bed thinking of Toby Nankervis, our warhorse, how much he’s needed, hoping he can battle-on all year. I’m addicted again.

And I hope for another sweet train ride home this Saturday afternoon, me and our 7-year-old boy, at his season’s first game, basking in the glory of football, in the joy of our team winning.
Go Tiges!